A List of Foods Rich in Vitamin K: From Kale to Spring Onions 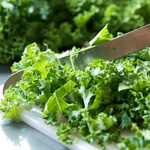 Vitamin K is the name given to a group of fat-soluble vitamins that are primarily responsible for aiding blood clot formation in our bodies. In fact, the reason why vitamin K was never named vitamin F (the next logical step after vitamin E) was to emphasize its central role in blood health: the “K” actually stands for “koagulation,” the German word for “clotting.”

In healthier times, deficiencies in vitamin K were rare since traditional diets incorporated a lot of leafy green vegetables – the world’s greatest sources of the vitamin. As processed food began to dominate our dinner tables in the twentieth century, however, deficiencies in this important nutrient, which can lead to easy bruising, nose and gum bleeding, and weakening of the bones, started to emerge. Fortunately, preventing or correcting a vitamin K deficiency is simply a case of eating more whole foods that are rich in it.

The Best Sources of Vitamin K

Kale – Kale is commonly regarded as the king of vitamin K, and it is the first vegetable people should turn to when suffering from a deficiency. According to Self‘s “NutritionData,” one ounce (28 grams) of cooked kale supplies our bodies with 229 micrograms of vitamin K, which is a whopping 286 percent of our recommended daily intake (RDI). Kale also contains high levels of vitamin A and vitamin C, which are antioxidants that guard us from accelerated aging and degenerative diseases.

Note: While naturally-sourced vitamin K is non-toxic and can be consumed in excess without problems (unless you’re on blood thinning medications), kale also happens to be rich in oxalic acid, a toxic organic acid that is known to bind itself to calcium in our bodies, causing muscle pain and other issues. Therefore, consuming kale on a regular basis should be avoided when possible.

Herbs – Herbs have long been regarded as more of a medicine than a regular food, and a cursory glance at their nutritional profiles helps explain why: Packed with more vitamins and minerals per weight than even some of the most celebrated vegetables, herbs can help transform even the blandest of meals into powerhouses of nutrition. This is especially true of basil, sage, and thyme, which are particularly rich in vitamins – including vitamin K. In fact, weight-by-weight, sage actually contains higher concentrations of vitamin K than kale itself. Remember to stick to non-irradiated herbs if you prefer dried herbs to fresh ones.

Spinach – The bright, vibrant-looking leaves of the spinach plant are famously packed with nutrients, and cooking them actually seems to increase their nutritional value. One cup of cooked spinach provides us with 138 micrograms of vitamin K, or 173 percent of our RDI. Our bodies will also receive large quantities of vitamin A, folate, fiber, manganese and, of course, iron – the essential macromineral for which spinach is best-known. Spinach is also high in oxalic acid, however, so don’t go overboard.

Spring onions – Spring onions, also called scallions or green onions, are popular in salads and as toppings on soups and stews. One ounce of them contains 58 micrograms of vitamin K, or 72 percent of our RDI. They’re also good sources of calcium, iron, potassium, and manganese. Try and eat them raw when possible – cooking them depletes their mineral content.

Broccoli – Broccoli has always been the darling of nutritionists. Indeed, regular consumption of the plant’s flowering head has been consistently linked to improved brain function, regulation of blood pressure and, thanks to its significant carotenoid content, treatment of deteriorating eyesight, poor immunity, and even cancer. We can also add “improves blood health” to that list, however, since one ounce of cooked broccoli supplies us with almost 40 micrograms of vitamin K – enough to meet half of our RDI.

Brussels sprouts – They might taste disagreeable, but our grandmothers were right: Brussels sprouts really are good for us. Aside from containing more vitamin C than most other greens, these little round vegetables are also bursting with vitamin K – 39.3 micrograms of it per ounce, to be exact. You could help disguise their taste by sauteing them in a garlic broth, pickling them, or drenching them in olive oil (which will also add some beneficial fats to the meal).