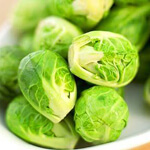 The Brussels sprout is a plant widely cultivated in Europe for its edible green vegetables. These vegetables, which resemble diminutive cabbages, are usually steamed or boiled and then added to meat-based dishes, including traditional Christmas dinners.

It’s not an accident that Brussels sprouts, like other cruciferous vegetables such as broccoli and kale, have a famously unpleasant taste. These vegetables are packed with so many antioxidants, minerals, and vitamins that their appeal to our taste buds was always destined to be limited. Their appeal to the rest of our bodies, however, is considerable.

Rich in essential vitamins – One serving of Brussels sprouts (half a cup) supplies us with 20 essential vitamins, including 48 milligrams of the important antioxidant vitamin C, numerous B-vitamins, and 604 international units of vitamin A. Vitamin A helps our retinas detect color, while the carotenoids zeaxanthin and lutein – which sprouts also contain – help filter light so that our retinas aren’t exposed to harsh ultraviolet rays. For this reason, Brussels sprouts are especially good for growing children and adults with deteriorating eyesight.

Half a cup of Brussels sprouts also contains 78 micrograms of vitamin K, a fat-soluble vitamin that is synthesized by plants and commonly found in leafy green vegetables. Vitamin K plays a major role in blood clotting and is often applied to the skin to accelerate healing or to reduce swelling and bursting. A deficiency in vitamin K results in several blood-related issues, including nose bleeding, heavy menstrual bleeding, and gum bleeding.

Cancer-fighting properties – According to the Linus Pauling Institute, Brussels sprouts are rich in glucosinolates, compounds that belong to a group of phytochemicals called isothiocyanates. Glucosinolates are proven to stimulate apoptosis (programmed cell death) in cancerous cells and also help eliminate potential carcinogens from the body.

That said, research published in the 2003 edition of the British Journal of Nutrition showed that boiling sprouts and other cruciferous vegetables for just 9 to 15 minutes decreases their total glucosinolate content by 18 to 59 percent. Consequently, the researchers recommend steaming or stir-frying them to help retain their cancer-fighting properties.

High in fiber – Of the 6 grams of carbohydrates found in half a cup of Brussels sprouts, 2 grams come from dietary fiber. Fiber’s laxative qualities are well-known, but it has also been shown to reduce blood cholesterol, reduce the risk of cardiovascular disease, and even guard us from type 2 diabetes.

Brussels sprouts are surprisingly versatile, and there are many ways to disguise their taste. You could pickle them, saute them in a garlic broth, or drench them in olive oil and serve them as a side dish. You could even make a “cruciferous salad” consisting of chopped sprouts and other green vegetables mixed with maple vinaigrette, cooked sweet potato, and fresh herbs such as rosemary and basil.