Organ Meats: The Most Nutritious Parts of the Animal

Mention the words “organ meat” (or, better still, “offal”) to the average person and they’re likely to curl their faces in disgust. Eating the organs of animals is gross, we keep getting told, and only a caveman would do it.

Well, maybe we need to eat like cavemen again. After all, cavemen were seldom afflicted with type 2 diabetes, hypertension and other modern diseases that stem from unnatural diets.

The simple fact is that organ meats are the most nutritious part of the animal, and our hunter gatherer ancestors knew it. Heck, most of our grandparents knew it. It’s only within the last 50 years or so that consuming organ meats became somewhat taboo in the West, largely for aesthetic reasons.

This article takes a closer look at the nutritional profiles of the four most popular organ meats available today (liver, kidneys, heart and brain), occasionally citing differences from animal to animal. Since little scientific research has been conducted on the health benefits of organ meats, I’ve mostly focused on their vitamin and mineral content, which is probably what most readers are interested in anyway.

And so, with that said, put on your surgical gloves… we’re diving right in! 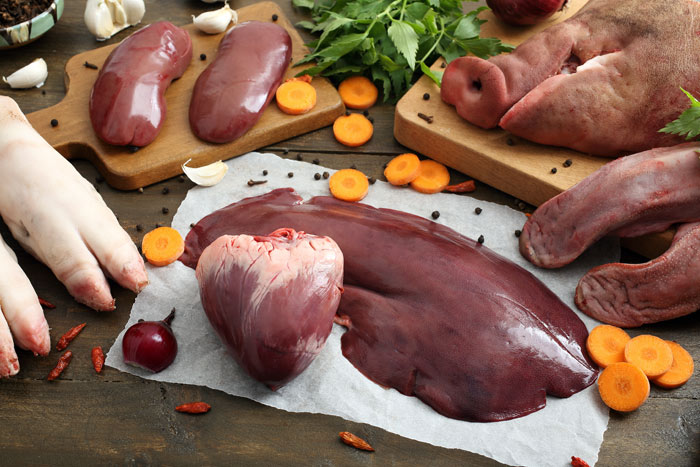 Warning: Some of the foods mentioned in this article might be unsuitable for vegetarians

Why Is Liver Good for You?

Out of all the animal organs we consume, liver is the most nutritious by far. Aside from being one of the best natural sources of brain-boosting vitamin B12 and vision-boosting vitamin A, liver is also packed with countless other essential vitamins and minerals that promote good health. 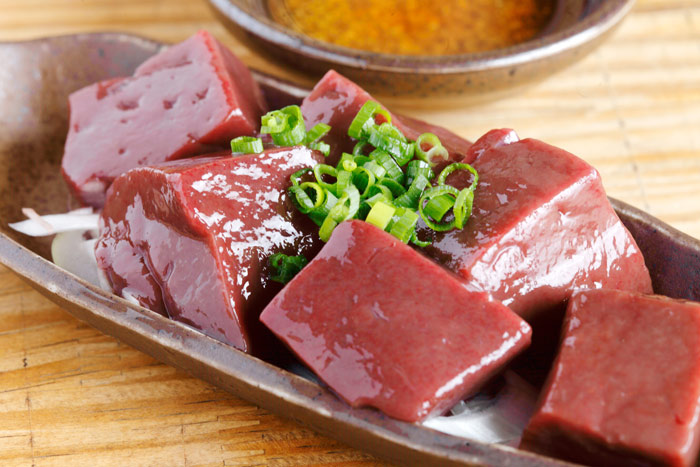 Unsurprisingly, the livers of ruminants are a little more nutritious than the livers of chickens, and there are some minor differences in their nutritional compositions. Chicken’s liver, for instance, contains more folate (but less copper) than cow’s liver and lamb’s liver. Ultimately, though, all three animals produce livers of significant nutritional value, and you can’t go wrong with any of them.

Why Are Kidneys Good for You?

An excellent source of vitamin B12, riboflavin and selenium
A good source of protein, iron and phosphorus
A minor source of thiamin, niacin, vitamin B6, folate, pantothenic acid, zinc, copper and manganese

Kidneys contain high levels of B12, riboflavin and selenium, and much lower levels of all other nutrients, making them an inferior overall source of nutrition compared to liver. However, they’re still nutritious, and they taste a little less disgusting than liver. 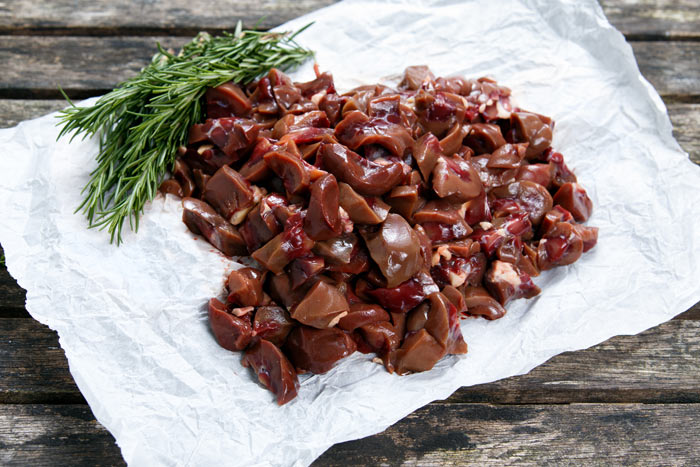 Chopped kidneys can be incorporated into countless meals

Judging from the data, it’s safe to say that lamb kidneys are the clear winner regarding nutrient content (their B12 content is especially impressive). Pork kidneys, however, are highest in the antioxidant selenium. Beef kidneys are nothing special in comparison, though they’re usually the cheapest and easiest to obtain.

Many people are concerned about eating livers and kidneys because they assume that these organs retain the toxins they filter. However, this isn’t true. Though livers and kidneys do neutralize toxins, they don’t store them. In fact, it is the liver’s job to store essential nutrients (including vitamins A, D, E, K, B12 and folic acid, as well as certain trace- and macro-minerals like iron and copper) for biological use… which is why liver is so good for us.

Toxins that the body cannot neutralize or eliminate are actually stored in the animal’s fatty tissues. For this reason, I always recommend cutting the fat off conventionally-raised meat.

Why Is Heart Good for You?

An excellent source of vitamin B12 and riboflavin
A good source of protein, iron, zinc, selenium, phosphorus and copper
A minor source of niacin, vitamin B6 and pantothenic acid

Hearts contains a similar nutrient composition to kidneys (i.e., they are high in B12 and riboflavin, then contain smaller amounts of other nutrients). Once again, the ruminants beat the chickens in the nutrition department. Actually, judging from their rather measly profile, I wouldn’t bother with chicken hearts at all. 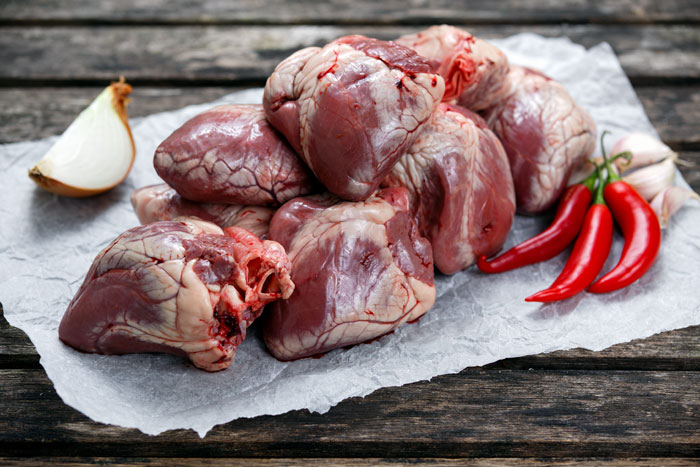 Since animal hearts taste like roasts (and can be cooked like them), they tend to be the most appetizing and accessible organ meat for newcomers. In fact, heart is almost indistinguishable from regular muscle meat in taste and texture.

Why Is Brain Good for You?

An excellent source of vitamin B12
A good source of protein, selenium and phosphorus
A minor source of iron, vitamin C, niacin, riboflavin, pantothenic acid, copper and zinc

Out of all the organ meats we consume, the brain – which is characterized by its creamy, fatty texture – is arguably the least appetizing. Brains are also the organs with the most fear-mongering attached to them. In the United Kingdom, for example, cow’s brains have become closely associated with bovine spongiform encephalopathy (BSE), or mad cow disease, a fatal neurodegenerative disease that can be transferred to humans by consuming the meat and organs of infected cows.

While the chances of contacting mad cow’s disease are small, I still wouldn’t recommend eating cow’s brains… or the brains of other animals, for that matter. Why? Because virtually all the essential vitamins and minerals found in brains can be found in higher quantities in livers, kidneys and hearts. Why settle for fourth best? 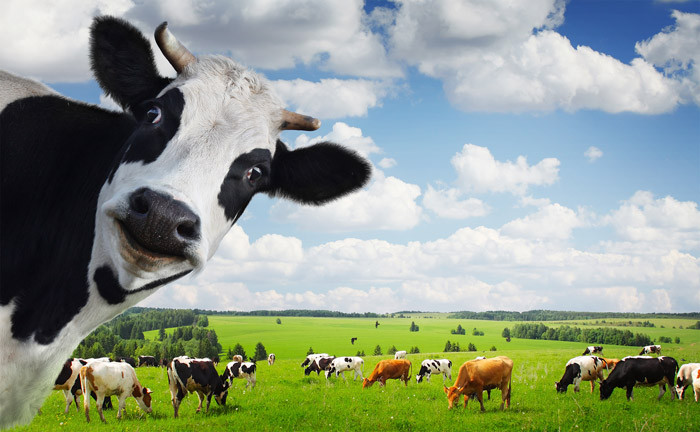 You probably won’t become a mad cow with Mansonesque eyes if you eat cows’ brains, but why bother with them when livers are much more nutritious?

Other Organ Meats of Interest

While not as popular as the four organ meats listed above, the following animal products are regularly consumed by many cultures around the world:

Tongue – Once the skin of the cow’s tongue is removed (which is responsible for its trademark hardness), you’re left with a surprisingly lean roast that is perfect for slow cooking. Sadly, tongue is a little lacking in nutrition, with only its protein and fatty acid content standing out.
Tripe – Tripe is defined as the stomach lining of ruminants and, quite frankly, looks as disgusting as you’d expect it to look. Furthermore, if its NutritionData profile is to be believed, tripe is also lacking in most vitamins and minerals. I think I’ll give this one a pass.
Gizzard – The gizzard is a stomach-like organ found in the digestive tracts of chickens and other animals. Since gizzards are constructed from thick, muscular walls, they tend to have a tough texture and bland taste, but are still considered a delicacy in some countries. Their nutritional value is minor at best, though they do contain more protein than other organ meats. 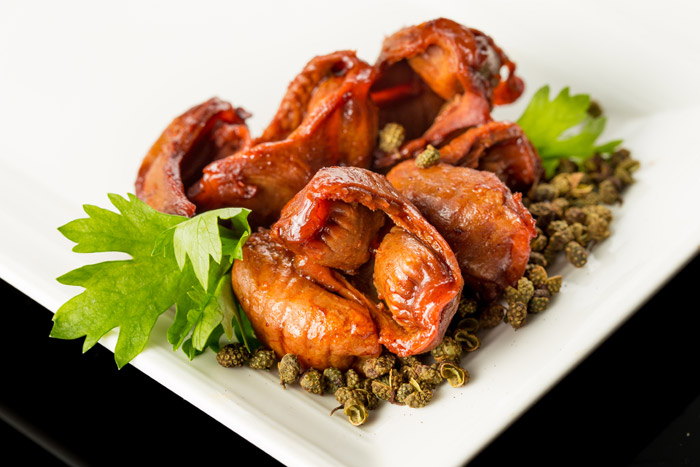 Believe it or not, there is a way to make something called “gizzard” look appetizing (though you might need to be a professional photographer to achieve it)

Sweetbread – Don’t let the name fool you: sweetbread is neither sweet nor a bread. Rather, it is the culinary name for the throat and pancreas of the calf or lamb. Sweetbread’s taste and texture resembles that of brains, as does its significant B12 content. Definitely worth a try!

Organ meats are also fantastic sources of Coenzyme Q10 (CoQ10) and purines. CoQ10 is a potent antioxidant that maintains the normal oxidative state of LDL cholesterol and supports the health of vessel walls. Since the highest concentrations of CoQ10 are found in the heart, it shouldn’t surprise us to learn that hearts are the best sources of it.

Purines, on the other hand, are natural compounds that function as precursors for DNA and RNA, and play an important role in maintaining cellular structure. While high-purine foods can aggravate people with gout (since purines metabolize into uric acid in the body), purines are beneficial for almost everyone else and, in fact, are found in almost all food types on Earth. 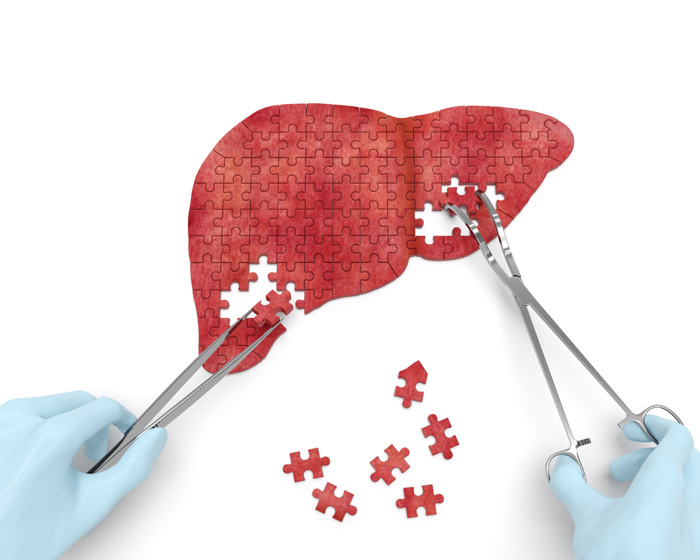 Who knows what other nutrients could be lurking within organ meats?

Organ meats from healthy, pasture-raised animals are some of the most nutrient-dense foods on Earth. All four of the most common organ meats (liver, kidneys, heart and brain) are fantastic sources of brain-boosting B vitamins, especially vitamin B12, and liver remains the undisputed king of vision-boosting preformed vitamin A.

Organ meats are also bursting with protein, selenium, fatty acids and countless other essential and non-essential nutrients… and remember, these are just the nutrients of which we are currently aware. Goodness knows what other health-promoting compounds could be found within these highly complex organs that remain unidentified by science.

As with all animal products, it’s important to source your organ meats from organic-certified farms that allow their animals to roam pastures and enjoy their natural diet. Aside from supporting businesses that actually treat their animals ethically, you’ll also receive a higher-quality product, since pasture-raised animals almost always produce more nutritious meat than their conventionally-raised counterparts.

Want to know if there’s an organic farm near your home? Type “organic farms” and your region name into a search engine and look for the results that provide home deliveries (unless, of course, you’re happy to drive to the farm and collect the produce yourself). Almost all organic farms that sell muscle meats usually sell at least some organ meats, often at low prices due to a lack of demand.

Organ meats should be stored in the coldest part of the fridge. Their shelf life should be listed on the packaging, but it is usually between two and four days. Organ meats can be frozen for future use, but should not be re-frozen once thawed.

Organ meats can be cooked like regular meat (e.g., fried, broiled, etc.). Unlike regular meats, however, most organ meats – especially liver and kidneys – can be unpleasant to eat on their own due to their strong taste. Consequently, organ meats are sometimes added to curries, stir fries or other dishes in an attempt to disguise their flavor.

Here are a handful of ideas to get you started:

Liver and onions – Once a staple in the Western world, chopped liver and onions is one of the simplest and most pleasant ways to consume this strongest-tasting of organs. On a ketogenic diet? Consider adding bacon to the meal for added fat. 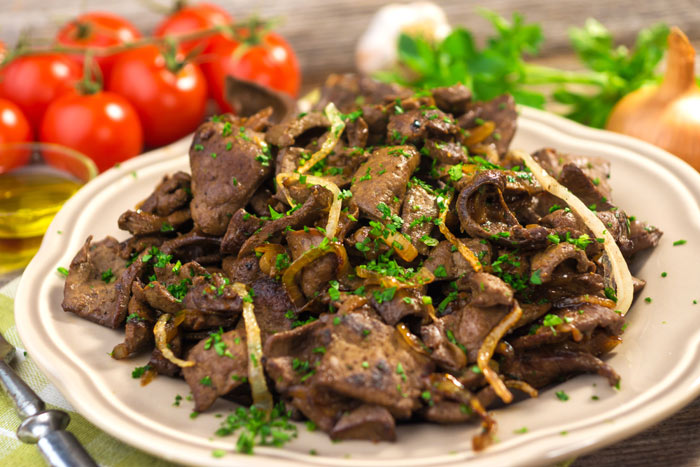 Chili con carne – Due to its spicy taste, chili con carne is a great way to disguise the taste of organ meats, especially the smaller organ meats like kidneys. Simply add the diced organs to the regular meat and serve the meal as normal.
Heart stew – Since heart is a mild-tasting muscle meat, it can substitute almost any regular meat in a meal. Heart stew is a popular meal in the Mediterranean and can be made using cubed heart, tomato paste, bone broth, onions, carrots, celery, garlic, spices and anything else you fancy adding to it.