The Roles of Protein in the Body: Building Cells, Fighting Disease 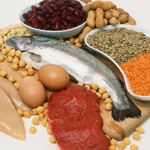 Proteins are large, complex molecules constructed from a set of 20 amino acids, of which eight must be obtained through diet and are not produced naturally by the body. Each protein’s specific function is determined by its amino acid arrangement, and these arrangements can vary considerably.

While most people understand that protein plays a role in the growth and repair of cells, in reality it performs far more functions. This article contains a distillation of protein’s main roles in the body.

What Protein Does for Us

Aids growth and repair of cells – After our body breaks dietary proteins down into amino acids, it uses them to build and repair cells and tissue, including muscle tissue. This is one of the main reasons why nutritionists recommend that bodybuilders eat protein-rich foods such as meat, fish, legumes, and eggs. However, it’s important to remember that protein cannot build muscle by itself; a high protein intake must also be complemented by vigorous exercise for effective muscle growth.

Assists with important biological functions – Our bodies perform thousands of biochemical reactions daily, and all of them require energy. Enzymes are proteins that help to reduce the activation energy of many biochemical reactions, allowing these reactions to occur much faster. One example of an enzyme is lactase, which is needed for the complete digestion of milk.

Supplies energy – If our carbohydrate reserves are depleted, our bodies can utilize proteins as an energy source by reducing them to their basic amino acid structures and then oxidizing them as it would glucose. However, this is a “last resort” way of generating energy; too much protein used in this manner can cause dysfunction.

Sends signals around body – Hormones are proteins that are released by a cell, gland, or organ to send signals to, or co-ordinate actions in, other parts of the body. One example of a hormone is insulin, which regulates fat and carbohydrate metabolism in the body.

Transports substances around body – Some proteins, called transport proteins, carry other proteins around the body. Hemoglobin, for instance, is a protein found in red blood cells that carries oxygen around the body. It also transports carbon dioxide, a waste product, back to the lungs so that the body can excrete it.

Protects against infection – Antibodies are Y-shaped proteins that are used by the immune system to identify and neutralize bacteria and viruses. All antigens (substances that stimulate the production of antibodies) have a specific antibody to immobilize them until our white blood cells can destroy them.

Whole foods are always the best source of protein, especially those that contain all eight essential amino acids (“complete” proteins). Some vegetarian examples of complete proteins include buckwheat, quinoa, amaranth, and chia seeds.