Yogurt: A Great Source of Probiotics, Calcium, and Fat 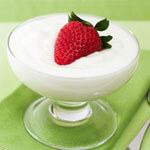 Yogurt is a classic example of a food which, despite being healthiest in its natural state, is constantly being tampered with to suit the misguided dietary wishes of consumers. A cursory glance at the dairy aisle of any supermarket, for instance, will reveal an ever-growing array of yogurt products bearing little to no nutritional merit: fat-free yogurts, yogurts with dead bacterial cultures, yogurts fortified with dangerous ingredients like aspartame… and those are just the regular “white” brands.

However, natural yogurt – yogurt that is unsweetened and unprocessed, and ideally made from organic and/or raw milk – is still relatively easy to obtain in most countries, and its health benefits are considerable.

Rich in probiotics – Since natural yogurt is made through the bacterial fermentation of milk, it contains many beneficial living microorganisms. These microorganisms, which are commonly referred to as probiotics (literally meaning “for life”), greatly benefit our health when consumed in adequate amounts. For example, the bacteria most commonly used in the production of yogurt, Lactobacillus bulgaricus, Lactobacillus acidophilus, and Streptococcus thermophilus, help adjust the microflora (the natural balance of organisms) in our intestines. This, in turn, aids our bodies’ production of vitamin K and vitamin B12, and also ensures that calcium is efficiently absorbed into our bloodstreams, where it can be carried to our bones. When we are deficient in these beneficial cultures our body becomes inefficient at manufacturing numerous essential micronutrients, resulting in potential long-term sickness.

Boosts digestive health – The probiotics found in yogurt also act as a barrier against harmful bacteria by coating our gastrointestinal tracts. This forces the harmful bacteria to compete with the probiotics (often unsuccessfully) for the one thing that all bacteria need to colonize and multiply: living space. Consequently, an intestinal tract that is fortified with probiotics is at a reduced risk of digestion-related conditions such as diarrhea, bloating, gas, irritable bowel syndrome, inflammatory bowel disease, chronic fatigue, and – most of all – constipation. Yes, probiotic-rich foods like yogurt really are effective natural laxatives, so eat more of them if you’re suffering from irregular bowel movements.

A good source of fat – Half of a container (four ounces) of natural yogurt made from whole milk contains approximately four grams of total fat, of which two grams are saturated. One of the essential fatty acids found in this fat, conjugated linoleic acid (CLA), cannot be made by our bodies and needs to be obtained from dietary sources. Studies have shown that CLA is a powerful anti-carcinogen that can help decrease body fat, increase the metabolism, boost immunity, fight inflammation, lower bad cholesterol, and reduce the risk of heart disease. Of course, none of these benefits are available in yogurt that has been stripped of its fat.

High in calcium – Half of a container of natural yogurt also supplies us with approximately 137 milligrams of calcium, or 14 percent of our recommended daily intake. Significantly, yogurt also contains certain short-chain fatty acids (SCFA) that ensure that our colon remains acidic, which is necessary for the efficient assimilation of calcium. Therefore, if you’re suffering from a calcium deficiency, consider eating natural yogurt on a daily basis. Doing so will both provide you with calcium and also improve your body’s absorption rate of calcium from other foods!

Natural yogurt is also a good source of riboflavin, phosphorus, and, of course, the essential “building blocks” of the body, protein. Expect to find at least four grams of complete protein per four ounces of natural yogurt, with Greek yogurt – a thicker type of yogurt that has been strained to remove its whey content – potentially containing more than double this amount.