Spinach: A Great Source of Iron, Vitamin K, and Phytochemicals 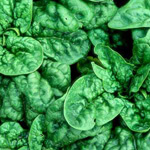 Spinach, in all its varieties, is one of the most nutritious “regular” foods in existence. One only needs to look at its bright, vibrant leaves to understand that this annual flowering plant, which is native to central and southwestern Asia, is brimming with all the essential nutrients that our bodies need for maintenance and growth.

This article takes a closer look at the health benefits of spinach. Most of these benefits relate to cooked spinach, since spinach is a rare example of a vegetable that actually becomes more nutritious when it is boiled or steamed. This is because the cooking process helps break down spinach’s large levels of oxalic acid, a natural acid that is known to hinder the absorption rate of several nutrients present in the vegetable like calcium and iron.

One of the best natural sources of vitamin K – Though it might not contain as much vitamin K as its fellow “supergreen,” kale, spinach still remains one of the world’s greatest sources of this important, blood-boosting nutrient: 889 micrograms, or 1,111 percent of our recommended daily intake (RDI), per cup to be exact. Vitamin K performs a number of important roles in our bodies, such as facilitating cell growth and helping to build bone, but its best-known function is aiding blood clot formation. This is the reason why wine fortified with spinach juice was given to French soldiers in World War I who were suffering from hemorrhages – the vitamin K in the juice helped prevent excessive bleeding.

Rich in cancer-fighting phytochemicals – Spinach contains high concentrations of carotenoids, saponins, and flavanoids, which are phytochemicals that are found almost exclusively in plant-based food sources. According to a May 2007 study published in the Proceedings of the Nutrition Society, phytochemicals aid the “detoxification and enhanced excretion of carcinogens, the suppression of inflammatory processes such as cyclooxygenase-2 expression, inhibition of mitosis and the induction of apoptosis at various stages in the progression and promotion of cancer.” For this reason, the American Institute for Cancer Research includes spinach on its list of the best cancer-fighting foods. It seems to be particularly effective at preventing and fighting ovarian and prostate cancers.

Contains vision-boosting carotenoids – Certain carotenoids found in spinach, such as lutein and zeaxanthin, are macular pigments that are proven to help treat deteriorating eyesight. Research compiled by the Macular Society shows that lutein and zeaxanthin function as antioxidants in the macula, helping to destroy any free radicals in it. Since free radicals are a primary cause of macular degeneration, eating more leafy green vegetables like spinach, which are the best natural sources of carotenoids, will directly benefit our long-term eye health.

A good source of iron – One cup of cooked spinach supplies us with 6.4 milligrams of iron, which is 36 percent of our RDI. An essential macromineral, iron is widely known for its role in hemoglobin formation, but it also helps maintain brain, endocrine, metabolic, and immune function. Iron-rich whole foods like spinach are, of course, much better sources of the mineral than synthetic tablets. The darker the leaves of the spinach plant, the more iron it contains.

Dense in many other nutrients – Aside from the nutrients listed above, cooked spinach is also surprisingly rich in vitamins C and E, folate, calcium, magnesium, potassium, and manganese. Deficiencies in some of these essential minerals, most notably magnesium, are even more common than iron deficiencies. Eating more spinach and other leafy green vegetables like kale and broccoli, though, can correct many of the deficiencies that can compromise our standard of living.