Study Finds That Moringa Oleifera Is a Potent Anti-Inflammatory 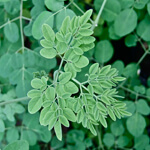 Moringa oleifera, also called the drumstick tree and the horseradish tree, is a drought-resistant tree that grows in the foothills of the Himalayan mountains in northern India. It is also cultivated throughout Africa and Central and South America, where it is treasured for its significant medicinal value. In fact, moringa is nicknamed “The Tree of Immortality” and “The Miracle Tree” in its native lands due to its remarkable healing properties and its ability to grow in the harshest of conditions.

Though research into Moringa oleifera is limited due to its relative obscurity in the West, more and more studies are emerging which confirm that this beautiful tree deserves its long-standing reputation as a healer. One of these studies, undertaken by French researchers and published in Dakar Med, has found that moringa roots contain impressive anti-inflammatory properties and could help treat acute inflammatory conditions such as bronchitis and rheumatoid arthritis.

For the study, the researchers administered either distilled water (the control group), 10 mg/kg of indomethacin (an anti-inflammatory drug), or a root extract of Moringa oleifera (750 mg/kg or 1000 mg/kg) to a group of rats. 30 minutes later, the paws of each rat were subjected to edema induced by an injection of carrageenin.

Moringa Can Treat Many Conditions

Though this study into Moringa oleifera‘s anti-inflammatory benefits is promising, this tree is packed with so much nutrition that it could probably help treat anything. Analysis reveals that moringa leaves contain 90 different nutrients, including 36 times more magnesium than eggs, 50 times more vitamin B3 than peanuts, 25 times more iron than spinach, and 4 times more calcium than milk. Moringa leaves are also a “complete” protein source and contain at least 46 essential antioxidants, including 272 percent of our recommended daily intake of vitamin A. No wonder ancient healing systems such as the Ayurveda claim that moringa can treat over 300 diseases, including diabetes and cancer.