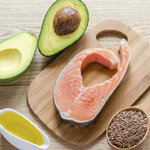 Low carb diets, including the ketogenic diet, have been controversial for decades. The belief that fats are bad while carbohydrates are good, which has its origins in scientifically questionable studies from the 1950s, still assumes a strong hold over public consciousness.

However, the tides are gradually turning, and more researchers are beginning to question the 20th century’s incessant demonization of fats. In fact, since 2002 there have been over 20 studies conducted on low carb diets, and the overwhelming majority of them clearly show that the health benefits of a low carb diet considerably exceed those of a low fat diet – especially when it comes to weight loss and cardiovascular health.

Studies show that individuals who significantly reduce their carbohydrate intake tend to lose more weight, and at greater speed, than those on low fat diets. For example, a study published in The New England Journal of Medicine found that obese subjects that suffered from a high prevalence of diabetes or a metabolic syndrome lost more weight on a six month low carb diet than on a calorie- and fat-restrictive diet. Another study, published in The Journal of Pediatrics, produced similar results. “The [low carb] diet appears to be an effective method for short-term weight loss in overweight adolescents and does not harm the lipid profile,” concluded the authors.

Perhaps the biggest reason why low carb diets are so effective at triggering weight loss is that fat is naturally satiating and can lead to an automatic reduction in appetite. Carbohydrates, on the other hand, tend to have high glycemic loads and can wreak havoc with our blood sugar levels, resulting in greater hunger and thus, by extension, greater calorie intake.

A growing number of studies also show that low carb diets have impressive benefits for our cardiovascular health. One study published in The Journal of Nutrition, for instance, showed that carbohydrate restriction could decrease the risk for atherosclerosis and coronary heart disease in adult men. Additionally, a study published in The New England Journal of Medicine found that subjects on a low carb diet experienced increased HDL cholesterol levels, and decreased triglyceride concentrations, when compared to subjects on a conventional diet. Low carb diets have even been found to reduce blood sugar and insulin levels.

Since heart disease is responsible for 1 out of 4 deaths in the United States, it’s important that we adhere to a diet that minimizes our risk of this widespread medical condition. Ongoing research suggests that a low carb or ketogenic diet, coupled with regular exercise, is one the best ways to achieve this important goal.

A lot of people are initially hesitant to follow a low carb diet, since they assume that it is too restrictive. In reality, however, a large number of foods are allowed on the diet, including fish and seafood, meat, eggs, vegetables, nuts, seeds, high-fat dairy, healthy oils, fats, and, on occasion, even tubers. On the other hand, we avoid sugar, wheat and other grains, seed oils, trans fats, artificial sweeteners, and all processed foods. This is a diet that comes much more naturally to us than the Standard American Diet, in which carbs and processed foods reign supreme, and will benefit most of us in the long run.