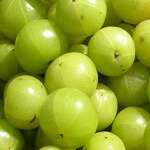 The Indian gooseberry, also known by the Hindi name amla, is a deciduous tree that is native to Asia. It is well-known for bearing edible fruits of the same name, which are characterized by their light green color and extremely sour, astringent taste. Indian gooseberries have been used in Ayurvedic medicine for centuries to treat numerous ailments, including diabetes, although they are better-known in the West for their impressive antioxidant activity.

Rich in antioxidants – Perhaps the Indian gooseberry’s most famous benefit is its exceptional levels of antioxidants. According to a 2009 study into its nutritional composition, the gooseberry contains a vast number of antioxidants, including phenols, flavonoids, and tannins, as well as vitamin C. In fact, the average gooseberry contains 3,000 milligrams of vitamin C, a concentration that is 20 times greater than that of an orange. Like all antioxidants, vitamin C scavenges free radicals, thereby protecting us from degenerative diseases (including numerous cancers) while providing anti-aging benefits.

Lowers blood cholesterol – According to a study published in a 2008 edition of the Indian Journal of Clinical Biochemistry, Indian gooseberries can improve cardiovascular health by reducing blood cholesterol. For the study, volunteers were given ‘Amlamax’ tablets (a powdered concentration of the fruit) for a six-month period. The researchers found that all volunteers experienced a reduction in “bad” LDL cholesterol and triglycerides, and a considerable increase in ‘good’ HDL cholesterol. This is possibly due to the fruits’ pectin content, which is known to inhibit platelet aggregation and reduce total cholesterol in humans.

Improves gastrointestinal health – Indian gooseberries are highly fibrous, and the average berry is comprised of 80 percent water. Thus, like most fruits, they are effective natural laxatives that help to sweep the intestinal tract of accumulated matter, thereby relieving constipation, irritable bowel syndrome, and other gastrointestinal conditions. Fiber also binds toxins, including cancer-causing toxins found in the colon, thereby guarding us from colon cancer.

Treats diabetes – According to a study published in a 2005 edition of the Journal of Medicinal Food, Indian gooseberries can improve the glucose metabolism of diabetics and inhibit the production of glycosylated hemoglobin (hemoglobin molecules that have bound to glucose). The author of the study, T. P. Rao, attributes these benefits to the fruits’ antioxidant activity.

Cosmetic benefits – Due to their antioxidant and trace mineral content, Indian gooseberries can benefit your skin and hair if applied topically as a paste. If you are experiencing hair loss, for instance, then rubbing the paste on your scalp will nourish the roots, encouraging hair regrowth and improved color. Likewise, dry and brittle skin can be invigorated anew if treated with crushed Indian gooseberry paste (especially if mixed with other skin-friendly ingredients like honey or blackstrap molasses).