Ginger: The Perfect Herb for the Stomach 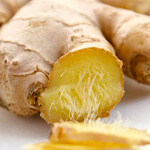 Few herbs have received as much praise throughout history as ginger, the rhizome of the Zingiber officinale plant. Testimonials of ginger’s significant medicinal properties have been recorded as far back as ancient Greece, though it was also mentioned in the ancient literature of Europe, Asia, and the Middle East. The ancient healing systems of China and India particularly venerated ginger, and often prescribed it to treat fatigue, poor blood circulation, and nausea.

Ginger remains the world’s most widely cultivated herb, and a large number of studies confirm its numerous health benefits. Like most herbs, almost all of these benefits stem from ginger’s many bioactive compounds; it contains few vitamins or minerals in significant amounts.

Treatment for gastrointestinal complaints – Ginger has been used for centuries as a home remedy for constipation, bloating, gastritis, gastric ulcerations, indigestion, morning sickness, and countless other gastrointestinal issues. A study published in the European Journal of Gastroenterology and Hepatology also found that ginger could help the muscles of the stomach contract, thereby boosting digestion. According to a review published in Food & Function, ginger is effective at treating gastrointestinal conditions due to its high concentrations of antioxidants, whose free radical-scavenging abilities bestow the herb with gastroprotective effects.

Rich in anti-inflammatory gingerols – Ginger is rich in bioactive, anti-inflammatory compounds called gingerols and shogaols. These substances are believed to be the reason why so many people with rheumatoid arthritis or osteoarthritis experience reductions in pain and improvements in movement after consuming ginger on a regular basis. For example, a study published in the Journal of Natural Products found that crude ginger extracts and gingerol derivatives could prevent joint inflammation. A later study, published in Phytotherapy Research, discovered that ginger could alleviate neuropathic pain in rats.

Boosts immune function – Ginger is a proven diaphoretic, meaning it can increase perspiration. Though most of us are aware that sweating can detoxify our bodies, German researchers have recently discovered that sweat contains a natural antibiotic named dermcidin that can ward off bacterial, fungal, viral, and microbial infections. For this reason, eating more ginger can directly boost our body’s immune system and protect us from common infections such as Staphylococcus aureus (a common cause of skin conditions) and Candida albicans.

Natural aphrodisiac and antidepressant – According to a study published in the African Journal of Biomedical Research, ginger extracts have a positive effect on the reproductive functions of male rats due to its “potent antioxidant properties and androgenic activities.” These results confirm the allegations of ancient Chinese and Indian medicine, which claimed for centuries that ginger is a potent aphrodisiac. Moreover, the aforementioned gingerols in ginger are known to possess sedative properties, which might help explain why ginger is also an effective antidepressant that can improve low moods.

While ginger root can be eaten raw, it is far more pleasant to consume in tea or powdered form. Ginger tea is an especially popular way to consume ginger and is probably the most accessible way to treat a persistent stomach complaint. Some people like to add honey or lemon to the tea to boost its stomach-settling qualities.