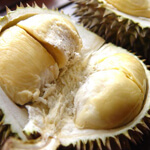 The durian (Durio zibenthinus) is a large, round, thorn-covered fruit that is native to southeast Asia. Known in the West for over 600 years, durians are characterized by their extremely pungent and unpleasant smell, which is often described as resembling rotten meat or sour milk (and those are just the polite descriptions). Despite their external unpleasantness, however, durians are extremely nutritious fruits. In fact, their nutritiousness is such that southeast Asians regard them as the “King of Fruits.”

Good source of vitamin C – One cup of fresh durian (almost half a whole fruit) contains an impressive 47.9 milligrams of vitamin C, which is approximately 80 percent of our recommended daily intake. Aside from being an important antioxidant that guards us from degenerative diseases like cancer and Alzheimer’s disease, vitamin C is also the key to the production of collagen, a protein that aids the growth of cells and blood vessels and which gives skin its strength and firmness. For this reason, vitamin C-rich fruits like durian also possess considerable anti-aging benefits.

Natural aphrodisiac – Javanese culture has long considered durians to be potent aphrodisiacs, and emerging scientific research is starting to confirm these allegations. According to a 2009 study published in the Journal of Pharmacy Research, for example, mice that were fed durian extracts over an extended period experienced improved libido, and a higher sperm count, than the control group. The researchers attributed these benefits to the durian’s large concentrations of glycoside, saponins, flavanoids, and sterols, which are important phytonutrients that increase androgen levels in humans and animals.

High in beneficial fats – Like avocados and coconuts, durians belong to that rare group of fruits that contain large amounts of fat and calories. Specifically, one cup of durian contains 13 grams of fat (20 percent of our RDI) and a whopping 357 calories. Sadly, these facts often discourage people from eating or even trying durians since they believe they will cause weight gain and high cholesterol. In reality, however, the fats found in durians are the heart-boosting monosaturated kind that lower “bad” LDL cholesterol, and – as with other calorific fruits – weight gain is usually caused by excessive consumption of them (eating a whole durian in one sitting, for instance, probably isn’t a good idea).

Analgesic and antibiotic properties – Though most of the durian’s health benefits lie in its flesh, studies have shown that its shell also contains healing properties when processed into an extract. For example, a 2010 study published in the Journal of Southern Medical University demonstrated that durian shell extracts could relieve coughing in mice. The extract also exhibited pain-killing and antibiotic properties, suggesting that durian extracts could make an excellent natural alternative to related allopathic drugs like Paracetamol and Amoxicillin.

Bursting with nutrients – Durians are an excellent source of B vitamins, and are especially high in thiamin and vitamin B6. Additionally, one cup of durian contains varying amounts of iron, magnesium, phosphorus, potassium, zinc, copper, and manganese, as well as 7 percent of our RDI of protein and 37 percent of our RDI of dietary fiber.

Unfortunately, durians are difficult to obtain outside of their native territories for reasonable prices. Moreover, they are a classic example of a fruit that needs to be checked for ripeness before purchase (ripe durians have a strong smell, unripe ones have a “raw” smell). In the United States, your best bet is to find an Asian supermarket that is daring enough to sell them. This might not be easy, but you’ll be rewarded with an exotic superfruit that truly lives up to its royal title.