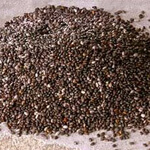 Chia is a species of flowering plant that bears oval-shaped, multicolored seeds. These seeds, which have a neutral taste and crunchy texture, have been cultivated for centuries as a survival food in their native Mexico and Guatemala. Chia seeds had only just begun to enjoy recognition in the United States, however, when the eccentric Californian gadget company, Joseph Enterprises, began to market them in the 1980s as “Chia Pets,” which are terracotta figurines that sprouted chia.

Aztec warriors treasured chia seeds for their medicinal properties, and many of these alleged properties are now being confirmed by contemporary studies. Below is a list of the health benefits attributed to chia seeds and the research that reinforces them.

Rich in essential fatty acids – One serving (two ounces) of chia seeds contains approximately 11 grams of fat. Of these, one gram is saturated fat, while the remainder is comprised of essential polyunsaturated and monounsaturated fats, including omega-3 and omega-6 fatty acids. In fact, according to a 2005 study published in Nutrition Research, chia seeds are the greatest plant-based sources of alpha-linolenic acid (ALA). ALA is an essential omega-3 fatty acid that has been known to prevent cancer, lower the risk of cardiovascular diseases, reduce cortisol levels, and more. Moreover, chia seeds and other foods that contain optimum omega-3/omega-6 balances are known to improve brain function, since our brains are built from the same fats.

Excellent source of protein and energy – According to chia expert Dr. Wayne Coates, chia seeds are comprised of at least 20 percent protein. This protein is high-quality; the amino acid score for chia seeds is 91 out of a possible 100, which dwarfs the scores of other protein-packed seeds such as flaxseeds. This near-perfect amino acid profile makes chia seeds an excellent complete protein source for vegetarians, as well as a potent energy source for bodybuilders and athletes. In fact, according to The Magic of Chia author James Scheer, chia was once called the “Indian Running Food” due to its significant energy-boosting properties.

Help treat diabetes – Several studies have confirmed the long-held belief that chia seeds can help treat diabetes. One January 2009 study published in the British Journal of Nutrition, for instance, found that chia could normalize insulin resistance in diabetic rats while reducing the fat and cholesterol in their blood. These findings reinforce the results of an earlier 2007 study for the Diabetes Care journal, which concluded that chia improved “major and emerging cardiovascular risk factors in type 2 diabetes” in 20 patients.

These impressive results are often attributed to the fact that chia seeds form a gel when ingested, which slows the breakdown of carbohydrates, allowing the digestive system to process sugar in a more gradual and stable manner.

Chia seeds are easy to find online and in health food stores, and they boast a long shelf life. Though they are usually eaten “as is,” often as a snack in-between meals, some people like to add them to their morning smoothies or breakfast cereals.