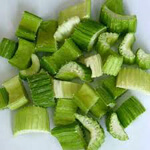 Celery has long been associated with good health. The stalks of this aromatic plant, which is believed to have originated from the Mediterranean basin, has been used worldwide to treat countless medical issues ranging from mild constipation to serious inflammatory diseases. Today, over one billion pounds of celery are produced annually in the United States alone, with Michigan, Florida, and California accounting for 80 percent of all celery production.

Despite its popularity, many people assume that celery isn’t especially nutritious due to its lightweight, watery nature. While it is true that celery does contain few essential vitamins and minerals compared to heavier foods, it is rich in certain phytonutrients that provide some truly special health benefits.

Cancer-fighting properties – Celery contains two flavones, apigenin and luteolin, that are proven to help treat various types of cancer. For example, a study published in Tumour Biology in August 2014 found that apigenin can induce apoptosis in human gastric carcinoma cells in a dose-dependent manner. Another study, published two months later in Experimental and Molecular Pathology, discovered that “low-dose apigenin has the potential to slow or prevent breast cancer progression.”

Luteolin, on the other hand, seems to specialize in treating colon cancer. A review published in the Asian Pacific Journal of Cancer Prevention in 2014, for instance, concluded that luteolin could reduce oxidative stress during colon cancer genesis, and could be “considered as a potential drug to treat [colorectal cancer].”

Improves blood health – One of the chemical constituents of celery oil is 3-n-butylphthalide (BuPh), which, aside from being responsible for celery’s unique taste and aroma, is shown to help treat high blood pressure. For example, research published in Phytotherapy Research in December 1998 showed that BuPh has a vasorelaxant effect on hypertensive rats (i.e. it reduced tension in their blood vessel walls), thus lowering their blood pressure.

One cup of chopped celery also supplies our bodies with 37 percent of our daily value of vitamin K, a group of fat-soluble compounds that helps our blood clot properly. In fact, the “K” actually stands for koagulation, the German word for “clotting.” Deficiencies in vitamin K can increase the risk of uncontrolled bleeding, easy bruising, and – due to vitamin K’s additional role in bone building – a weakening of the bones.

Weight loss aid – There are many good reasons why eating celery can help us lose weight. Firstly, it is fat-free and only contains around 16 calories per cup (celery is actually a “negative calorie” food, since our bodies require more calories to digest it than the plant itself contains). Secondly, it is comprised of approximately 95 percent water, which helps to remove waste from our cells and reduce fatigue. Lastly, celery is rich in soluble fiber, which helps balance blood sugar levels and lower LDL cholesterol.

When possible, favor organic celery that snaps easily when pulled apart. The leaves should be a healthy pale to bright green color and free from yellow or brown patches.

Celery is best consumed raw and in whole form. While celery juice does have its benefits, juicing damages the plant’s fiber profile which, in turn, decreases its efficacy as a constipation and weight loss aid.