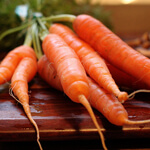 The carrot is a biennial plant that is native to Europe and southwestern Asia, but has been cultivated worldwide for over 2,000 years. It bears a crunchy taproot that is usually orange in color but can also be purple, red, white, or yellow. These taproots are commonly incorporated into salads, cooked meals, and even beverages.

Carrots have long been associated with good health, and their deep, vivid hues are a testament to their impressive concentrations of antioxidants. In fact, the Ancient Greeks regarded the carrot as a medicine rather than a food, and modern research is beginning to understand why.

Rich in vision-boosting vitamin A – One medium-sized carrot contains 7,836 international units of vitamin A, or 157 percent of our recommended daily intake. This vitamin A is derived from the carrot’s high concentrations of carotenoids, notably beta-carotene (beta-carotene was actually named after carrots). Vitamin A is an essential antioxidant that facilitates gene transcription, strengthens the immune system and, most of all, maintains vision. Yes, carrots really are good for our eyesight because plant-based vitamin A includes the organic compound retinol, which helps to generate nerve impulses in our retinas. Carrots are also rich in lutein and zeaxanthin, the only two carotenoids that are deposited in high quantities in the retina. Eating foods rich in these natural pigments helps protect the retinol tissue and also scavenges free radicals which, if left unchecked, can contribute to macular degeneration.

Prevent cognitive decline – A randomized trial published in the Archives of Internal Medicine in November 2007 found that male participants whose diets were supplemented with beta-carotene over an extended period demonstrated significant improvements in verbal memory, category fluency, and general cognition compared to the control group. The scientists believe that this result is because the beta-carotene, which is a potent natural antioxidant, can eliminate the oxidative stress that contributes to brain aging. Therefore, those of us concerned with age-related mental deterioration can certainly benefit from adding more beta-carotene-rich foods such as carrots to our diets. Don’t go overboard, though; excess consumption of these foods can lead to carotenemia, a (harmless and easily-reversible) condition in which your skin turns yellow or orange!

Natural treatment for leukemia – According to a 2012 study published in Anti-Cancer Agents in Medicinal Chemistry, three bioactive compounds found in carrots and carrot juice, namely falcarinol, falcarindiol, and falcarindiol-3-acetate, can induce apoptosis (cell death) on human lymphoid leukemia cell lines. Interestingly, the two carotenoids also tested (beta-carotene and lutein) didn’t demonstrate the same benefit. “This suggests that polyacetylenes rather than beta-carotene or lutein are the bioactive components [that] could be useful in the development of new leukemic therapies,” the scientists reported.

Guard us from heart disease – A comprehensive 10-year study from the Netherlands found that colorful, antioxidant-rich fruits and vegetables are effective at treating cardiovascular disease (CVD), which remains America’s number one “silent” killer. The participants who ate carrots exhibited a 32 percent decrease in CVD, the biggest decrease of all of the foods tested. The researchers also found that foods that were deep orange or yellow proved to be the most protective against CVD, besting those that were green, purple, red, or white. Their research was featured in The British Journal of Nutrition in November 2011.

Weight loss properties – Like most vegetables, carrots are high in fiber, virtually fat-free, low in calories, and low on the glycemic index, which makes them a great food for people looking to lose weight or detox from processed meals. Though not a great source of regular nutrients (excluding vitamin A), carrots do contain small amounts of vitamins C, E, and K, as well as minerals such as potassium and manganese.