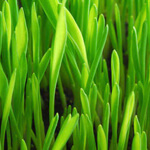 Barley is a major grain that was one of the first cultivated grains, and remains the fourth most cultivated cereal grain in the world. Matured barley is commonly used in beer production, and as animal feed. Young barley shoots, however, are consumed almost exclusively as a health food, and for good reason: research suggests that these gluten-free shoots, which are called barley grass and typically consumed in juiced for powdered form, contain a huge number of nutrients that are lost when they enter the reproductive cycle.

Rich in chlorophyll – Like wheatgrass, another supergreen to which barley grass is often compared, barley grass is one of the world’s finest sources of chlorophyll. Chlorophyll is a potent blood cleanser and builder, and helps to increase our hemoglobin levels to that our red blood cells can provide our cells with more oxygen. Since destructive bacteria cannot thrive in the presence of oxygen, eating more chlorophyll-rich foods like barley grass can shield us from disease. Moreover, barley grass contains a large number of antioxidants (including the extremely potent antioxidant, superoxide dismutase), which compound its disease-fighting properties.

Digestive benefits – Barley grass contains a large number of important digestive enzymes, including cytochrome oxidase, lipase, protease, and amylase. According to Dr. Gillian McKeith, author of the book 12 Natural Superfoods to Transform Your Health, these enzymes are the reason why consumption of barley grass has been shown to aid celiac disease, indigestion, Crohn’s disease, gastroesophageal reflux disease (GERD), and a host of other digestion-related issues. Additionally, barley grass is comprised of approximately six percent dietary fiber, which flushes the colon of toxins and creates an environment that discourages disease.

Dense in nutrients – Perhaps barley grass’s biggest appeal is its remarkable concentration of nutrients, which far exceeds those of synthetic vitamin and mineral supplements. Spectral analysis shows that barley grass contains all the vitamins apart from vitamin D, and is particularly high in vitamin C and vitamin A (it even contains small amounts of B12). Barley grass also boasts a large number of minerals, including calcium, copper, iron, magnesium, potassium, phosphorus, zinc, and even chromium. Lastly, barley grass is comprised of approximately 45 percent protein, which is twice as much as wheat germ. This protein is extremely high-quality and contains all eight essential amino acids, which is why so many bodybuilders (especially vegetarian or gluten-free bodybuilders) add barley grass powder to their post-workout smoothies.