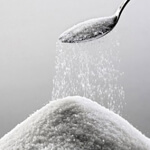 As word continues to spread about the damaging health effects of refined sugar, the number of commercially available sugar alternatives has also increased. Unfortunately, many sugar alternatives can be just as undesirable as sugar itself. Saccharin and acesulfame K, for example, are unnatural products whose long-term effects on the human body remain unknown. High fructose agave syrup is proven to cause havoc with our blood sugar levels. And aspartame, of course, needs no introduction.

One sugar alternative that is proven to be healthy, however, is erythritol. Though it might sound like something synthesized in a Big Pharma lab for diabolical purposes, erythritol is actually a natural sugar alcohol found in many whole foods – and its taste closely resembles that of sugar.

Since humans lack the enzymes required to break it down, erythritol does not affect our triglycerides, cholesterol, or other metabolic biomarkers. Consequently, its effect on our blood sugar levels – one of the biggest concerns people have regarding sweeteners – is non-existent. This has been confirmed by a study published in the European Journal of Clinical Nutrition, which found that erythritol “did not affect serum levels of glucose, insulin or other serum constituents.”

Erythritol’s benign effects on our blood sugar is great news for people seeking to lose weight, since blood sugar spikes prompt the pancreas to produce more insulin, the hormone responsible for fat storage. Additionally, even though erythritol contains 70 percent of the sweetness of sugar, it only contains 6 percent of its calories.

Although there are countless reasons to give up refined sugar, its negative effect on our teeth is one of the biggest. Yes, sugar really does feed the destructive bacteria in our mouths that is responsible for enamel erosion, and substituting it with a sugar-free sweetener can be an important first step towards improved oral health.

However, erythritol doesn’t simply leave our teeth unaffected – it can actively improve them. For example, a study published in the journal Caries Research found that erythritol (along with xylitol, another sugar alcohol) “significantly reduced” the amount of dental plaque in teenage subjects when compared to the control group. The researchers also noted than erythritol and xylitol (but especially the former) inhibited the growth of certain strains of Mutans streptococci, which is one of the biggest initiators of dental caries.

Erythritol Is Safe in High Doses

One of the biggest benefits of erythritol compared to most other sugar alternatives is that it’s simply safe to consume for almost everyone, even in high doses. A review featured in the journal Food and Chemical Toxicology, for instance, concluded that erythritol is well-tolerated by humans and animals. Another review published in Regulatory Toxicology and Pharmacology found that large doses of erythritol (one gram per kilogram of body weight daily) were also tolerated well by the subjects. Most of the erythritol was excreted harmlessly through the urinary tract, and no digestion problems occurred.