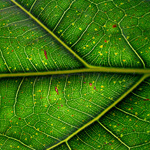 Chlorophyll is the green pigment in plants responsible for absorbing the light necessary for photosynthesis. It is often considered to be the “blood” of plants, since it comprises the basic physiology of the plant and is required for their basic metabolic functions, such as growth and respiration. While most land plants contain chlorophyll to some degree, those with the deepest green colors contain the greatest concentrations of it.

Though humans cannot photosynthesize and therefore cannot use chlorophyll in the same manner that plants do, studies show that chlorophyll is still a powerful phytonutrient that can benefit our health when consumed in whole food or supplement form.

Protects against disease – Chlorophyll is a potent antioxidant, and emerging evidence suggests that it can help shield us from serious medical conditions. For example, a study published in the journal Food & Nutrition Sciences in 2013 discovered that chlorophyll (along with pheophytin, a chlorophyll molecule lacking a central magnesium ion) could “prevent oxidative DNA damage and lipid peroxidation” in a dose-dependent manner.

Chelates heavy metals – It’s not a coincidence that many foods that chelate heavy metals from the body, such as cilantro and chlorella, also happen to be packed with chlorophyll. According to research published in the Global Advanced Research Journal of Environmental Science and Toxicology, chlorophyll has a porphyrin ring that functions as a natural chelating agent. Additionally, “[t]he middle of chlorophyll is magnesium,” writes the authors, “which is freed under acidic conditions, allowing other heavy metals to bind in its place.” For this reason, adding more chlorophyll-rich foods to our diets is a great way to prevent heavy metal toxicity, which is a big problem in today’s polluted world.

Other health benefits associated with chlorophyll include improved body odor, treatment for anti-inflammatory conditions and, due to its magnesium content, relief from nervousness and high blood pressure.

The Best Sources of Chlorophyll

As a general rule, the greener the plant, the more chlorophyll it contains. Therefore, deep green herbs and vegetables, such as kale, parsley, cilantro, spinach, chard, and broccoli, are some of the best dietary sources of chlorophyll. Algae, such as spirulina and chlorella, and sea vegetables, such as kelp and nori, are also rich in it. Arguably the greatest source of all, however, is wheatgrass juice, which is comprised of approximately 70 percent chlorophyll – as well as a huge number of other health-boosting phytonutrients.