Grass-Fed Lamb: A Great Source of B12, Protein and CLA

The lovable and mild-mannered sheep, first domesticated approximately 10,000 years ago in Central Asia, has a long and rich relationship with mankind. Indeed, sheep have been credited with making the spread of civilization possible. Wool, for example, was the first commodity of value to merit international trade. The Italian explorer, Christopher Columbus, stocked his ship with sheep for use as a “walking food supply” during his second voyage to the New World.

Even the mythologies and religious doctrines of the world are united in their love of sheep. The King James Bible, for instance, references sheep no less than 200 times – far more than any other animal.

Today, over a billion sheep exist in the world. Some countries, such as Australia, Mongolia and New Zealand, actually have three times as many sheep as people. I’m not entirely sure if that’s something to be proud of, but it’s an interesting fact nonetheless. 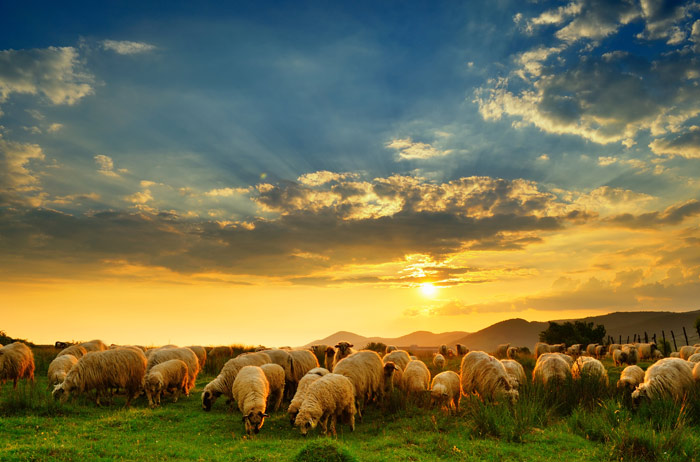 If you guessed New Zealand, you were right

Most of these sheep are, of course, raised for their nutritious meat. The meat of the lamb (a young sheep under 12 months old) is particularly nutritious, especially if the animal was raised on a natural, grass-based diet.

Why Is Lamb Good for You?

According to Self’s NutritionData, 100 grams of ground lamb is:


An excellent source of protein, niacin, vitamin B12, zinc and selenium
A good source of iron, riboflavin, phosphorus and potassium
A minor source of vitamin K, thiamin, folate, pantothenic acid, vitamin B6, magnesium and copper

Boasting a well-rounded nutritional profile that supplies us with many essential minerals, lamb is one of the healthiest meats in the Standard American Diet. Aside from being a particularly good source of cell-building protein and disease-fighting selenium, lamb is an exceptional B vitamin complex, making it a significant brain food.

On the negative side, lamb is lacking in the vitamin department (with the honorable exception of vitamin K). The organ meats of the animal are packed with essential vitamins, however, so don’t just stick to the muscle meat! 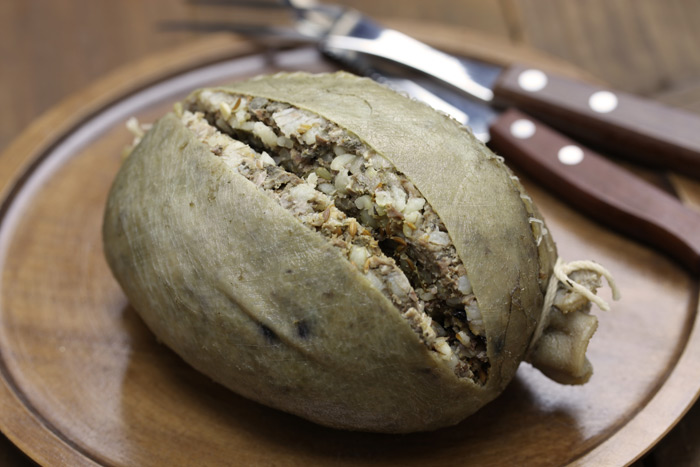 Haggis: one of the most creative ways to consume the organs of sheep

Research into the Health Benefits of Lamb

Like beef, lamb is a good source of conjugated linoleic acid (CLA), an important fatty acid associated with some seriously impressive health benefits. For example, research published in the journal Nutrition in 2012 found that overweight and obese Chinese volunteers who took CLA supplementation for 12 weeks experienced lower obesity indices (including a decrease in hip-to-waist ration and overall BMI) (1).

An earlier study, featured in The Journal of Nutrition in 2000, reached a similar conclusion: Obese and overweight volunteers who took CLA supplementation for 12 weeks experienced a “significantly higher reduction” in body fat mass (BFM) when compared to the control group (2).

A huge number of studies (seriously, a lot) also found that conjugated linoleic acid is a superb cancer fighter. Research published in the journal Chemistry and Physics of Lipids in 2013, for instance, demonstrated that CLA induced cell death in endometrial (womb) cancer cells, and “may be potential agents for the treatment of endometrial cancer” (3).

Moreover, a study published in the journal Chemico-Biological Interactions in 2010 showed that CLA could inhibit the growth of human breast cancer cells (breast cancer remains the most common cancer among American women) (4). 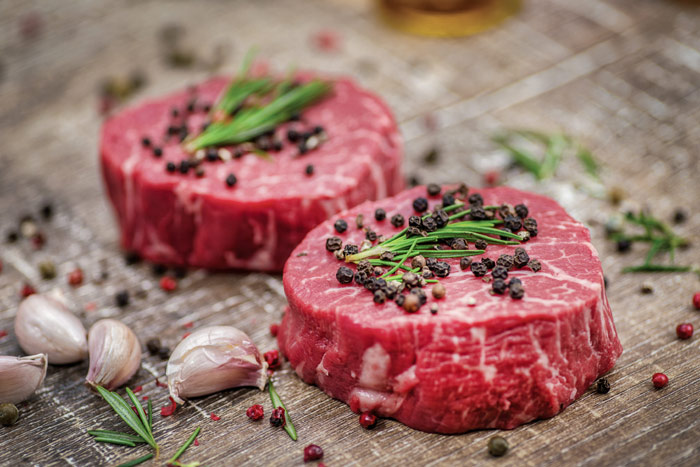 We were told that red meat causes cancer for decades. Surprise, surprise… it was nonsense

Since conjugated linoleic acid is proven to possess weight loss and anti-cancer properties, you might be shocked to learn that it belongs to the most hated of fat groups – the trans fatty acid. Don’t be too alarmed, though. There is a world of difference between natural trans fats found in whole foods, such as lamb, and artificial trans fats found in [insert any food that is swimming in industrial vegetable oil here]. While the latter can contribute to weight gain and disease, the former appear to promote the exact opposite!

This is great news, since while the optimum omega-3/omega-6 ratio is agreed to be around 1:4, followers of the Standard American Diet are likely to have ratios closer to 1:16 in favor of omega-6 fatty acids – an imbalance that is largely blamed on the advent of processed seed oils, and which can contribute to inflammation. Therefore, whole foods with a natural omega fatty acid balance, such as grass-fed lamb, are exactly what we need to help correct this worrying trend.

One of the Best Natural Sources of Vitamin B12

In other words, lamb is the B12 King (which, come to think of it, is a good name for a rapper). 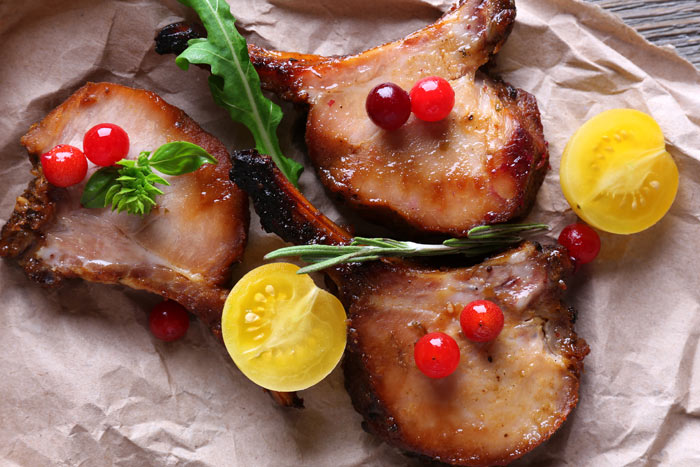 Vitamin B12 is one of those nutrients that everyone knows is good for us, but don’t really understand what it does. So, to put it simply, B12 is a water-soluble vitamin that:

Aids cell reproduction and constant renewal of the skin, making it essential for healthy hair, nails and (you guessed it) skin.
Helps regulate the nervous system, thus reducing stress, brain shrinkage and depression.
Helps our bodies to convert carbohydrates into glucose, thus improving energy production.
Maintains the health of the digestive system (including helping to stabilize our cholesterol and blood pressure levels).

Though most people get enough B12, since our livers can store reserves of it for years at a time, deficiencies can occur in pregnant and breast-feeding women, heavy smokers and drinkers, and strict vegetarians and vegans (natural B12 is found almost exclusively in animal products).

Deficiencies in vitamin B12 are often characterized by chronic fatigue, anemia, vision problems, low moods and a host of other wide-ranging issues. Therefore, it’s important that we get enough B12 in our diets… and few foods are richer in it than grass-fed lamb.

100 grams of ground lamb also supplies us with approximately 49% of our DV of protein, which is more protein than 100 grams of beef (39%), but slightly less protein than 100 grams of pork (52%) or chicken (58%). Like the protein in these other meats, lamb protein contains all 9 essential amino acids (substances that our bodies cannot manufacture themselves and need to be obtained from food sources), making it a complete protein. 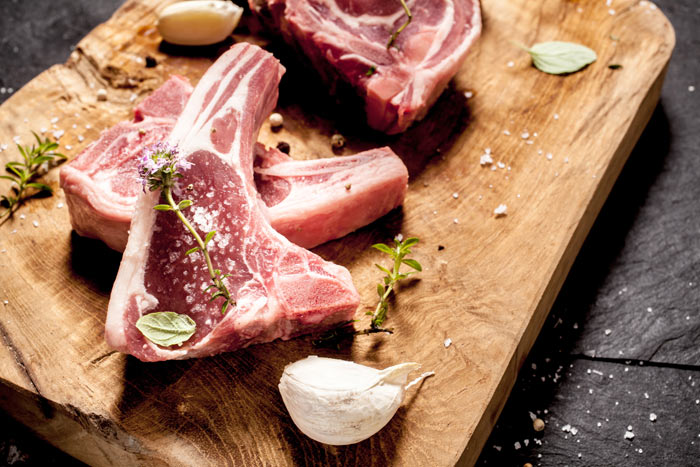 The protein in lamb is complete and easy to digest

While most of us know that protein aids in the growth and repair of cells, it also serves numerous other biological functions. These include transporting nutrients around our bodies (hemoglobin, for example, is actually a protein), maintaining the pH balance of our blood, and serving the immune system (antibodies, for instance, are Y-shaped proteins that seek out and attack viruses and hostile bacteria).

Indeed, there is protein in every single cell we possess, and our bodies would fall apart without it.

Lastly, no article about the health benefits of lamb is complete without highlighting some of the lesser-known (but hugely beneficial) bioactive compounds present within it, namely, creatine, glutathione and taurine. All three of these compounds are proven antioxidants, and have performed some amazing healing acts when placed under the microscope – particularly when faced with cancer and neurodegeneration. 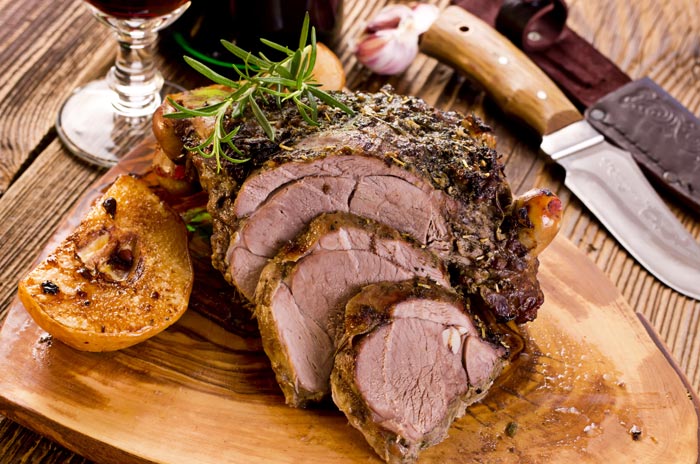 Glutathione supplementation improved lipid metabolism and acidification in the skeletal muscles of mice during exercise, resulting in decreased muscle fatigue (12).
Glutathione proved to be crucial in the removal and detoxification of carcinogens, and elevated levels of glutathione in tumor cells provided protection from breast, bone marrow, colon, lung and larynx cancers (13).
A link was found between elevated glutathione levels and the slowing or prevention of mild cognitive impairment (MCI) and Alzheimer’s disease (14).

Regardless of how beneficial these antioxidant compounds are when tested in isolation, however, you’re much better off obtaining them from whole food sources like lamb – not just because natural is always better than synthetic, but because whole foods also contain a lot of other nutrients that help us absorb individual compounds more easily.

Grass-fed lamb is one of the healthiest and “cleanest” meats in the Western diet. As well as being a superb source of conjugated linoleic acid, whose benefits are substantial and well-documented, lamb is rich in several antioxidant compounds that have been proven, time and time again, to treat conditions ranging from chronic fatigue to full-blown cancer.

Lamb is also a great source of regular nutrients (especially vitamin B12, selenium and protein), and is suitable for individuals following a ketogenic or paleo-inspired diet.

Which Lamb Is the Healthiest to Purchase?

The most nutritious lamb to consume is grass-fed (aka pasture-raised) lamb from certified organic farms. Aside from being far less likely to be contaminated by hormone residues, antibiotics and other unwelcome chemicals, lamb from organic farms tends to be sourced from animals that are much more humanely treated than conventionally-raised animals. 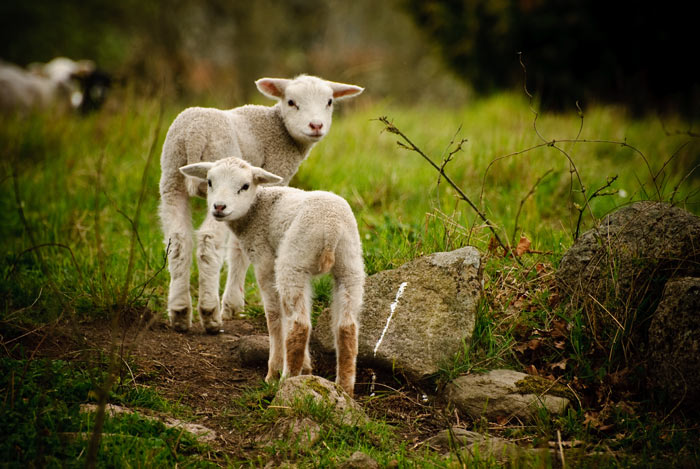 If you must opt for non-organic lamb, then look for prime or choice cuts that are pink in color and firm in texture. Furthermore, the fat should ideally be yellow in color, not white. Yellow-colored fat is a sign of high carotenoid concentrations, while white-colored fat is a sign of limited nutrients (15). Sadly, most supermarkets avoid selling lamb with yellow-colored fat for both cosmetic and financial reasons (most consumers erroneously assume that yellow means contaminated).

That said, it doesn’t really matter what you choose because the fat should always be removed from non-organic meat (lamb or otherwise). All toxins accumulate in the fat, and non-organic meat contains a lot of toxins.

Since lamb spoils easily, it should always be stored in its original packaging at a cold temperature. If you intend to cook the meat before its “use-by” date, then it’s fine to keep it in the refrigerator. Otherwise, freeze it.

Ground lamb should keep in the freezer for between three and four months, while lamb chops and roasts keep for six to nine months. Fully defrost all cuts before cooking them.

Lamb is easy to overcook, so it’s always a good idea to cook it using the methods that keep it tender and moist… and this can vary by cut. For example, lamb chops and racks of lamb are best roasted, ground lamb is best sautéed, lamb shank and breast is best braised, and lamb shoulder is best made into a stew. Moreover, since the bacteria is usually found on the outside of the meat, lamb can be consumed when it’s pink (i.e., “rare”) on the inside.

As for eating lamb raw… don’t even think about it. 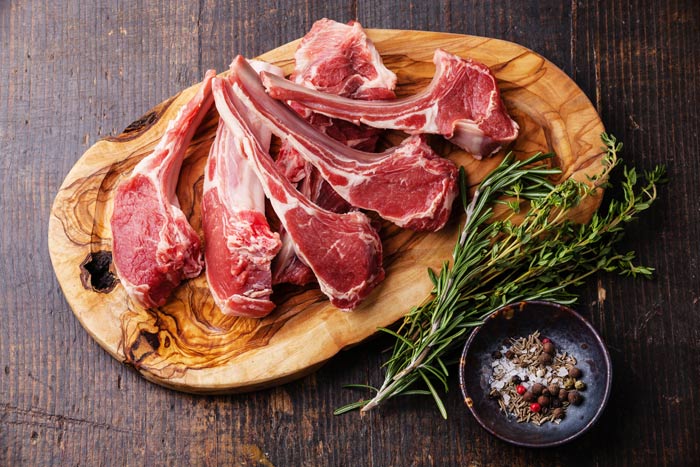