Kale: One of the World’s Most Nutritious Vegetables

You have to hand it to kale: this is a vegetable that knows how to be loved.

During the harsh winters of Europe in the Middles Ages, for instance, kale would be one of the few vegetables that could withstand temperatures as low as 10 degrees… much to the joy of hungry peasants. Throughout World War II, many British citizens relied upon kale for sustenance during periods of extensive rationing. Even today, certain towns in northern Germany host annual kale festivals, where this coarse, curly-leafed cabbage is celebrated for its unique flavor and culinary versatility. 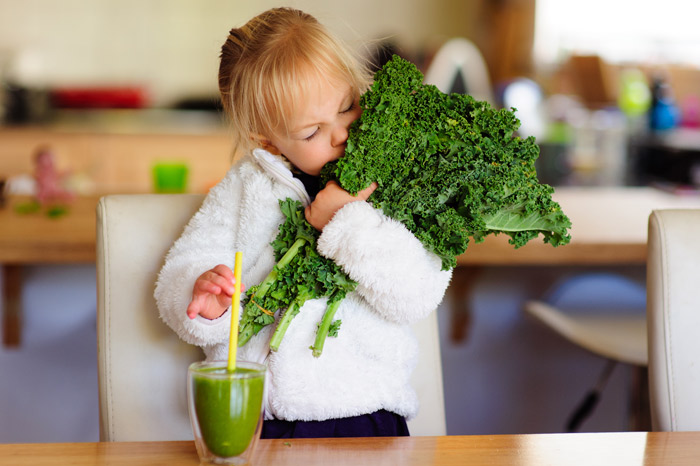 Kale, it seems, is one of those vegetables that can do no wrong. It is hardy, easy to grow, pleasant-tasting, attractive and – as we’re about to find out – really nutritious!

Why Is Kale Good for You?

According to NutritionData, one cup of cooked kale is:

Kale’s nutritional profile is, in a word, robust. Aside from its incredible concentrations of vitamins A, C and K (which we’ll discuss in more detail shortly), kale is high in several important trace minerals, including bone-boosting manganese. 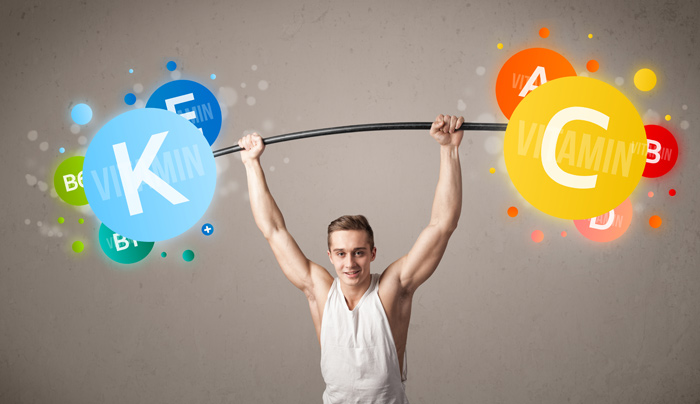 Kale is a champion of vitamins K and C

For some reason, a lot of people like to compare kale to broccoli, as though both vegetables are competing with each other for the title of “healthiest green.” If I were forced to make a comparison, then yes, kale is probably the healthiest of the two foods (even if broccoli does beat kale in the B vitamin department). Ultimately, though, a balanced diet should incorporate both of them.

Research into the Health Benefits of Kale

One of the Best Sources of Blood-Boosting Vitamin K

No, the numbers on the nutrition chart above are not a typo. One cup of kale really does contain 1062 micrograms of vitamin K, which is an eye-watering 1328% of our daily value (DV). Needless to say, this makes kale one of the greatest sources of vitamin K in the natural world!

So, what is vitamin K? Is it as important as the better-known vitamins C and E? Of course!

Simply put, vitamin K is a group of fat-soluble vitamins that aid blood clot formation in our bodies (the “K” actually stands for “koagulation,” the German word for “clotting”). Consequently, it plays an important role in maintaining cardiovascular function, bone health and more.

Don’t take my word for it, though. Check out what researchers have learned about vitamin K: 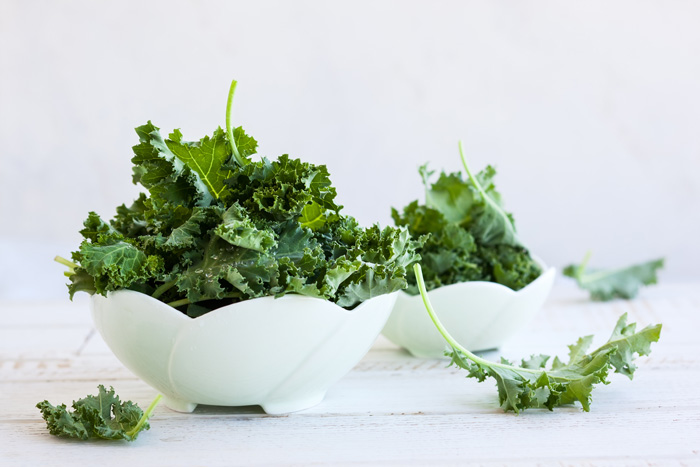 Like most green foods, kale is good for our blood

These studies show that eating more vitamin K-rich kale can do wonders for our blood, bones and brain. Kale is especially good at safeguarding us against heart disease, which remains the world’s top killer.

There are actually five different kinds of vitamin K. The type of vitamin K found in kale and other green plants is vitamin K1, or phylloquinone, which goes directly to our livers and prevents blood clotting.

Vitamin K2, or menaquinone, is a form of vitamin K found in organic, grass-fed animal products, such as meat and eggs, as well as certain fermented foods, such as natto. Like vitamin K1, vitamin K2 benefits our cardiovascular system.

Finally, there are vitamins K3, K4 and K5, which are used in modern medicine and the pet food industry. Since they are synthetic in nature, I do not recommend using them.

Most of the studies listed above used vitamin K1 (phylloquinone) in their research, and for good reason: vitamin K1 is the most accessible form of the vitamin. That said, vitamin K2 has benefits separate from vitamin K1’s, so don’t neglect your grass-fed beef and fermented vegetables!

Packed with Vitamins A and C

According to NutritionData, one cup of cooked kale contains 354% of our DV of vitamin A. Since kale is a plant, this vitamin A will be in the form of provitamin A carotenoids, such as beta-carotene, rather than the preformed (and more potent) vitamin A found in animal products like liver (6). Don’t get discouraged, though. Our bodies can still utilize plant-based vitamin A, and it has been linked to several health benefits.

A study published in the journal Archives of Ophthalmology, for instance, found that beta-carotene (as well as zinc and certain antioxidant supplements) “significantly reduced” the odds of people aged 55 or over from developing age-related macular degeneration, which is the biggest cause of vision loss in the developed world (7).

Another study, published in the Journal of Nutrition, found that dietary carotenoids (including beta-carotene, alpha-carotene and lycopene) reduced the prevalence of metabolic syndrome in middle-aged and elderly men. Specifically, the men experienced lower body fat masses and reduced waist circumferences (8).

Therefore, eating more carotenoid-rich foods, such as kale, is an excellent way to guard ourselves from age-related vision loss, type 2 diabetes and CVD! 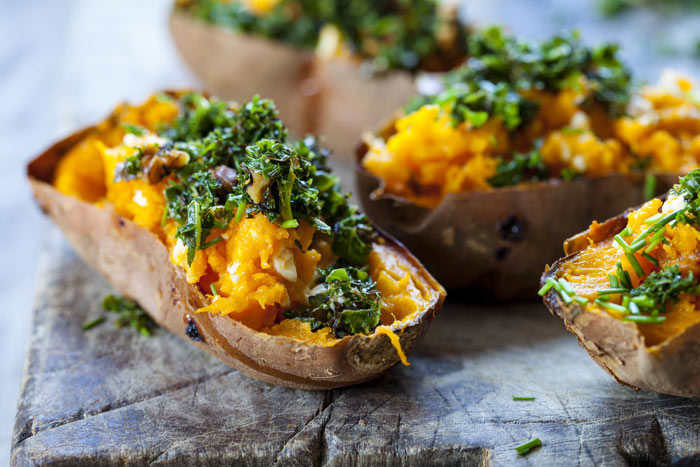 Finally, there is vitamin C. Most people already know a lot about this truly special nutrient, so I’ll be quick.

Vitamin C, or ascorbic acid, is a fat-soluble vitamin that aids the formation of collagen, the main structural protein in our bodies. When our bodies obtain enough vitamin C from whole foods, we enjoy improved skin health, including quicker wound healing, decreased wrinkling and reduced damage from ultraviolet (UV) exposure. When deficient in vitamin C, we suffer from impaired wound healing, greater susceptibility to photodamage and wrinkling, and good ol’ fashioned dry skin (9). 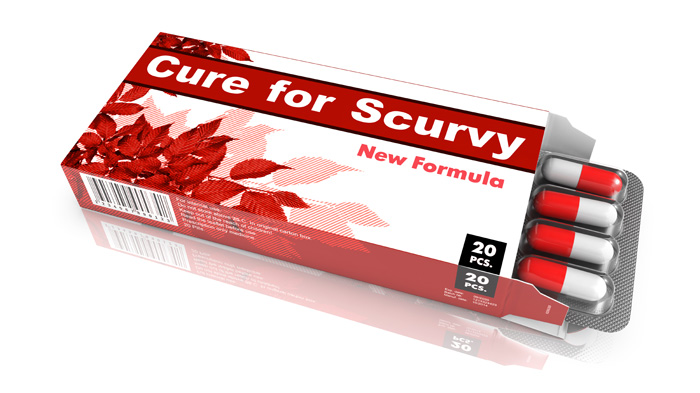 I’ve got a better idea: eat kale instead

Furthermore, vitamin C is one of the most powerful antioxidants in nature. This means that vitamin C-rich foods, such as kale, can help scavenge the free radicals responsible for several degenerative conditions, including dementia.

Like broccoli, spinach and other cruciferous vegetables, kale is packed with phytochemicals that fight cancer and other serious diseases. These include: 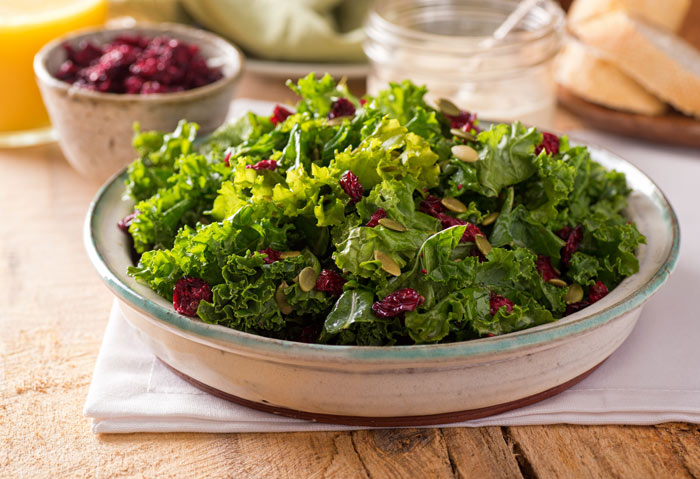 Sulforaphane – Sulforaphane is an organic sulfur compound that belongs to an unpronounceable group of natural chemicals called isothiocyanates. It is one of the finest anti-cancer substances in the plant world, and is shown to kill tumor cells lines (21), inhibit tumor growth associated with non-small lung cancer cells (the commonest type of lung cancer) (22), suppress the proliferation of cancer cells in the ovaries, pancreas, liver and cervix, and even treat human T-cell leukemia cells (23).
Indole-3-carbinol – Indole-3-carbinol is produced by the breakdown of glucobrassicin, a glucosinolate (plant component) found in most cruciferous plants, including kale. Aside from containing similar anti-cancer properties to the compounds above (24), indole-3-carbinol is known for its hormone-balancing effects. Research published in The Journal of Nutrition in 2003, for instance, found that indole-3-carbinol was a negative regulator of estrogen that could stimulate apoptosis in estrogen-induced tumor growths (25). This makes indole-3-carbinol a blessing in today’s world of gender-bending chemicals.

Some people are hesitant to eat kale regularly because they believe that it is high in oxalic acid, an organic compound that can contribute to kidney stones in susceptible individuals. However, this isn’t entirely true.

While many green vegetables, such as spinach, chives and parsley, are high in oxalic acid and shouldn’t be over-consumed, kale is not one of them. In fact, according to data provided by the United States Department of Agriculture (USDA), 100 grams of kale contains a measly 0.2 grams of oxalic acid – less oxalic acid than potatoes, onions and other non-green vegetables! (26) Therefore, don’t feel guilty about eating a big plate of kale now and then – your body will love it! 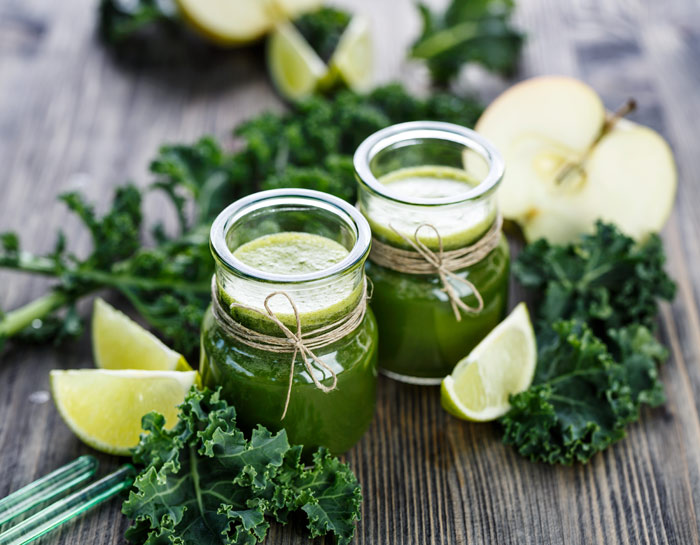 A big glass of kale juice, on the other hand, might not be a good idea. Stick to whole foods whenever possible!

Unsurprisingly, kale is a fantastic weight loss food. There are a few reasons for this:

One cup of kale contains only 36 calories, which is practically nothing
Kale contains generous amounts of soluble and insoluble fiber, which aid digestion and increase feelings of fullness, minimizing the risk of overeating
Kale is relatively low in carbohydrates, and is considered a safe food for people following paleo and ketogenic diets
Kale has a glycemic load of 3, meaning it barely affects blood sugar levels at all (sadly, the same cannot be said of many fruits and sweet vegetables)

The result is a vegetable that is virtually impossible to gain weight from, and which is suitable for everybody!

Should I Purchase Organic Kale?

Yes, kale should always be purchased in organic form.

While non-organic kale isn’t a member of the so-called “Dirty Dozen” (a group of 12 foods most likely to hold pesticide residues when grown conventionally), it is frequently contaminated by insecticides that compromise human nervous systems (27). This isn’t too surprising, since kale leaves remain completely exposed to the elements throughout their lives and have little choice but to absorb environmental and agricultural toxins. 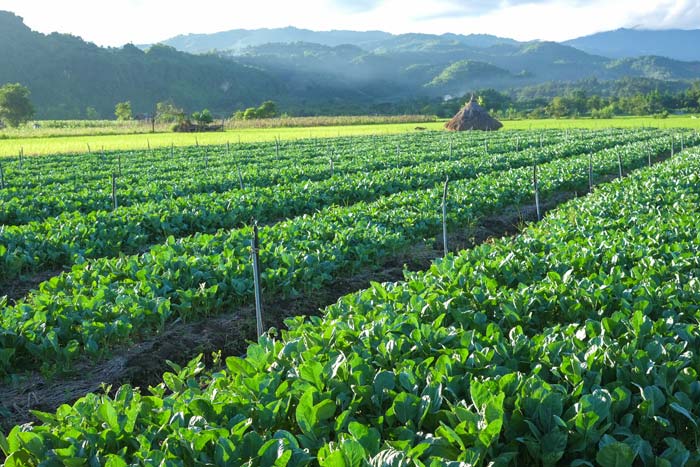 This is an organic farm, so these lucky kale plants don’t need to be worried about being sprayed

If you don’t have access to organic kale, I recommend purchasing broccoli instead (broccoli is safer to consume in non-organic form, since it is seldom sprayed). Washing non-organic kale with water and baking soda might remove some impurities, but I wouldn’t risk it.

Can Kale Be Eaten Raw?

Yes, kale can be eaten raw… but it’s not a good idea.

Kale contains thiocyanate, a compound that blocks an important thyroid enzyme called thyroperoxidase (TPO) when consumed raw. Since TPO is responsible for maintaining iodine intake, eating too much raw kale can result in goiters, or swelling of the neck caused by enlargement of the thyroid (28). Fortunately, thiocyanate is deactivated by as much as 90% when cooked.

Therefore, I always recommend eating kale in cooked form whenever possible (steaming is the best option, followed by boiling). It’s not a big deal if you eat raw kale from time to time, of course, but I wouldn’t make a habit of it. The last thing you want to do is compromise thyroid function for the sake of a few extra nutrients. 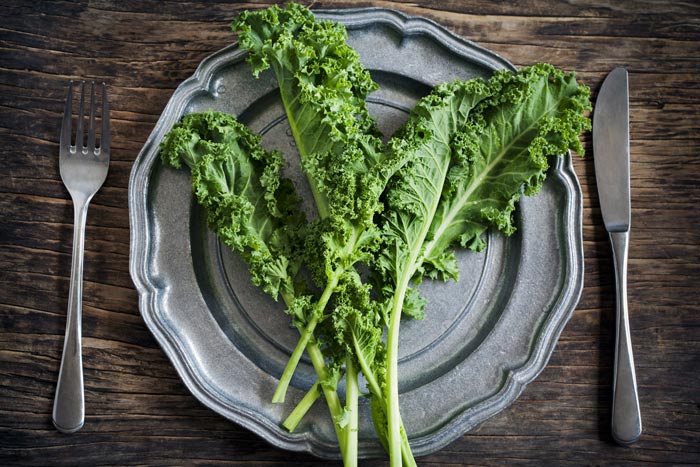 Raw kale: it’s just not worth it