Flaxseeds: The World’s Best Source of Lignans and Alpha-Linolenic Acid 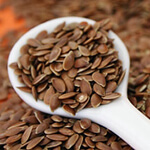 Flax, also called linseed, is a flowering plant native to the temperate and subtropical regions of the world. It is one of mankind’s oldest cultivated crops, and its bast fibers are commonly used to produce the soft and natural textile linen, from which a large number of environmentally-friendly garments are made. The seeds of the plant, though usually processed to make linseed oil, are also nutritious foods in their own right and contain many health benefits.

Bursting with alpha-linolenic acid – Flaxseeds are also a fantastic source of alpha-linolenic acid, an omega-3 fatty acid found in plants that our bodies use as “raw material” to synthesize the other two omega-3 acids, DHA and EPA. This process allows our bodies to create enough omega-3 oils to balance the inflammatory omega-6 and -9 oils that are so common in modern diets. For this reason, ground flaxseeds are the perfect “pure” omega-3 supplement and are better sources of it than fish oil (which supplies us with DHA and EPA “as is,” and doesn’t give our bodies the opportunity to optimize their omega-3 acid balance).

Omega-3 fatty acids are essential polyunsaturated fatty acids with cholesterol-lowering properties. These fats are also highly concentrated in the brain, and are important for maintaining cognitive function (particularly that relating to memory and performance).

Rich in soluble fiber – Two tablespoons of ground flaxseed contains almost four grams of fiber, or 16 percent of our recommended daily intake (RDI). Most of this fiber is soluble fiber, which forms a gel in our stomach and promotes a feeling a fullness, thus discouraging overeating. Therefore, the next time you’re feeling hungry in-between meals or are simply looking to lose weight, eat some ground flaxseeds as a snack.

Packed with essential minerals – Though not as nutritionally dense as chia seeds, flaxseeds do contain numerous trace minerals and macrominerals. Two tablespoons of them will supply us with between 1 and 18 percent of our RDI of calcium, iron, magnesium, phosphorus, potassium, zinc, copper, manganese, and selenium. Two tablespoons also contain six percent of our RDI of protein, which is good news for vegetarians and other people who avoid animal products.

Flaxseeds are best eaten grounded as a snack (whole flaxseeds are notoriously difficult to digest). However, they tolerate heat well (unlike flaxseed oil, which oxidizes easily) and can be incorporated into baked goods, cereals, and much more. Like chia seeds, they tend to have a neutral taste and can be added to almost anything without compromising its flavor.