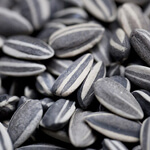 Sunflower seeds are the fruits of the beautiful sunflower plant, which is native to North America and is characterized by its impressive height and light yellow petals. These seeds possess a firm texture and a mildly nutty taste, and were a significant source of food for the American Indians. Sunflower seeds remain a popular food in contemporary America, too, although they’re more likely to be consumed raw as a snack than incorporated into cooked meals.

While sunflower seeds don’t quite reach the nutritional heights of chia seeds or hemp seeds, they’re still an enormously healthy food. Aside from being a vital source of natural energy, they are rich in a large number of nutrients in which many of us are unknowingly deficient, making them an excellent addition to any Western diet.

Packed with fiber and protein – One cup of dried sunflower seeds supplies us with 16 percent of our recommended daily intake (RDI) of fiber and 19 percent of our RDI of protein. Most of the fiber found in sunflower seeds is the insoluble kind, which remains intact in our digestive tracts and flushes the colon of accumulated waste. This fiber content makes sunflower seeds a good constipation aid as well as a suitable food for diabetics (fibrous foods tend to have a low glycemic load). Moreover, the protein contained in sunflower seeds contains all eight essential amino acids, making them a fantastic complete protein source for vegetarians and vegans.

High in omega fatty acids – Like most plant seeds, sunflower seeds are rich in omega-3 and -6 fatty acids, which are essential fatty acids that our bodies cannot make themselves. While the main omega-3 fatty acid found in sunflower seeds, alpha-linolenic acid (ALA), is not as potent as the EPA and DHA found in animal products such as fish oil, its benefits should not be underestimated. For example, a study published in the European Journal of Clinical Nutrition showed that ALA could help lower glucose and high triglyceride levels in human participants. Another study, published in Applied Physiology, Nutrition, and Metabolism, suggested that ALA could help treat symptoms associated with obesity in animal models.

Rich in phytosterols – A study published in the Journal of Agricultural and Food Chemistry found that sunflower seeds (and pistachios) had the richest levels of phytosterols out of all the nuts and seeds commonly consumed in the United States as a snack. Phytosterols are plant compounds whose chemical structures closely resemble that of cholesterol, and are believed to reduce LDL cholesterol levels in the bloodstream when consumed in sufficient amounts. Additionally, a study featured in Life Sciences noted that “[p]hytosterols have been shown experimentally to inhibit colon cancer development.”

Excellent source of vitamin E – One cup of dried sunflower seeds provides us with a whopping 15.3 milligrams of vitamin E, or 76 percent of our RDI. A fat-soluble antioxidant, vitamin E travels throughout our bodies, scavenging free radicals that would otherwise harm fat-containing molecules and structures such as brain cells, cholesterol, and cell membranes. Aside from protecting us from degenerative diseases, this antioxidant activity also produces anti-aging benefits. Vitamin E is also a potent anti-inflammatory and can reduce the symptoms associated with inflammatory diseases such as asthma and rheumatoid arthritis.

Sunflower seeds are high in numerous other nutrients including calcium, iron, magnesium, phosphorus, potassium, zinc, copper, manganese, selenium, and most B vitamins. The seeds’ magnesium content is especially significant, since between 60 and 80 percent of the American population are estimated to be deficient in this essential, calcium-balancing mineral.