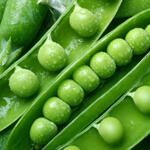 The common green pea, which is the seed of the Pisum sativum plant, has been a staple food across the world for centuries. Indeed, archaeologists have found that peas were regularly consumed as far back as the late neolithic era of modern Syria, Turkey, Jordan, and Greece. Immature peas were also a popular food in medieval Europe, whose inhabitants often incorporated them into soups and gruel.

Due to their small size, sweet taste, and starchy textures, a lot of people assume that peas are average in the nutrition department. In reality, however, peas are extraordinarily dense in nutrients – far more so, in fact, than many other prominent vegetables.

Rich in cancer-fighting coumestrol – As their green color indicates, peas are rich in numerous disease-fighting phytonutrients. One of these bioactive chemicals is coumestrol, a polyphenol that has been linked to cancer prevention. One study published in the International Journal of Cancer in September 2009, for instance, found that the daily consumption of peas and other legumes could significantly reduce the risk of stomach cancer, particularly if the individual obtained more than two milligrams of coumestrol per day from them.

Additional phytonutrients – Peas are also rich in saponins (pisumsaponins I and II, and pisomosides A and B), phenolic acids (caffeic and ferulic acid), and several flavanols (including catechin and epicatechin). Most of these phytonutrients possess antioxidant and anti-inflammatory properties, and have been known to prevent degenerative diseases like Alzheimer’s disease, arthritis, and age-related macular degeneration. Antioxidants also provide anti-aging benefits, since they scavenge the free radicals responsible for damaging DNA and cells.

Possible secret to longevity – In his 2008 book The Blue Zones: Lessons for Living Longer From the People Who’ve Lived the Longest, the American writer and explorer Dan Buettner found that legumes such as peas were a staple food amongst the world’s longest-living people. In fact, virtually all of the centenarians that Buettner’s team examined consumed legumes on a daily basis. Could the dense concentrations of phytochemicals in most legumes help explain this longevity?

Dense in nutrients – One cup of cooked peas supplies our bodies with 26 percent of our recommended daily intake (RDI) of the vision and immunity booster vitamin A, 38 percent of our RDI of the powerful disease destroyer vitamin C, and 52 percent of the RDI of the blood booster vitamin K. They also contain huge amounts of fiber, omega-3 fatty acids (mostly in the form of alpha-linolenic acid), and many essential minerals and B vitamins. Peas also boast twice the amount of protein of most other green vegetables. In fact, pea protein contains a similar amino acid profile to whey protein, which bodybuilders often use as a protein supplement.