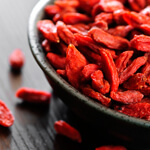 Goji berries, also called wolfberries, are the fruits of the Lycium barbarum and Lycium chinense plants. Native to southeastern Europe and Asia, these fruits are characterized by their bright orange-red color and raisin-like shape. They have been cultivated in Asia for over 2000 years, and have been nicknamed “red diamonds” due to their unusually high nutritional value. Traditional Chinese medicine was perhaps the first healing system to understand and utilize the berries for medicinal purposes, though their reputation continues to grow in the West, where many researchers regard them as superfruits.

Antioxidant-rich – According to Jodi Helmer, the author of Goji Berries: Antioxidant Supreme, goji berries are an excellent source of antioxidants such as polyphenols, flavonoids, carotenoids, and vitamins A, C, and E. In fact, the goji berry contains approximately 500 times more vitamin C per weight than an orange and considerably more beta-carotene than carrots. These findings are reinforced by the goji berries’ high Oxygen Radical Absorbance Capacity (ORAC) score of 3,290, which shows that they contain much larger concentrations of antioxidants than most other fruits. Since antioxidants help neutralize the cell-damaging effects of free radicals, eating more antioxidant-rich foods like goji berries can help guard us from degenerative diseases such as rheumatoid arthritis, Alzheimer’s disease, and most types of cancer.

Prevent vision loss – According to a study published in the 2005 issue of the British Journal of Nutrition, goji berries contain properties that prevent the risk of vision loss. Researchers at Hong Kong Polytechnic University fed 14 healthy volunteers a serving of 15 grams of goji berries daily for 28 days while comparing their blood levels to 13 control volunteers. After 28 days, the volunteers who consumed the fruits experienced significantly raised zeaxanthin levels in the blood (zeaxanthin is an antioxidant present in goji berries that helps preserve eyesight). Therefore, if you’re suffering from poor or deteriorating eyesight, consider adding more goji berries to your diet.

Improve male fertility – Goji berries have long been considered a male aphrodisiac in China, and more studies are starting to confirm these allegations. According to a Chinese study published in the July 2006 issue of Life Sciences, for example, rats that were fed goji berries maintained testicular function when subjected to heat. The researchers also found that certain constituents in goji berries regulated the release of sexual hormones, boosted hormone levels, and improved the quality and quantity of sperm in male rats.

High in nutrients – Though goji berries are best-known for their antioxidant activity, they also contain an impressive number of vitamins and minerals. According to Paul Gross in his report, The Top 20 Superfruits, a quarter cup of goji berries contains 11 essential vitamins and 22 trace minerals, including 24 percent of our recommended daily intake (RDI) of potassium, 18 percent of our RDI of zinc, and a whopping 100 percent of our RDI of iron, copper, and riboflavin. They also contain 8 polysaccharides, a primary source of dietary fiber.

A large number of goji berry products are available, and it can be difficult to decide which ones are the best quality. Generally speaking, you want to look for goji products that are certified organic and sustainably-sourced.