Cauliflower: More Than Just a Pale Imitation of Broccoli 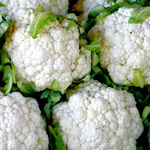 It’s a well-known fact that the more colorful a vegetable is, the more healthy it’s likely to be. After all, color indicates the presence of carotenoids, which are the antioxidants that give most vegetables their greatest benefits. Consequently, many of us assume that bland-looking vegetables, such as regular white cauliflower, are lacking in the health department.

Sadly, it is true that cauliflower lacks certain nutrients, such as chlorophyll, that are present in most other vegetables because their leaves shield them from the sun during growth. Despite this drawback, there is still a lot to love about cauliflowers. In fact, when cooked properly (e.g. boiled, steamed, or sauteed), cauliflower contains higher concentrations of certain essential nutrients than many other whole foods.

Rich in cancer-fighting phytochemicals – Cauliflower contains large quantities of sulforaphane and indole-3-carbinol (I3C), which are two phytochemicals with proven cancer-fighting properties. Sulfurophane is a sulfur compound which, according to a study published in Carcinogenesis in December 2008, can decrease the rate of chemically-induced mammary tumors in animals. I3C has also been shown to prevent cancer by increasing the body’s production of enzymes that flush carcinogens and toxins out of the body before they can harm cells. I3C also contains anti-tumor agents, and is a proven anti-inflammatory that could help treat painful conditions such as arthritis, sprains, and period pains.

Boosts kidney and cardiovascular health – A study published in the American Journal of Hypertension in February 2012 discovered that sulforaphane could also normalize kidney function and significantly reduce blood pressure. The researchers attributed this benefit to sulfuraphane’s ability to improve DNA methylation, which is needed to maintain gene expression and cellular function. Given the scope of this benefit, eating more sulforaphane-rich foods such as cauliflower might contain many other health benefits not yet proven by science.

Digestive support – One cup of boiled cauliflower contains 12 percent of our recommended daily intake (RDI) of fiber, which sweeps our digestive system of accumulated waste. It is also rich in the natural compound glucoraphanin, which appears to be found exclusively in broccoli and cauliflower. Glucoraphanin is actually the precursor to the aforementioned sulforaphane, and contains numerous digestive benefits. In fact, a 2009 study featured in Cancer Prevention Research showed that glucoraphanin-sourced sulforaphane had a protective effect on the stomach lining and is especially effective at guarding us from the destructive bacterium Helicobacter pylori, which can increase our risk of stomach ulcers and cancer.

A good source of vitamin C – One cup of boiled cauliflower also contains almost 100 percent of our RDI of the West’s favorite nutrient: vitamin C. According to the World’s Healthiest Foods website, this amount is more vitamin C per weight than most other fruits and vegetables, including certain leafy green vegetables. An essential antioxidant, vitamin C helps protect us from the cell-destroying effects of free radicals and also helps us to produce collagen and manufacture certain neurotransmitters. Without it, we would literally fall apart.

High in brain-boosting choline – Like broccoli, cauliflower is a fantastic natural source of the B vitamin choline. Choline is a precursor to the important neurotransmitter acetylcholine, and an increased choline intake is regularly linked to improved cognitive function, particularly among fetuses. For example, a 2010 study published in NIH Research Matters showed that the fetuses of pregnant women who suffered from a choline deficiency experienced reduced blood vessel growth in the brain. Another study published in the Journal of the American College of Nutrition found that pregnant rats that were fed choline supplements gave birth to pups that enjoyed lifelong memory enhancements.