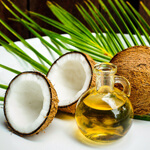 While the “superfood” label is often overused in natural health circles, most researchers will admit that coconut oil deserves it. This edible oil, which is produced from the flesh of coconuts, has been shown to possess amazing antiviral, antifungal, and antibacterial properties, improve blood cholesterol levels, boost energy, and much more. However, a peer-reviewed Brazilian study has also found that consuming just 30 milliliters (1 ounce) of coconut oil a day can help treat abdominal obesity – providing yet more evidence that healthy saturated fats are essential for long-term weight loss.

For the study, which was published in the medical journal Lipids, the researchers assembled 40 female volunteers between the ages of 20 and 40 who suffered from abdominal obesity. Over a 12-week period, the women were given 30 milliliters of either soybean oil or coconut oil on a daily basis. During this time, the volunteers were instructed to follow their regular diet and walk for 50 minutes per day. At the end of the 12-week period, the researchers found that the women who were given the coconut oil experienced a significant reduction in both BMI and waist circumference, as well as an increase in “good” HDL cholesterol. These results were not found in the group that was given soybean oil.

“It appears that dietetic supplementation with coconut oil does not cause dyslipidemia and seems to promote a reduction in abdominal obesity,” the researchers concluded.

Though coconut oil was demonized for decades due to its considerable saturated fat content, scientists now understand that there is a big difference between the long-chain triglycerides (LCTs) found in foods like cheese and meat and the medium-chain triglycerides (MCTs) found in foods like coconut oil. Unlike the former, which must be broken down in the intestines and transported to the blood before they can be used for energy, the latter are metabolized very quickly and actually bypass the fat cells in which they might otherwise be stored. For this reason, dieters who choose to receive their fats from MCT-rich foods like coconut oil will experience the greatest long-term results.

Note: The best kind of coconut oil to purchase is organic, raw coconut oil. Refined coconut oil, which has been bleached and deodorized, has a compromised nutritional profile and, depending on the manner in which it was processed, might even contain harmful trans fats. Therefore, make sure that you always choose raw coconut oil that was extracted from fresh coconut meat. This kind of oil will possess the unmistakable scent of coconut, signifying minimal processing.