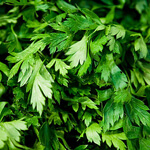 Depending on how one looks at it, parsley can be considered either a herb, spice, or vegetable. It is, however, most commonly known as a herb that can add a unique flavor or seasoning to any dish to which it is added. Indeed, it is extremely popular as a garnish, and many of the best chefs often add freshly chopped parsley atop their signature dishes before declaring them finished.

Despite parley’s reputation as a serviceable flavor-booster at best or a mere decoration at worst, in reality this bright green herb also contains a large number of health benefits that make it an excellent standalone food for health enthusiasts.

Cancer-fighting properties – Parsley contains an important compound called myristicin that can prevent the formation of cancerous tumors. Moreover, myristicin can also increase the production of an enzyme called glutathione-S-transferase that is also known to fight against cancerous cells and other oxidized cells in the body. Smokers in particular should add more parsley to their diet, since it is well-known for preventing lung cancer.

Antioxidant activity – Parsley is rich in essential antioxidants like vitamin A and vitamin C. Indeed, just one cup of parsley provides 100% of our daily recommended dosage of vitamin A and 130% of our daily recommended intake of vitamin C. Additionally, parsley also contains a flavonoid called luteolin that is extremely efficient at minimizing free radical damage in the body. Parsley also contains a wide range of other antioxidants such as limonene, eugenol, and alpha thujene, which all help the body to combat free radical damage.

Anti-inflammatory properties – Luteolin, the aforementioned antioxidant contained in parsley, also helps the body to cope with inflammation problems. Eating parsley regularly can help us cope and fight against inflammation-induced problems like arthritis of the bones and joints.

Immune system booster – As mentioned earlier, parsley has high levels of vitamin A and vitamin C, both of which can also strengthen the immune system. Vitamin A will fortify the mucous membranes in the body, making it impervious to bacterial infections. Vitamin C fortifies the immune system by boosting collagen production, which allows the body to repair itself and thus prevent its immune system from being compromised.

Good for the heart – Parsley contains an element called folate, otherwise known as vitamin B9, that can help regulate the production of an amino acid called homocysteine. This regulation is crucial, since high levels of homocysteine in the body can lead to a heart attack or stroke. Therefore, by adding just a little bit of parsley to your daily meals, you could help guard yourself from these serious consequences.

Strengthens bones – Parsley contains high levels of vitamin K, which is essential for the maintenance and growth of strong bones. Vitamin K, when made available to the body, can produce a protein called osteocalcin that keeps the bones in optimal condition. Moreover, vitamin K can help our bones by preventing a build-up of calcium, which can lead to weaker bones and even heart problems.

Improves kidney function – Parsley is a mild diuretic, meaning that it can promote more efficient functioning of the kidneys. Increased kidney function means that we have a better chance of detoxify ourselves, since the kidney can remove excess sodium and other elements that can, and often do, accumulate to toxic levels in the body.

Menstrual cramp relief – Numerous studies have shown that parsley, when consumed consistently during a menstrual cycle, has the ability to re-balance hormone levels in such a way that a woman will suffers fewer menstrual cramps. Parsley can also help avoid erratic menstruation cycles and premenstrual syndrome (more commonly known as PMS).