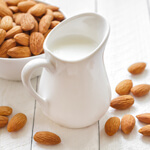 According to an article published on the Genetics Home Reference website, an estimated 65 percent of the world’s population has difficulty digesting lactose, a sugar found in animal milk, after infancy. While people of East Asian descent are the most likely to suffer from lactose intolerance, it also affects large populations of the United States and Europe. Shortly after consuming animal milk, these individuals often suffer from a host of unpleasant symptoms ranging from abdominal pain and bloating to nausea and diarrhea.

Fortunately, health food stores are starting to sell a growing number of plant-based milks that are free of lactose and the health issues associated with consuming animal milk. This article takes a closer look at the best of these plant-based milks, listing both their advantages and disadvantages so that you can decide which one is best for your needs.

Almond milk is made from ground almonds and is the best-selling plant-based milk in the United States. Though almond milk contains little to no natural protein or calcium, it’s not difficult to understand its growing popularity: Aside from being free of lactose, almond milk is also low on the glycemic index and contains the fewest calories of all plant-based milks. This makes it a great choice of milk for diabetics and individuals seeking to lose weight.

Unfortunately, many commercial brands of almond milk tend to be greater sources of filtered water than actual almond milk. This is especially true of the lower-quality, sweetened brands found on most supermarket shelves. Therefore, it’s a good idea to favor unsweetened, organic brands whenever possible for maximum benefits.

Rice milk is made from milled rice and water, and is characterized by its natural sweetness. Like almond milk, rice milk is naturally free from lactose and is well-suited for baking due to its low fat content. Rice milk is also the least allergenic of all milk alternatives, making it the safest choice for children and adults who suffer from allergy concerns.

However, rice milk does have its share of problems. It tends to be more carbohydrate-heavy than other milks, which makes it the least desirable choice for diabetics and people following low-carb diets. Moreover, rice milk isn’t really a great natural source of nutrients, which is why so many manufacturers enrich it with additional vitamins and minerals (usually calcium and vitamin D). Like almond milk, rice milk is best purchased in organic, unsweetened form.

Hemp milk is a nutty-flavored, lactose-free milk made from hemp seeds that have been soaked in water and ground up. It is arguably the most nutritious plant-based milk, containing a 3:1 ratio of omega-6 and omega-3 fatty acids as well as 10 essential amino acids (making it a great source of protein for vegetarians and vegans). Hemp milk is also naturally rich in numerous other nutrients, including magnesium, beta-carotene, calcium, iron, potassium, and most B vitamins.

Since hemp plants are still illegal to grow in the United States, American hemp milk manufacturers are forced to obtain their hemp seeds from international farmers. Consequently, hemp milk tends to be more expensive and more difficult to obtain than other plant-based milks. That said, more and more health food stores around the country are beginning to sell it, so shop around.