It’s hard not to feel bad for broccoli. Babies hate it. Children hate it. Most adults hate it. Even a huge number of vegetarians and vegans hate it… even if they don’t admit it.

The sad fact is that, for many people, broccoli encapsulates everything unappealing about vegetables. It tastes bad, it smells bad and – as if to add salt in the wound – it loves to elbow its way into curries and stir fries, sabotaging their deliciousness with cruciferous zeal.

I hope that, after reading this article, people won’t say anything mean about broccoli ever again. 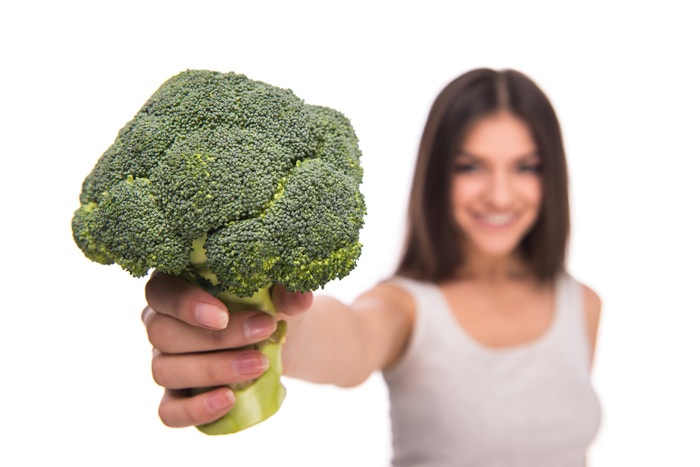 Why Is Broccoli Good for You?

According to NutritionData, half of a cup of cooked broccoli is:

Broccoli boasts one of the most robust nutritional profiles of all vegetables. Rather than provide extreme quantities of one nutrient and limited quantities of others, broccoli provides smaller quantities of most of the nutrients we need. It is, in many respects, a “jack of all trades,” at least in the mineral department. 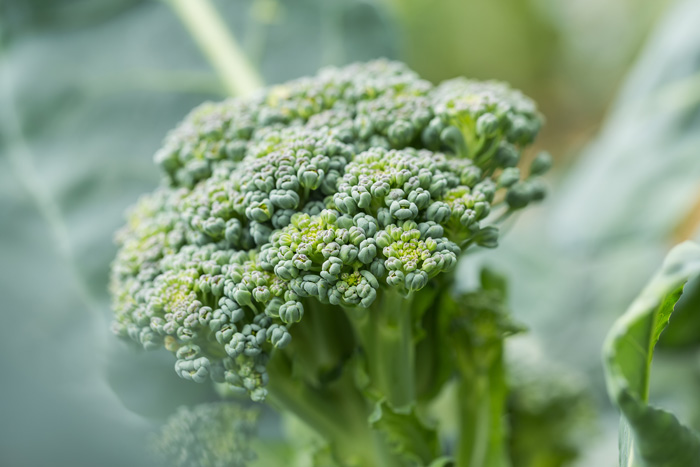 A jack of all trades

When most people talk about “broccoli” they’re talking about Calabrese broccoli, the green-headed, thick-stalked vegetable native to the Calabria region of southern Italy. However, there are two other types of broccoli commonly grown today: Sprouting broccoli, which has more heads and thinner stalks, and purple cauliflower, which is grown in Spain, Italy and the United Kingdom.

Despite their physical differences, these different types of broccoli contain a similar nutrient profile. Therefore, the health benefits listed in this article – though referring to Calabrese broccoli – can also be transferred to the other two kinds. At the end of the day, broccoli is broccoli.

Research into the Health Benefits of Broccoli

Though broccoli is rich in vitamins and minerals, its greatest health benefits arguably come from its dense concentrations of isothiocyanates, a family of sulfur-containing compounds that are unique to cruciferous vegetables. For example, three of the main isothiocyanates in broccoli – sulforaphane, kaempferol and quercetin – are proven to possess anti-cancer properties. 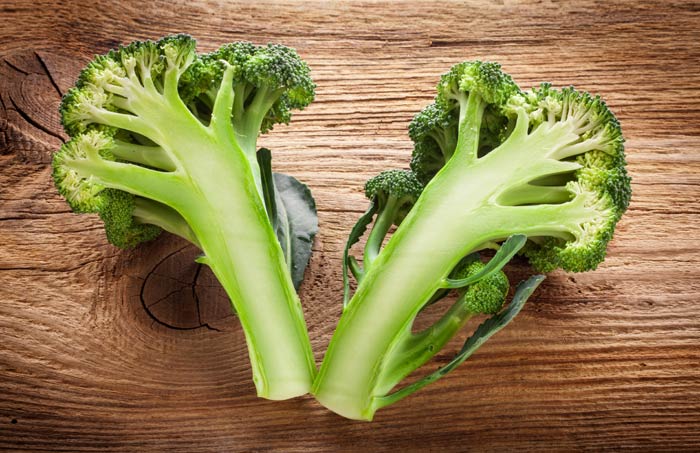 It might look bland on the inside, but broccoli is packed with special healing compounds

Check out what researchers have discovered about these truly special compounds:

I could go on… but you get the idea. The link between sulforaphane, kaempferol and quercetin and the prevention and treatment of many types of cancer (especially prostate and lung cancer) is well-documented. 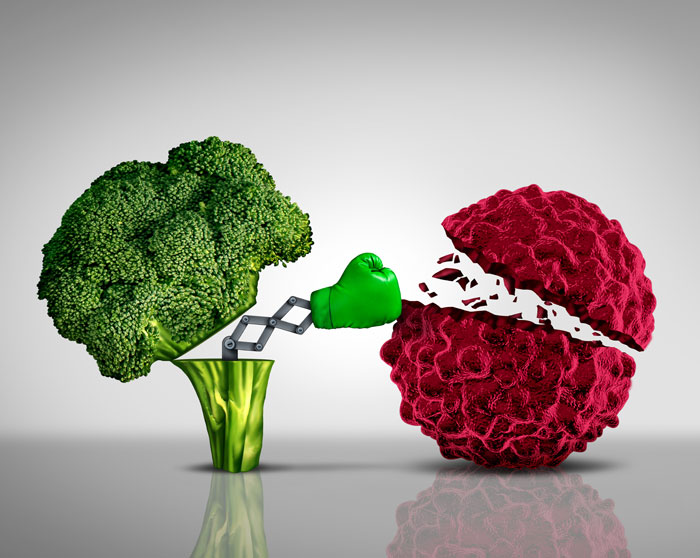 Funnily enough, most researchers admit that they don’t understand why isothiocyanates are so good at preventing cancer. We know that they possess antioxidant and anti-inflammatory properties, but no studies of which I am aware have offered definitive proof that this is why they’re effective in this regard.

What we can say for sure is that broccoli guards us from some of the most common and aggressive cancers around, and that’s good enough for me.

While broccoli and cauliflower belong to the same species and closely resemble each other, broccoli is the most nutritious of the two vegetables. One cup of broccoli, for instance, contains more calcium, fiber, protein, iron, magnesium, phosphorus, zinc, vitamin A, vitamin C and vitamin K than cauliflower. Cauliflower only beats broccoli in the potassium and folate department, and even then, not by much…

That’s not to say that eating cauliflower is a waste of time, but if it’s a choice between broccoli and cauliflower… why go for second best? 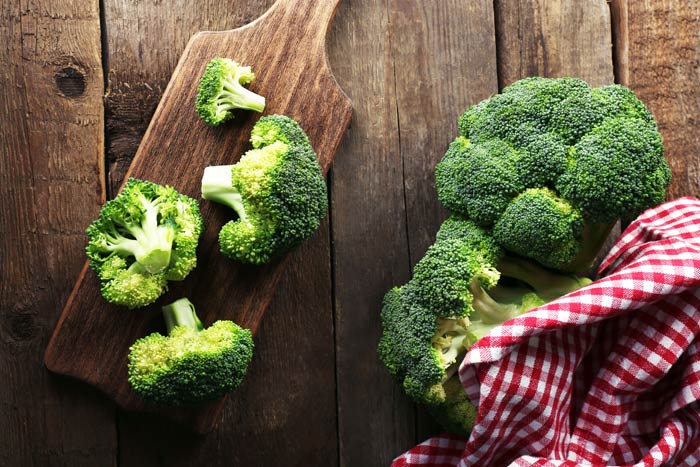 Broccoli has more benefits up its sleeve

Believe it or not, isothiocyanates don’t stop at cancer prevention. These wonderful compounds are linked to a whole plethora of additional health benefits – especially sulforaphane, the most well-researched of all the compounds in broccoli.

Here’s what isothiocyanates are also proven to do for us: 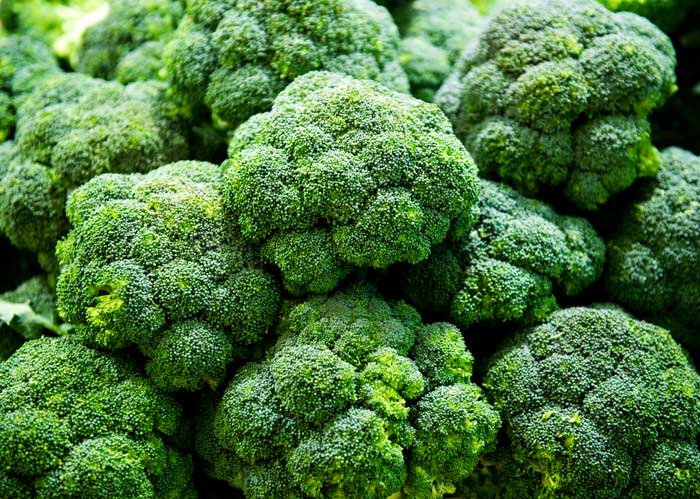 According to a 2011 review, a link was found between kaempferol and anti-inflammatory, anticancer, antimicrobial, cardioprotective, neuroprotective, antidiabetic, analgesic, antiallergic, anti-osteoporotic, antioxidant, anxiolytic, and estrogenic/antiestrogenic activities (phew!) (13).
Quercetin lowered the blood pressure of rats, and the researchers concluded that it could do the same for hypertensive humans (14).

It might seem miraculous that these antioxidant compounds can treat such a varied list of degenerative diseases, but it’s not. All of these diseases tend to have one common cause (namely, long-term proliferation of free radicals), so when a compound is proven to treat one of them, studies usually find that it can treat the others as well.

High in Vision-Boosting Lutein and Zeaxanthin

Like most colorful vegetables, broccoli is a good source of lutein and zeaxanthin, which are important carotenoids proven to maintain and boost eye health. A study published in the journal Investigative Ophthalmology & Visual Science, for instance, discovered a close link between high plasma lutein and zeaxanthin and a reduced risk of nuclear cataracts and age-related macular degeneration – two of the most common eye disorders associated with aging (15).

Another study, published in the same journal, found that daily supplementation with lutein and zeaxanthin led to improved visual performance in young volunteers (16). 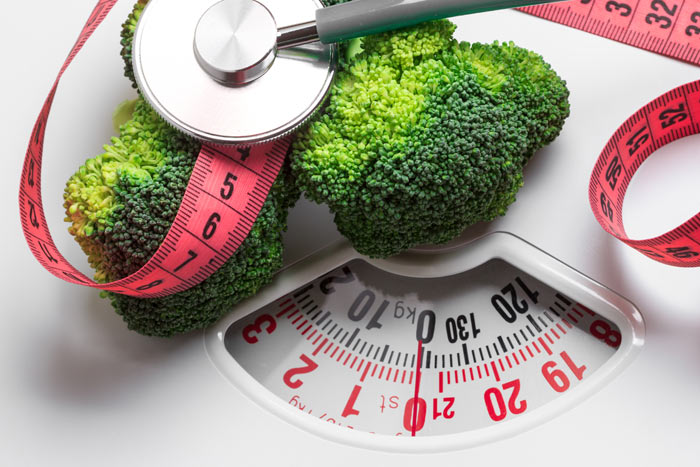 Being low in calories and high in fiber, broccoli is also an effective weight loss food… but we don’t need studies to tell us that

Should I Purchase Organic Broccoli?

Since broccoli doesn’t face as many pest threats as other vegetables (alas, even bugs don’t like broccoli), it tends to be sprayed less often. Thus, pesticide retention in non-organic broccoli is usually minimal.

The healthiest broccolis are the ones whose floret clusters are uniform in color (either dark green, purple-green or sage depending on variety) and lacking in bruised or yellow patches. Leaves should be vibrant rather than wilted, and the stalks and stems should be firm and without slimy spots.

The optimum way to store broccoli is to place it in a plastic bag, remove as much air as possible and then leave it in a refrigerator for up to 10 days. Frozen broccoli can keep for up to one year. Ideally, though, you’ll want to eat the broccoli as soon as possible, since many of its nutrients (especially vitamin C) begin to degrade the moment it is cut.

The Best Way to Eat Broccoli 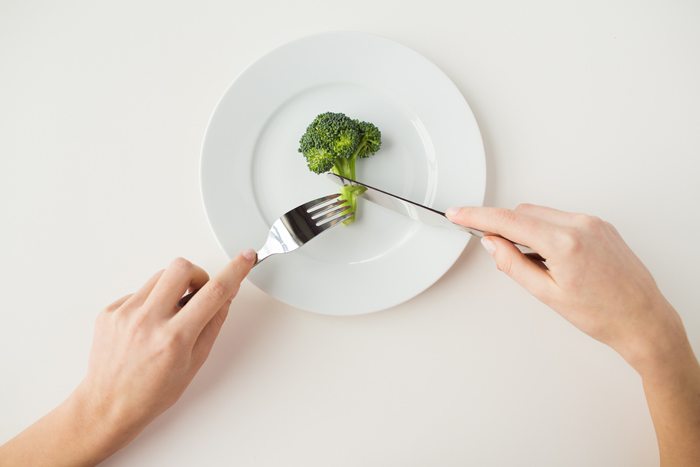 Seriously, is that all she’s going to eat?

According to research published in the Journal of Agricultural and Food Chemistry, raw broccoli provides much greater concentrations of sulforaphane than cooked broccoli (17).

Additionally, a study for the Journal of Zhejiang University found that many of broccoli’s healthiest compounds, including vitamin C and chlorophyll, were negatively affected by all forms of cooking except steaming (18).

You see, raw broccoli contains natural goitrogens that can interfere with thyroid function when regularly consumed. These goitrogens, however, become deactivated when even lightly cooked.