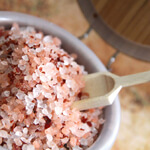 Salt is an essential nutrient that our bodies require for transporting nutrients into and out of our cells, regulating blood pressure, exchanging ions, and much more. However, not all salts are equal. Table salt, which has been stripped of all its minerals except sodium and chloride, for instance, will not have the same positive biological impact upon our bodies as pure, unrefined salt that boasts a robust mineral profile.

One of the most nutritious and “complete” salts we can purchase today is Himalayan salt, a salt that has been formed over millions of years in the Himalayas and which contains so many macrominerals and trace minerals that it is actually pink in color. In this article, you’ll learn more about the health benefits of Himalayan salt and how it can help transform even the blandest of meals into a powerhouse of nutrition.

Rich in minerals – Himalayan salt’s biggest draw, of course, is its dense concentration of minerals. According to a spectral analysis provided by The Meadow, Himalayan salt contains 84 minerals, electrolytes, and elements – a staggering number considering that only 118 elements are known to science. For this reason, adding more Himalayan salt to your diet can help rectify virtually any mineral deficiency you might have. Significantly, Himalayan salt contains iodine, magnesium, zinc, iron, and calcium – the five minerals in which the United States population are most deficient. Widespread iodine deficiencies (largely blamed on ongoing soil erosion) is an especially serious issue, since iodine plays an essential role in the functioning of the metabolism-controlling thyroid gland. If you add more Himalayan salt to your food, however, you won’t need to worry about an iodine deficiency ever again.

Sodium content – Unsurprisingly, one of the minerals in which Himalayan salt is richest is sodium. Though sodium suffers from a bad reputation due to its connection with processed foods, real, unprocessed sodium is needed by our bodies. It helps regulate blood volume and thus blood pressure, but also helps control muscle contractions, heart functions, and nerve transmissions. The RDI of sodium is between 1,500-2,300 milligrams for men and women between the ages of 9-50; one teaspoon of Himalayan salt contains approximately 400 milligrams of it.

Detoxification – Though it is traditionally eaten with food, Himalayan salt’s impressive mineral profile also lends it well to external detoxification. For example, you can’t find a better salt than Himalayan salt in which to bathe; its minerals and negative ions easily penetrate the skin, producing a cleansing and detoxifying effect that can leave your skin and mind feeling rejuvenated and invigorated for hours thereafter. Likewise, Himalayan salt has a positive effect on our air. It’s not a coincidence that virtually all reputable salt lamps are made using Himalayan salt rather than table salt; its negative ions bind themselves to positive ions in the air, neutralizing it and ridding it of pollutants.

Himalayan salt can be purchased in health food stores or online, and is usually sold as fine or coarse grains. Fine-grained Himalayan salt is recommend, since the small, unobtrusive crystals are far easier to incorporate into most meals. When purchasing your salt, remember to check that it is pink in color; this indicates that the salt is dense in minerals.