Along with coconut oil, eggs were one of the biggest victims of Dr. Ancel Keys’s popular “lipid hypothesis” of the 1950s, which claimed a link between high fat consumption and heart disease. A decade thereafter, the humble egg shifted from being a staple breakfast item of Westerners to public enemy number #1 – a food so radiant with Lovecraftian malevolence that even being in the same room as one could induce atherosclerosis by proxy. 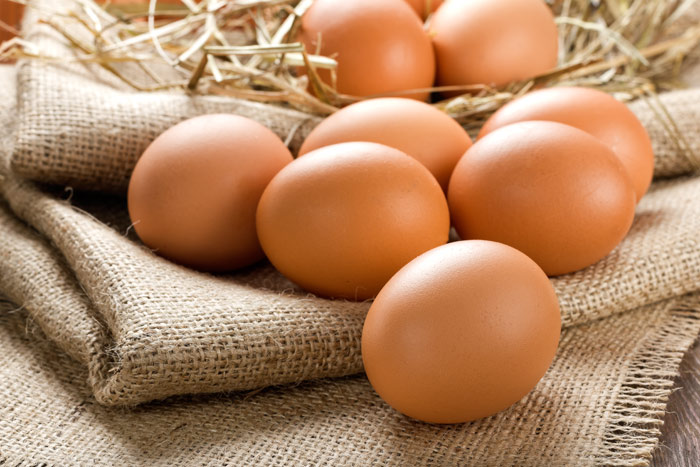 Don’t look at them, you’re only making them angrier

Okay, maybe that was an exaggeration… but only slightly. It’s true that eggs received an unfairly bad rap during the second half of the twentieth century, and even now – long after the lipid hypothesis was exposed as flawed – many baby boomers still recoil at the thought of eating egg yolks.

However, our current understanding of nutrition is much more sophisticated that it was even 20 years ago. Research into the health benefits of eggs is at an all-time high, and even mainstream media sources are starting to re-assess their long-held prejudices against high-fat whole foods. Let’s hope that, within the next few years, eggs will be allowed to reclaim their throne atop the food pyramid.

Why Are Eggs Good for You?

According to NutritionData, one large chicken egg is:

An excellent source of protein, choline, riboflavin, selenium, phosphorus and vitamin B2
A good source of preformed vitamin A, pantothenic acid and folate
A minor source of calcium, iron, vitamin E, thiamin, vitamin B6, potassium and zinc

While I wouldn’t consider eggs a “perfect food,” since that implies that they single-handedly provide all the nutrients we need to function properly (they don’t), eggs are definitely one of the most nutritious foods in the Standard American Diet.

Frankly, I can do little but shake my head whenever I’m reminded that the 1950s American establishment encouraged the public to favor “heart-healthy” cereal with skim milk over “artery-clogging” eggs for breakfast. How many people’s bodies were damaged by that one piece of advice alone? Alas, that is the power of quack science.

So, let’s find out what real science tells us about eggs. 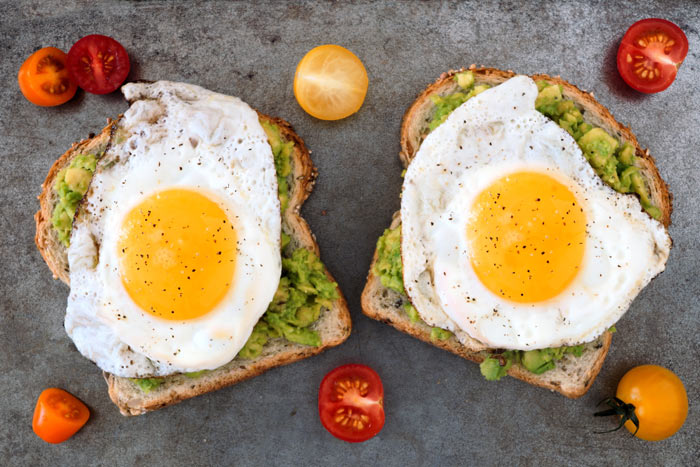 Eggs were never your enemy. That toast, on the other hand…

Research into the Health Benefits of Eggs

Egg yolks are one of the world’s greatest natural sources of choline, a B vitamin that the Institute of Medicine officially recognized as an essential nutrient in 1998. Choline’s role in the body is complex, and we have not learned all there is to know about this somewhat obscure vitamin.

However, researchers have ascertained that choline aids neurotransmitter synthesis, cell-membrane signaling and lipid transport, and also helps build cell membranes (1). This means that, along with various other functions, choline plays an important role in brain development.

A study featured in The American Journal of Clinical Nutrition, for example, found that regular choline intake was associated with improved verbal memory, visual memory and other cognitive performance factors (2).
Another study, published in the Journal of the American College of Nutrition, found that baby rats that received choline supplements (either in utero or within the second week of being born) experienced a permanent boost in memory throughout their lives (3).

Consequently, everyone will benefit from adding more choline-rich whole foods like eggs to their diets. Pregnant mothers are especially encouraged to eat more eggs, since they aid the mental development of their child.

Many processed foods contain a natural fat emulsifier called lecithin, which contains choline. Though lecithin can be sourced from liver, red meat and legumes, the highest-quality lecithin tends to come from egg yolks (the term “lecithin” is actually derived from the Greek word for egg yolks, “lekithos”).

While using lecithin as a food additive has helped reduce worldwide incidences of choline deficiency, obtaining our choline from whole foods like eggs is infinitely preferable to eating lecithin-containing processed foods… hopefully I don’t need to explain why!

Everyone knows that eggs are packed with cell-building protein. What many of us don’t realize, however, is that the quality of egg protein is so high that researchers sometimes use eggs as the gold standard for measuring the protein quality of other foods.

Unlike most plant proteins, egg protein contains the nine essential amino acids that our bodies cannot make themselves, making it a “complete” protein source. Furthermore, egg protein has a perfect score of 1.0 on the Protein Digestibility Corrected Amino Acid Index, meaning it is easy for our bodies to digest (4). 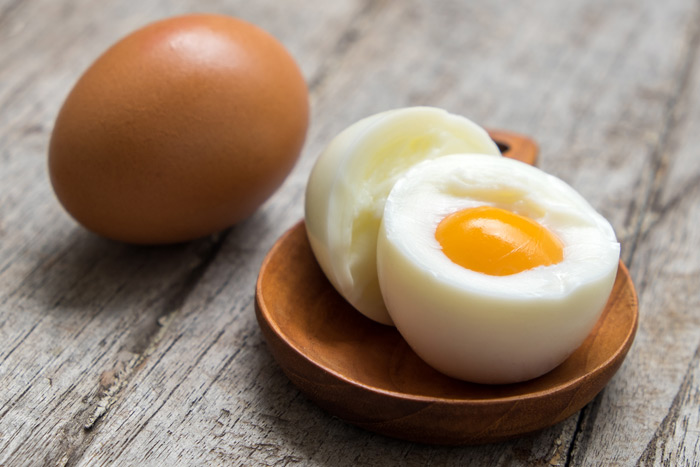 It’s also worth noting that, due to their high protein content, eggs scored 150% on Dr. Susanna Holt’s Satiety Index, meaning they are more filling than most breakfast cereals and junk carbohydrate foods like white pasta and bread (5). This fact, coupled with their low calorie content and glycemic load of 0, makes eggs an effective weight loss food.

High in Vision-Enhancing Lutein and Zeaxanthin

Most people in the West suffer from fading eyesight as they age. Though insufficient eye exercise (caused by staring at television and computer screens for unhealthily long periods) is a major contributor to this problem, poor diets deserve equal or greater blame. A diet rich in processed foods simply will not contain the important antioxidants required to keep our eyes healthy.

As it happens, egg yolks are fantastic bioavailable sources of lutein and zeaxanthin – two of the most important antioxidants for maintaining and improving visual function. Check out what some researchers have discovered about these amazing carotenoids:

Lutein and zeaxanthin’s ability to prevent and treat age-related macular degeneration and cataracts is significant, since these two conditions are the leading causes of vision loss among Westerners aged 40 or over. Cataracts (a clouding of the lens) are especially problematic, being the principle cause of blindness worldwide.

So, how many eggs do we need to eat to reap the benefits of their eye-boosting compounds? According to a study in the American Journal of Clinical Nutrition, eating just 1.3 egg yolks daily for 4.5 weeks boosted plasma levels of lutein by 28-50% and zeaxanthin by 114-142% (percentages depended on diets) (12). 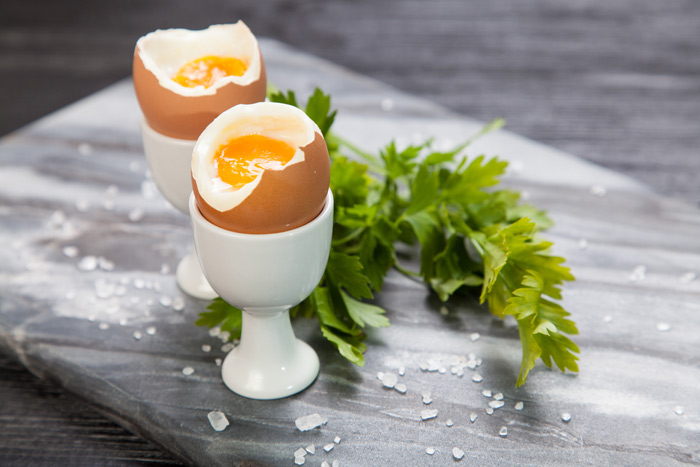 Therefore, eating just one or two eggs for breakfast will go a long way towards preventing age-related eye conditions. Adding other lutein- and zeaxanthin-rich foods to our diets, such as leafy green vegetables, will lend additional protection.

Omega-3-containing seeds, such as flaxseed, are sometimes added to the diets of hens to increase the omega-3 fatty acid content of their eggs’ yolks. While the intentions behind these “omega-3 enriched eggs” are positive, the alpha-Linolenic acid (ALA) in these seeds is a vastly inferior source of omega-3 than the eicosapentaenoic acid (EPA) and docosahexaenoic acid (DHA) in fish oil.

So, instead of wasting money on omega-3 enriched eggs, I encourage you to simply purchase regular eggs along with fish oil supplements. Why favor an inferior source of essential nutrients simply out of convenience?

The main reason why eggs were demonized in 1950s America was because people believed that their fat content raised cholesterol, thus triggering heart disease.

While it is true that eggs are high in cholesterol (one eggs provides more than half of our DV), we now understand that dietary cholesterol doesn’t raise blood cholesterol in most people (13).

So, eggs aren’t the artery-clogging food scientists once believed them to be. That’s good, right?

But wait, it gets better… 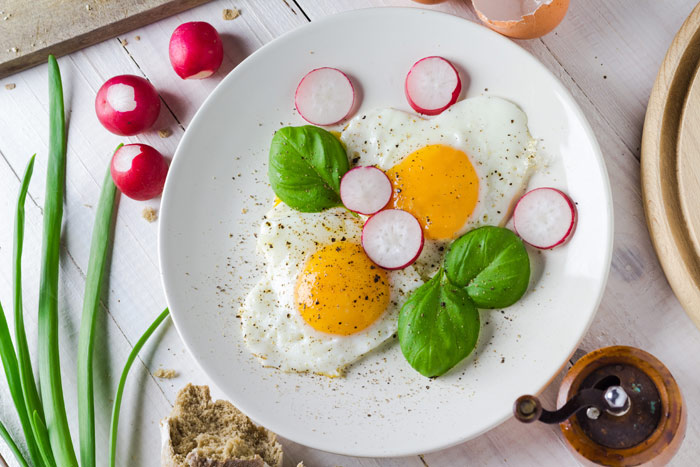 Here’s what contemporary research has found:

Six weeks of increased egg consumption in healthy men and women raised blood levels of HDL cholesterol by 10% (14).
When combined with carbohydrate restriction, daily egg consumption improved lipoprotein profiles and insulin sensitivity in subjects with metabolic syndrome (15).
Overweight and obese men who ate three eggs per day as part of a low carb diet exhibited increased plasma HDL levels and a decrease in risk factors associated with metabolic syndrome (16).
Healthy adults who added an additional egg to their diets for 12 weeks experienced a significant increase in HDL cholesterol and a moderate decrease in total cholesterol. (17).

So, there you have it: Eating eggs decreases the risk of cardiovascular disease by stabilizing blood cholesterol levels – the exact opposite of what people used to believe. Of course, this conclusion shouldn’t be difficult to grasp for people with common sense. Why would a natural whole food, that contains all the nutrients needed to grow a baby chicken, be bad for our heart? 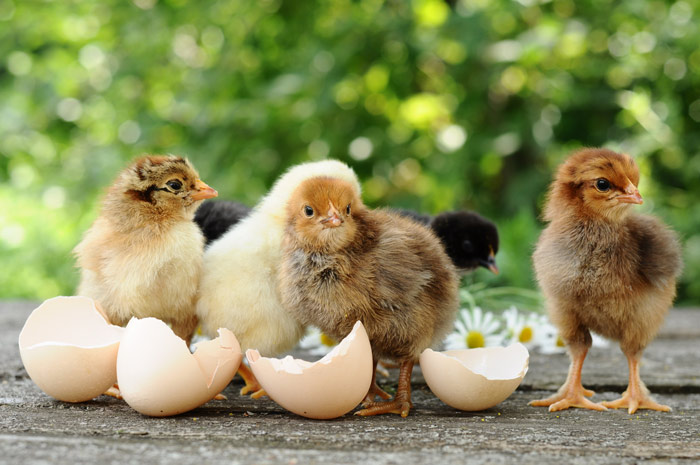 These chicks look pretty healthy to me

Some people are scared of eating too many eggs because they contain arachidonic acid, a polyunsaturated omega-6 fatty acid with pro-inflammatory properties. Like virtually everything negative printed about eggs, however, this hysteria is unfounded.

In reality, eggs only contain small amounts of arachidonic acid, and it is well-tolerated by our bodies. In fact, arachidonic acid is one of the most abundant fatty acids in the brain and plays a role in early neurological development, which is why human breast milk also contains it.

Which Eggs are the Best to Purchase?

To meet the USDA’s “free range” classification, producers must simply allow their hens outdoor access, no matter how limited that access might be (or whether the hens choose to use it in the first place). To meet the USDA’s much stricter “organic” classification, however, producers must allow “access to pasture,” which includes “access to the outside, direct sunlight, fresh air and freedom of movement” (18).

No prizes for guessing which producers produce the healthiest eggs from the happiest hens! 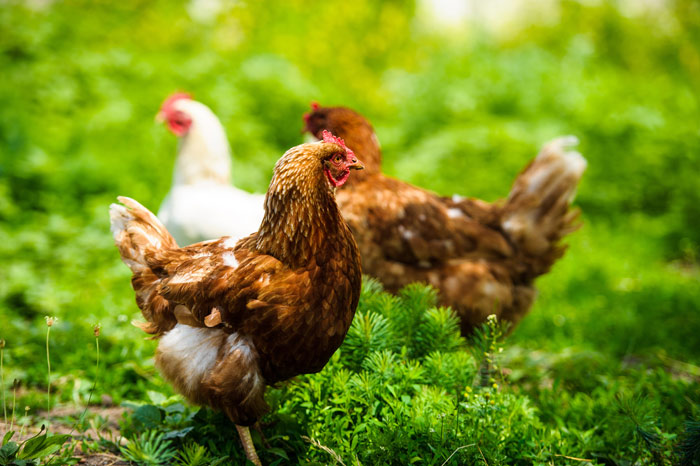 Can Eggs be Eaten Raw?

I advise against eating raw eggs from non-organic sources. Conventional egg farms are much likelier to be unsanitary than organic farms, so their eggs have increased risks of Salmonella.

High-quality eggs from organic farms, however, can be eaten raw. Even so… I still wouldn’t recommend it. A study published in The Journal of Nutrition found that the digestibility of egg protein is significantly improved when the egg is cooked (19). Additionally, raw eggs contain a protein called avidin that can, over time, deactivate the essential B vitamin biotin and lead to a deficiency in it.

While it’s true that eggs lose some nutrients and antioxidants when cooked, that’s the case with almost all whole foods. Nonetheless, most of us still have an inherent preference for cooked food… and our bodies always know best. 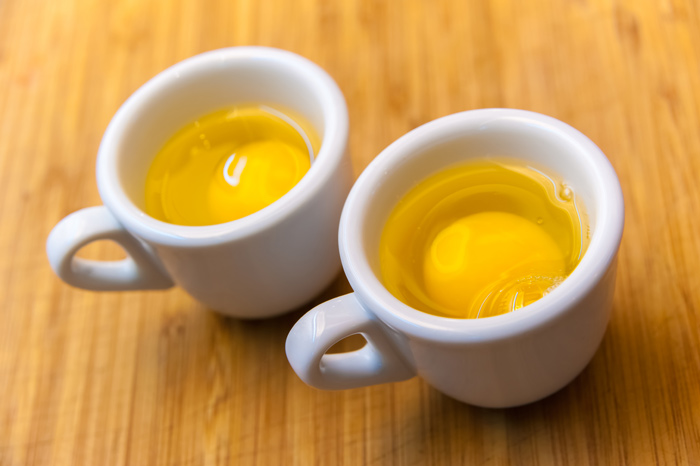