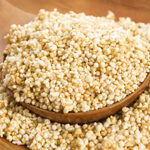 Amaranth is a broad-leafed plant that is native to the southern half of North America. It is part of the Amaranthaceae family of flowering plants, which also includes beets, Swiss chard, spinach, and quinoa, and is characterized by its rapid growing speed and competitive nature. In fact, amaranth is so aggressive that many American gardeners regard it as nothing more than a noxious weed that does little but threaten the livelihood of other, less invasive plants.

This is unfortunate, since amaranth is actually highly nutritious. The plant’s grain-like seeds were a significant source of essential nutrients for the American Indians, and they remain a popular food in Mexico and South America. This article sheds some light on the health benefits of this somewhat misunderstood plant.

Complete protein source – Depending on its quality, amaranth is comprised of between 13 and 19 percent protein, which is more protein per weight than cereals such as rice, sorghum, and rye. Significantly, this protein also contains all eight essential amino acids (including lysine, an amino acid missing from most grains), making it an excellent complete protein source for vegetarians and vegans. Though most people are aware that protein aids the growth and repair of cells, it also sends signals around the body, facilitates substance transportation, and much more. Without it, we would literally fall apart.

Gluten-free – Like quinoa and buckwheat, amaranth is naturally gluten-free. While individuals with gluten intolerance and celiac disease will appreciate this news the most, growing evidence suggests that gluten could be bad for everyone – even those of us without an overt sensitivity. According to Dr. Alessio Fasano, gluten activates a protein called zonulin that makes up the seal between our intestinal cells, triggering an immune response. Gluten also contains phytic acid, a compound that renders many important minerals, such as magnesium, bio-unavailable. With amaranth, however, we don’t need to worry about these serious issues.

Cardiovascular benefits – Though studies into amaranth are limited, emerging research suggests that it can benefit our cardiovascular system. A study published in Lipids in Health and Disease in January 2007, for instance, found that amaranth oil could benefit patients with coronary heart disease. A more recent study, published in Proteome Science in May 2014, also found that amaranth could potentially treat atherosclerosis, or narrowing of the arteries.

Rich in dietary fiber – According to Self‘s “NutritionData,” one cup of cooked amaranth provides us with 5.2 grams of dietary fiber, or 21 percent of our recommended daily intake (RDI). Most of this fiber is the insoluble kind, which passes through the gastrointestinal tract intact and triggers a laxative effect. However, amaranth also contains a lot of soluble fiber, which attracts water, slows digestion, and is known to produce cholesterol-lowering benefits. Consequently, amaranth is suitable for a weight loss diet.

Amaranth is commonly consumed in seed, flour, and oil form. Though it is known to be resistant to Monsanto’s glyphosate herbicide, it’s always a good idea to purchase organic amaranth products whenever possible for peace of mind.