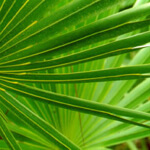 Saw palmetto (Serenoa repens) is a small palm native to the southeastern United States that is characterized by its sprawling trunk and large, spear-like leaves. The plant bears dark red, olive-sized berries that have a long history of use as both a food and medicine. The American Indians particularly revered saw palmetto berries for their significant healing properties.

Though saw palmetto has been used throughout history to treat coughs and colds, asthma, migraines, bronchitis, and pelvic pain syndrome, it is best-known for treating hair loss, enlarged prostates, and urinary tract infections.

There’s a good reason why so many hair products contain saw palmetto extracts: these humble round fruits really do benefit our hair, and seem to be especially effective at treating androgenic alopecia, or male- and female-pattern baldness. For example, a study published in the Journal of Alternative and Complementary Medicine in April 2002 found that 60 percent of the male subjects dosed with an active formulation (of which saw palmetto was a main ingredient) exhibited improved hair growth.

Though researchers don’t entirely understand how saw palmetto works in this regard just yet, some research – such as that contained in the Journal of Herbal Pharmacotherapy in 2005 – suggests that saw palmetto functions as a 5-alpha-reductase inhibitor. 5-alpha-reductase is an enzyme that converts testosterone to DHT, which is the molecule responsible for hair loss.

Numerous studies show that saw palmetto is effective at treating benign prostatic hyperplasia (BPH), which is commonly known as an enlarged prostate. For example, a study published in The Cochrane Database of Systematic Reviews found that saw palmetto “produced similar improvement in urinary symptoms and flow compared to finasteride [a synthetic drug used to treat BPH] and is associated with fewer adverse treatment events.” Additionally, a review featured in Drugs & Aging concluded that saw palmetto “is well tolerated and has greater efficacy than placebo and similar efficacy to finasteride in improving symptoms in men with BPH.”

Since saw palmetto is a strong diuretic, it shouldn’t be a surprise that it can also help treat urinary tract infections (UTIs). For example, a six-month study published in Urology discovered that saw palmetto could improve symptoms for men with UTIs compared to the placebo. The researchers also noted, however, that saw palmetto did not have a significant impact on urinary flow rates or sexual function.

Saw palmetto is non-toxic and can be purchased as dried berries, powdered capsules, liquid tinctures, and tablets. While it can be consumed in tea form, its active ingredients (fatty acids) are not water soluble, so the tea might not be effective at treating the conditions listed above.