Pork: The Good and Bad About This Controversial Meat

Due to its adaptable diet and independent nature, the pig is one of the oldest and most popular forms of livestock. Indeed, pigs were domesticated as far back as 5000 BC in Asia (much earlier than cattle and other ruminants), and have traveled across the world with humans. The famous Italian explorer Christopher Columbus, for example, brought eight pigs with him on his voyage to Cuba in 1493. 46 years later, Hernando de Soto landed in Tampa Bay, Florida with 13 pigs – and the North American pork industry was born.

Despite its popularity, however, pork consumption is not without its controversies. Pigs are notorious for eating anything, and this undiscriminating diet – coupled with their inability to sweat or detoxify – makes them more susceptible to parasites than other domesticated animals. Heck, when all three of the Abrahamic religions actually agree upon something (that pigs are unclean), it’s understandable that some people might sit upright and question whether those juicy sausages are doing more harm than good. 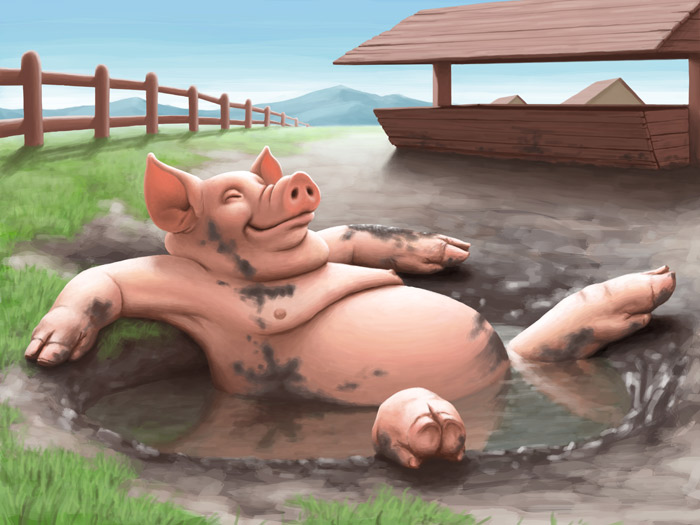 It might be hard to believe, but some people consider pigs to be dirty

So, should we eat pork, or not?

Ultimately, there are more negatives than positives associated with consuming pork, so my answer would be “no.” I avoid eating pork and I don’t recommend it to other people who have access to cleaner meat, such as beef and lamb.

In the interest of being balanced, however, this article takes a look at both the good and bad aspects of consuming pork. Since it’s a nice sunny day outside, and I don’t feel like writing about aggressive parasites at the moment, we’ll start with the good aspects first.

Pigs are highly intelligent animals, and are widely considered to be smarter than dogs, some primates, and even 3-year-old human children. Aside from having excellent long-term memories, pigs can learn complex combinations of symbols for actions and objects, as well as simple symbolic languages. They are also highly sociable and tend to live in complex social communities that encourage co-operation and mutual learning.

Vitamins and Minerals in Pork

According to NutritionData, 100 grams of fresh pork is:

An excellent source of protein, selenium, riboflavin, niacin, zinc, thiamin and vitamin B6
A good source of vitamin B12, phosphorus, pantothenic acid and potassium
A minor source of iron, magnesium and copper

Since the nutritional profile of pork depends on the quality of the meat and the environment in which the pig is raised, I would take this data with a grain of salt. Assuming it is mostly accurate, though, the results are clear: pork is packed with good things.

While pork might not contain as much protein as chicken, as much vitamin B12 as lamb or as much zinc as beef, it remains the best overall B complex. Pork also contains almost twice as much selenium (a cancer-fighting antioxidant) as beef, which is pretty impressive. 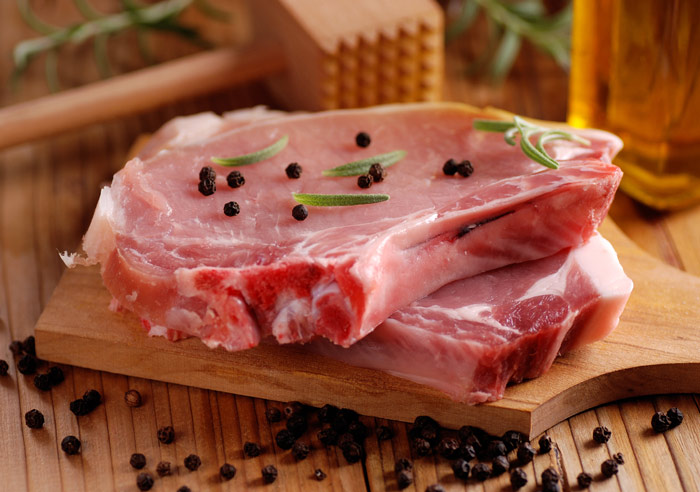 Pork contains more B vitamins and selenium than most other meats

Research into the Health Benefits of Pork

100 grams of fresh pork provides us with approximately 35% of our daily value (DV) of protein, which is far more protein than is obtainable from most plant-based sources. Furthermore, pork protein is a complete protein, meaning it contains all 9 essential amino acids required for proper cell and muscle growth.

Unsurprisingly, numerous benefits are associated with adequate protein consumption. For example, check out what the following studies discovered:

Protein ingestion increased satiety, thermogenesis (heat production) and the maintenance of fat-free mass in human participants. As such, protein can discourage overeating and improve our metabolic profiles, ultimately resulting in weight loss (1).
Protein (as well as monounsaturated fat) lowered blood pressure, improved lipid levels and reduced estimated cardiovascular risk in adults with prehypertension or stage 1 hypertension. Carbohydrates, on the other hand, had the opposite effect (2).
Adequate protein consumption improved bone health in participants, while protein deficiencies were linked to bone homeostasis and osteoporotic fractures (3).
Protein supplements improved muscle mass and performance in physically active participants. The researchers also noted that protein supplementation could “accelerate gains in both aerobic and anaerobic power” (4).
Healthy, overweight and obese participants who replaced dietary carbohydrates with protein over a six-month study period exhibited increased weight loss when compared to the control group (5).
Protein improved satiety in overweight and obese men, leading to a lower late-night desire to eat and a reduced overall preoccupation with food (6). 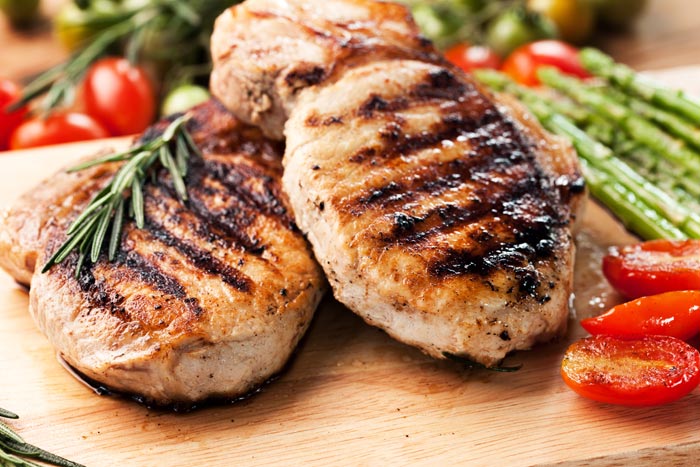 You can practically see the protein, can’t you?

According to a study published in the journal Nutrients in 2012, overweight and obese volunteers who favored the consumption of lean pork over other meats experienced improved body composition, including significant reductions in body mass index (BMI), waist circumference, body fat percentage and abdominal fat. The researchers ascribed these impressive results to subtle differences in energy balance, but admitted that more research needed to be conducted on the subject (7).

I’m not convinced that pork is “better” than other meats at improving body composition, since most meats contain similar levels of protein, saturated fat, cholesterol and calories (i.e., the traditional markers of potential weight gain/loss). That said, substituting carbohydrates and processed foods for paleo-friendly whole foods, such as pork, can do wonders for people trying to lose excess body fat. 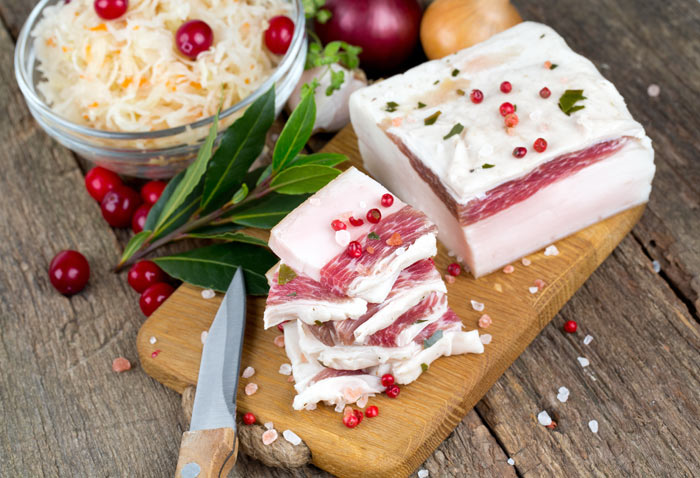 Pig fat, or lard, is one of the few cooking aids that doesn’t produce harmful trans fats

Pork is packed with several bioactive substances (including some substances only found in meat products) that are renowned for their health-boosting properties. These include:

Taurine – A sulfur-containing amino acid and building block of protein, taurine is found in large amounts in our heart, brain, retina and blood platelets. Normal taurine concentrations strengthen heart muscle cells, prevent liver disease, protect the retinal and inner ear cells from damage, and even prevent the onset of type 2 diabetes (8).
Creatine – Beloved by bodybuilders, creatine is an organic acid produced by the liver to help supply ATP (energy) to all of our body’s cells, including muscle cells. Aside from improving athletic performance, creatine treats inflammation, improves brain function, guards us from serious neurodegenerative conditions like Alzheimer’s disease, and even increases longevity (9).
Glutathione – Glutathione is a potent antioxidant that shields our bodies from oxidative and peroxidative damage associated with unrestrained free radical activity. Unlike other antioxidants, however, glutathione is intracellular, meaning it can maximize the scavenging activities of other antioxidants as well. Consequently, glutathione is often nicknamed the “master antioxidant.” Quite important, this one (10).

… And remember, there are lots of bioactive substances present in pork (and other meats) that remain undiscovered by science. For all we know, these substances could be the tip of a very large iceberg. 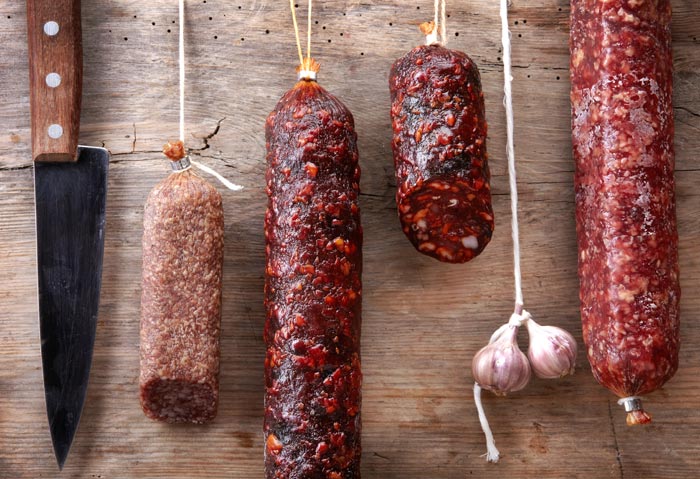 Unfortunately, processed pork products like salami are not as nutritious as fresh pork cuts

Now that we’ve discussed the health benefits of pork, let’s take a look at the more unpleasant aspects of it. Be warned: strong stomachs are advised from this point onward.

As mentioned in the introduction, pigs are notorious for eating anything – whether it be rotten meat, maggot-infested carcasses, feces, urine or cancerous growths. Worse still, pigs only take four hours to digest their foul food (unlike ruminant animals, such as cows and sheep, which take up to 24 hours to digest their vegetarian food), meaning that most toxins and impurities remain within the pig indefinitely.

Consequently, pigs’ bodies are breeding grounds for harmful organism, including parasites that can transfer to humans. These include:

Trichinella spiralis – A small nematode parasite responsible for the disease trichinosis. Though most instances of trichinosis either have minor or no symptoms, high infestations can promote nausea, heartburn, diarrhea and indigestion.
Taenia solium – Also called the pork tapeworm, Taenia solium is an intestinal parasite characterized by its flat, ribbon-like body and ability to grow to up to eight meters (!) in length. Like regular tapeworms, pork tapeworms steal valuable nutrients from our food, often leading to persistent hunger and fatigue. In extreme cases, intestinal irritation, anemia and emaciation occur.
Toxoplasma gondii – A parasitic protozoa capable of infecting all warm-blooded animals. Though a Toxoplasma gondii infection rarely produces noticeable symptoms in healthy humans, it can prove fatal for people with weakened immunity (11). 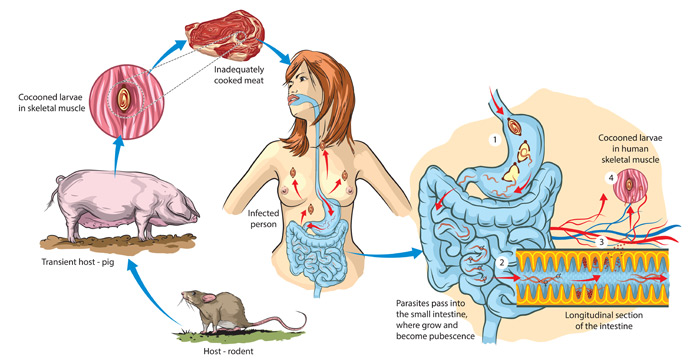 Consumption of pork can also lead to several viruses in humans, including:

Hepatitis E – A virus that can cause abdominal pain, fatigue, jaundice, fever, nausea, vomiting, aching joints and muscles, and other unpleasant symptoms. Sometimes it affects the nervous system, resulting in severe pain in the arms and legs.
Nipah – This newly-discovered virus reached headlines in 1999, when it killed 103 Malaysian people who came into close contact with infected pigs. Outbreaks of the virus are still an annual occurrence in Bangladesh, but it hasn’t reached the West yet.
Influenza – Pig influenza, better-known as swine flu, is an infection caused by certain types of swine influenza viruses. Like regular influenza, it produces symptoms like fever, lethargy, decreased appetite and difficulty breathing. In extreme cases, it can cause deaths related to respiratory failure, pneumonia and kidney failure (12).

Defenders of pork love to claim that these parasites and viruses are caused by eating undercooked meat, and that all of these problems can be averted if we cook our food properly. However, this isn’t entirely true.

The sad fact is that there is no temperature at which pork can be cooked to guarantee that all these harmful organisms and their eggs are killed. Even freezing the meat doesn’t ensure that all organisms, especially certain species of worm, are killed. This is not the case with beef, lamb and other “clean” meats, which simply need to be frozen and/or cooked properly to become parasite-free (assuming they have parasites in the first place).

Incidentally, even if you do manage to kill the parasites in pork…. what does that mean? You’re eating dead parasites and their eggs! 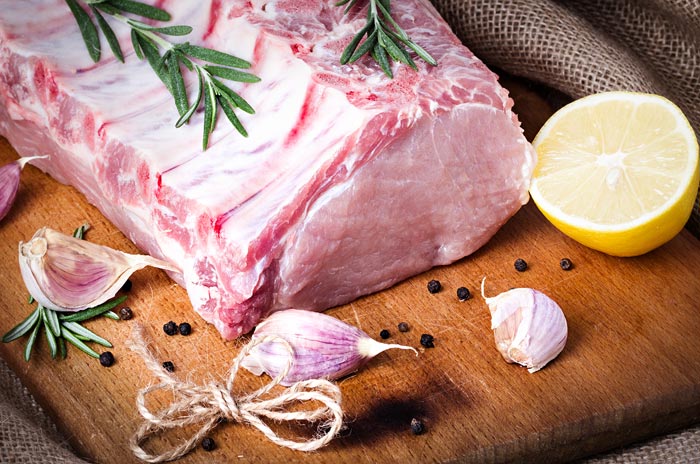 If you insist on eating it, though, then it is absolutely essential that you purchase the meat of pigs raised in sustainable, organic certified farms. While pigs raised in cleaner and healthier environments will still be pigs (i.e., natural scavengers that eat their siblings’ poop and don’t think twice about rolling in the mud to keep cool), there’s a much greater chance that their meat contains fewer parasites and viruses than that of their caged counterparts. 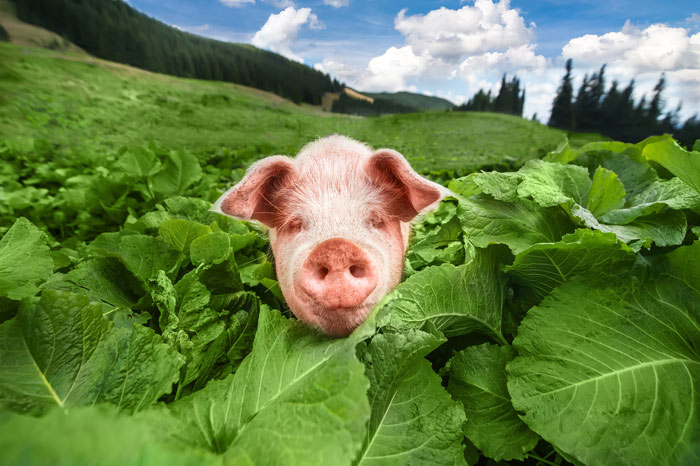 Raw pork can be stored in the refrigerator at 40°F or lower for several days, depending on the type of cut and the freshness of the meat when purchased. Generally speaking, pork chops, roasts and steaks last 3-4 days in the fridge, while ground pork and sausages last for around 2 days. If you don’t plan to cook your pork products within this time, freeze them as soon as possible to maintain quality.

Pork products are usually barbecued, fried or heated in the oven. If you choose the latter two options, then I recommend cooking the pork at medium heat (180°C/350°F) for the first half of the process, to ensure a thorough cooking on the inside, then at high heat (200°C/400°F) for the second half to boost crispiness and remove most harmful organisms. Most pork products, such as chops, sausages and steaks, are done when they are white on the inside and the juices run clear. Bacon tends to become crisp (rather than flat) when done. 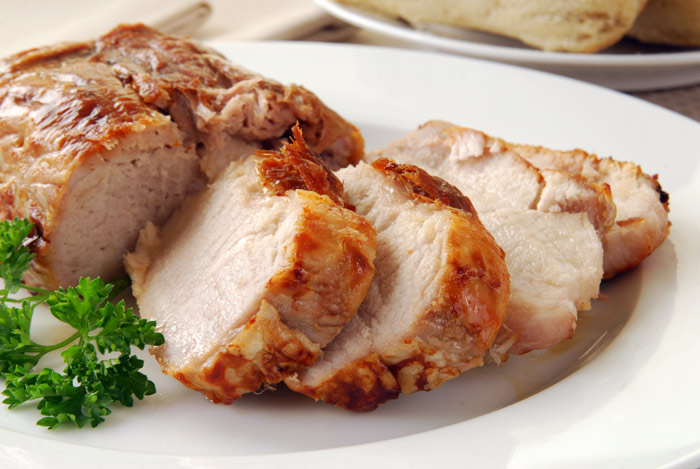 This roast pork appears to be done. Come to think of it, so is this article