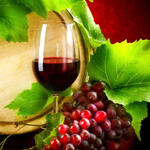 Moderate consumption of red wine is well-known for producing a number of health benefits. For example, recent studies have shown that red wine contains compounds that can protect membranes from oxidation, prevent several types of cancer and even treat depression and low moods. Earlier studies have also found that this much-loved alcoholic beverage, which is made from dark-colored grape varieties, can boost our cardiovascular system and protect us from heart disease.

However, a new study published in the European Journal of Nutrition has given us another reason to love red wine. According to the researchers, the red grapes from which red wine is made can also lower blood pressure, suggesting that it can help treat hypertension – one of the Western world’s biggest “silent killers.”

For the study, 40 male rats were fed for five weeks with either a high fructose diet, or a high-fructose diet that was – in the final two weeks – supplemented with different doses (200, 400, and 800 mg/kg/ body weight/day) of cultured red grape berry cells. The researchers measured the rats’ blood pressure, insulin, plasma triglycerides, and adiponectin levels at the start of the trial, and after three and five weeks of diet. They also monitored the red grape cells’ effects on vasodilatation (the widening of blood vessels).

The researchers found that blood pressure, insulin, plasma triglycerides, and adiponectin levels had “increased significantly” in the rats fed a high-fructose diet. While the rats in the second group also experienced raised levels in the same areas, the red grape cell supplements helped stabilize them. Additionally, they experienced a positive effect on vasodilatation. The researchers concluded that the grape cells “decreased [blood pressure] and improved metabolic parameters. These beneficial effects may be mediated by the cell constituents, highly rich with polyphenols and resveratrol, reside in their natural state.”

One of the compounds mentioned in the researchers’ concluding statement, resveratrol, deserves particular emphasis since it is responsible for so many of red wine’s health benefits. This natural phenol, which is often sold as an individual health supplement, is commonly found in red grapes and has been shown to reduce LDL cholesterol, trigger cancer cell death, prevent insulin resistance, and reduce inflammation. Some researchers even believe that resveratrol is a key to longevity (red wine is regularly consumed in the Mediterranean, where people live longer lives than elsewhere in Europe). So, drink up!