Quinoa: Gluten-Free and Packed with Protein 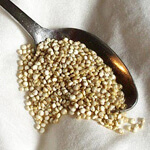 Quinoa is a grain crop native to the Andean Mountains of South America. Although the leaves of the plant can be consumed as a leaf vegetable, quinoa is primarily grown for its seeds. These seeds, which are cooked in a similar way to rice, come in three colors (red, white, and black) and are much-loved for their significant health benefits. In fact, 2013 was crowned “The International Year of Quinoa” by the United Nations due to quinoa’s high nutritional value and potential to contribute to global food security.

A complete protein source – One of quinoa’s biggest draws, particularly for vegetarians and vegans, is its considerable protein content. According to Self‘s “NutritionData,” one cup of cooked quinoa contains 16 percent of our recommended daily intake (RDI) of protein. Moreover, this protein contains all eight essential amino acids, making quinoa a rare example of a plant-based complete protein source (most plant foods are deficient in some amino acids, such as lysine). Protein, of course, aids the growth and repair of cells, supplies energy to our bodies and much more.

Packed with fiber – One cup of cooked quinoa also contains a whopping 21 percent of our RDI of fiber, which is twice as much fiber as most other grains. Most of quinoa’s fiber is the insoluble kind that contains the well-known laxative effect, but it also contains smaller amounts of insoluble fiber that forms a gel in the stomach, thereby slowing digestion, encouraging a feeling of fullness, and reducing LDL cholesterol in the bloodstream. This well-rounded fiber profile gives quinoa a low glycemic load of 53, making it a suitable food for diabetics and pre-diabetics.

High in antioxidants – A study published in the Journal of Medicinal Food in August 2009 showed that of the 10 Andean grains analyzed by the researchers (five cereals, three pseudocereals, and two legumes), quinoa contained the most antioxidants out of all of them. Another 2009 study published in Food Chemistry showed that allowing quinoa seeds to sprout could increase their antioxidant content further. Antioxidant-rich foods are well-known for their anti-aging properties and ability to prevent degenerative diseases such as cancer, rheumatoid arthritis, macular degeneration, and Alzheimer’s disease.

Rich in quercetin and kaempferol – Quinoa is an excellent source of the flavonoids quercetin and kaempferol, which are shown to possess anti-inflammatory, anti-viral, and anti-cancer effects. A study published in Neuropharmacology in 2010 even found that flavonoids contained anti-depressant properties, suggesting that flavonoid-rich foods like quinoa could provide treatment for depression, anxiety, and other low moods.

Gluten-free – According to a survey published by The NPD Group in 2013, approximately one-third of the United States population are trying to minimize or avoid gluten due to health concerns. Fortunately for this growing minority, quinoa is naturally gluten-free and is a safe food for those with gluten intolerance or celiac disease. Moreover, unlike many processed “gluten-free” foods, quinoa is a whole food that is free from additives and other undesirable ingredients.

Bursting with nutrients – Quinoa is an excellent source of essential nutrients such as calcium, iron, phosphorus, manganese, copper, selenium, and most B vitamins. One cup of quinoa also supplies us with an impressive 30 percent of our RDI of magnesium, in which up to an estimated 80 percent of the American population are deficient.

Organic quinoa is easily found online or in health food stores. It only takes between 15 and 20 minutes to cook, has a pleasant, nutty flavor, and is easy to incorporate into both cooked and cold meals.