Propolis: The Bee Glue That’s Good for You 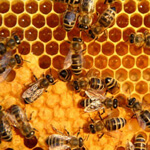 Propolis, also called bee glue, is a sticky, brown mixture that honey bees make from their saliva and the resin of tree bark for repairing damage to their hive and sealing it from invaders. Unlike beeswax, which is used to seal larger open spaces, bees tend to reserve propolis for smaller gaps. Europeans have treasured the mixture for centuries for its medicinal properties, though its popularity is slowing growing in North America as well.

Propolis is found in honey, and it is one of the ingredients that give honey its healing properties. Propolis alone, however, is equally nutritious; so much so, in fact, that it is used as a dietary supplement in its own right.

Cancer-fighting abilities – According to a study published in the February 2004 edition of the American Journal of Biochemistry and Biotechnology, propolis contains therapeutic compounds that can kill MCF-7, a breast carcinoma cell. After being given a propolis extract, 13 percent of the cancer cells present in the volunteers were eliminated in 24 hours. A later study published in the November edition of BMC Complementary and Alternative Medicine also found that Chinese red propolis (as well as other bee products like bee pollen and royal jelly) could inhibit the cancer-causing vascular endothelial growth factor.

Powerful anti-inflammatory – A study published in the June 2008 edition of European Journal of Pharmacology showed that Brazilian propolis contains a component called Artipillin C, which possesses considerable anti-inflammatory properties and helps to heal wounds. Additional research has shown that propolis can be applied topically, like a cream, to treat skin inflammations.

Antioxidant activity – A study published in the December 2004 edition of the Journal of Agricultural and Food Chemistry found that propolis sourced from a variety of countries contain flavonoid and polyphenolic components, which possess marked antioxidant activity. Antioxidants are, of course, needed to combat the cell-damaging activities of free radicals, which can trigger cancer and other degenerative diseases like macular degeneration if left unchecked. Additionally, eating antioxidant-rich foods such as propolis provides anti-aging benefits.

Immune-boosting properties – According to a study published in the August 2010 edition of Phytotherapy Research, propolis contains proteins and compounds that have the ability to alter and regulate the immune system, and which possess anti-bacterial and anti-viral benefits.

Anti-septic properties – Propolis has been utilized as an anti-septic ointment for centuries due to its numerous active ingredients such as phenolic acids, terpenes, and amino acids. Ancient cultures, including the Egyptians, also claimed that propolis and other bee products had the ability to accelerate the healing of wounds such as cuts, bruises, and canker sores. Modern science is now catching up with this ancient knowledge; a study published in the September/October 2009 edition of Wound Repair and Regeneration, for instance, proved that the topical application of propolis on rodents’ diabetes-based wound closures greatly accelerated the healing response.

Rich in vitamins and minerals – Propolis supplies our bodies with up to 60 trace minerals, including varying amounts of calcium, magnesium, iron, zinc, silica, potassium, phosphorous, copper, cobalt, as well as 16 amino acids. It also contains vitamin A (carotene) and vitamins B1, B2, and B3. For this reason, propolis is much better than any multivitamin tablet, which usually contain similar ingredients but in synthetic forms.

Evidently, a lot of studies have been done on propolis that have confirmed centuries-old wisdom. However, propolis has also been linked to other benefits that are either presently unconfirmed by studies, or hindered by tenuous evidence. These include its alleged ability to prevent the formation of dental plaque, and its ability to treat serious conditions such as tuberculosis and hepatitis without side effects.