Nutritional Yeast: A Great Source of Protein and B Vitamins 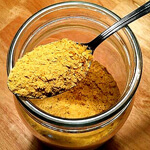 Nutritional yeast is a heat-deactivated yeast that is typically sourced from sugarcane and beet molasses. It has a cheese-like, nutty flavor, and can be incorporated into pizzas, creamed vegetables, popcorn, onion rings, mashed potatoes, fries, pasta, and various soups and salads. It is loved by vegetarians and vegans because it is a dairy and gluten-free source of numerous trace nutrients; indeed, the nutritional yeast found in health food stores is just as likely to be used as a health supplement as a cooking ingredient.

Rich in protein – Perhaps the biggest appeal of nutritional yeast, at least to people who avoid eating meat, is its incredibly high protein content. One 100 gram serving of it contains a whopping 50 grams of protein – more than 100 percent of an adult woman’s recommended daily intake (46 grams), and almost as much as an adult man’s recommended daily intake (56 grams). Moreover, this protein contains all eight essential amino acids, making it a “complete” protein. This makes the yeast comparable in the protein department to other plant foods with famously high protein contents such as spirulina, chlorella, soybeans, buckwheat, quinoa, and most sea vegetables. We need protein, of course, to build our muscles and cells and to produce hormones and enzymes.

Weight loss properties – 100 grams of nutritional yeast provide us with 25 grams of fiber, which is 100 percent of our RDI. Since fiber helps us absorb water from the large intestine, it makes us feel full for longer, which prevents us from overeating. This fact, combined with the yeast’s low calories content (281 calories per 100 grams) and minimal fat content, makes nutritional yeast a good supplement for people trying to lose weight.

Defense from free radicals – Nutritional yeast contains glutathione and selenium, two antioxidants that form glutathione peroxidase when combined, an enzyme that is a powerful scavenger of free radicals. A free radical is an oxygen molecule that has lost an electron, so tries to stabilize itself by stealing electrons from neighboring molecules; this creates havoc in the body and, if left unchecked, can lead to cancer and other serious degenerative diseases. Glutathione peroxidase can neutralize free radicals, thereby guarding us from their damage.

Anti-aging properties – Nutritional yeast is a good source of nucleotides, which are the building blocks of DNA and RNA. DNA is the genetic blueprint for all living organisms, and RNA is what carries the DNA instructions to our body’s cells. Consequently, the yeast provides us with many benefits associated with healthy cells, including improved energy and skin, protection from hair loss and macular degeneration, reversal of heart disease, and the elimination of brain fog.

B-vitamin complex – Nutritional yeast contains absolutely unbeatable levels of B-vitamins (in fact, it is riboflavin that gives the yeast its yellow color). 100 grams of it contain 60 milligrams of thiamin, riboflavin, and vitamin B6 (or 4000 percent, 3563 percent, and 3000 percent of our RDI of each, respectively), 350 milligrams of niacin (1750 percent), 1500 micrograms of folate (375 percent), 48.7 micrograms of vitamin B12 (812 percent), and 6.3 milligrams of pantothenic acid (63 percent). All of these vitamins play an important role in cell metabolism.

Immune-boosting properties – Research into the immune-stimulating properties of beta-glucans, a natural compound derived from the broken cell walls of oats, barley, fungus, and yeast, has been ongoing since the 1940s. Scientists have concluded that beta-glucans – found in nutritional yeast – activate macrophages, which are white blood cells that are our immune system’s initial line of defense against infections and tumor growth. This is another reason – including its aforementioned antioxidant content – why nutritional yeast is so good at guarding us from cancer and other serious diseases.

Nutritional yeast also contains respectable amounts of trace minerals such as zinc, iron, magnesium, chromium, copper, and manganese. It is also free of saturated fat, sodium, and cholesterol, and has a low estimated glycemic load of four, making it suitable for diabetic and prediabetic individuals.