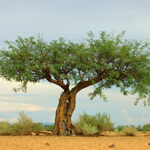 Mesquite is a deciduous tree that is native to the Americas, especially in the desert regions of northern Mexico, western South America, and southern United States. It is a sturdy, drought-tolerant tree that survives well in arid and semi-arid regions that receive little rainfall. Though it is considered a nuisance by ranchers because its roots often steal moisture from neighboring flora, the mesquite tree does have a saving grace: it produces highly nutritious seed pods which, in turn, make a flavorful flour that provides us with numerous health benefits.

Gluten-free – Like buckwheat flour and coconut flour, mesquite flour (also called mesquite powder and mesquite meal) is gluten-free. This is a big plus for everyone, not just for people with Celiac disease or gluten intolerance, because gluten consumption has been linked to brain fog, fatigue, headaches, depression, bloating, gas, and much more. Indeed, in his popular 2011 book Wheat Belly, Dr. William Davis proves that the gliadin protein contained in gluten polymers is a leading cause of weight gain. Therefore, we should welcome any substitutes to processed white flour, which is high in gluten.

Diabetic-friendly – Mesquite flour has a low glycemic index score of 25, which is in the same league as most fruits and vegetables. This means that it has little or no impact on blood sugar levels, largely because the source of its natural sweetness – fructose – doesn’t require insulin to be broken down. For this reason, mesquite flour is suitable for diabetic and prediabetic individuals.

High in protein – Mesquite flour is comprised of between 13 and 17 percent protein (depending on the quality), which is comparable to many famously protein-rich seeds such as sunflower seeds and sacha inchi seeds. Moreover, it is a “complete” protein, since it contains all eight essential amino acids. This makes the flour an excellent choice for bodybuilders, athletes, vegetarians, vegans, and anyone else who is seeking high-quality natural energy but doesn’t want to resort to refined carbohydrates.

Weight loss food – You can incorporate mesquite flour into a weight loss plan because, aside from being gluten-free and low in carbohydrates, it is also low in fat (three percent) and high in dietary fiber. Although fiber is best-known for improving regularity and treating constipation, it also encourages weight loss since it absorbs water from the large intestine, which helps us feel fuller for longer and discourages overeating.

Trace mineral content – Mesquite flour contains respectable levels of calcium (which is vital for maintaining healthy bones and teeth), and magnesium (which boosts hormone and heart health, and which helps us absorb calcium better). Additionally, it is rich in essential minerals like potassium, zinc, and iron, which keep our bodies functioning optimally.

Mesquite flour can add a nutritious punch to smoothies, milk-based drinks, and – thanks to its sweet, molasses-like taste – desserts such as cookies and cakes. Some people also like to sprinkle it atop their morning cereal. Its pleasant taste and aroma makes it versatile and suitable for experimentation, so use your imagination!