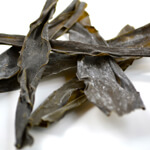 Kombu, also called dashima or haidai, is an edible brown seaweed that belongs to the Laminariaceae family. It is popular as a cooking ingredient in East Asia, especially among the Japanese, who use it to make dashi, a stock soup. Kombu is mainly harvested along the shores of Japan and Korea, and it is usually sold dried or pickled in vinegar. It is also used to make “kombucha,” a seaweed tea renowned for its rejuvenating properties.

Anti-clotting properties – According to a study published in Phytotherapy Research in April 2011, the Laminaria japonica kind of kombu (which is probably the most popular kind consumed today) contains impressive amounts of a polysaccharide fraction called PLG. PLG contains anti-clotting properties, meaning that it has the ability to delay blood clots without prolonging bleeding time.

Dietary fiber content – One ounce of kombu provides us with approximately seven grams of fiber. Fiber helps to absorb water from the intestinal tract, thereby encouraging a feeling of fullness. This, coupled with the fact that one ounce of kombu only contains 83 calories and negligible amounts of fat, means that kombu is an excellent weight loss food. Its fiber content also makes it an excellent natural laxative and a cure for constipation.

Protection from gamma radiation – According to a study published in Archives of Pharmaceutical Research in April 2011, kombu can protect leukemia cell lines from gamma radiation due to its fucoidan content. Fucoidan is a sulfated polysaccaride found in many species of brown algae.

High in calcium – One ounce of kombu provides us with approximately 12 percent of our recommended daily intake (RDI) of calcium, an essential mineral that promotes superior bone and tooth health. For this reason, kombu is an excellent source of calcium for vegans, lactose intolerants, and other individuals who wish to avoid dairy products.

Glutamic acid – Kombu is unusually rich in glutamic acid, an amino acid that can aid brain and muscle function, and improve prostate health. Most people receive their glutamic acid from meat and dairy sources, so kombu is a great alternative for vegetarians and vegans.

Rich in iodine – While kombu’s iodine levels vary depending on quality, it almost always contains above-average amounts of this absolutely essential mineral. A regular consumption of iodine is linked to improved thyroid function, improved metabolism, a greater ability to fight cancer, and numerous other health benefits. It is also a mineral in which many people are (unbeknownst to themselves) deficient.

Good source of iron – One ounce of kombu provides us with approximately 13 percent of our RDI of iron, an important mineral that helps create hemoglobin, which in turn carries oxygen from the lungs to the body’s cells. Iron deficiencies are an ongoing concern in today’s society, and can lead to anemia.

Aside from the nutrients mentioned above, kombu also contains various amounts of potassium, vitamins B, C, D, and E, magnesium, zinc, and even germanium, which possesses excellent skin healing properties.