Kefir: Lactose-Free and Rich in Probiotics 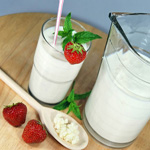 Kefir is a thick, yogurt-like drink made by fermenting milk with kefir grains. It originated in Russia and is characterized by its creamy texture, tart taste and fizzy effervescence. Kefir remains popular in Eastern Europe, where it is commonly used as an ingredient in baked goods such as sourdough bread, often as a substitute to buttermilk. Due to its high nutritional value, however, kefir shines most as a health supplement.

Please note that the benefits listed below apply to kefir sourced from animal milk. The nutritional profile of kefir made from plant milks (such as coconut milk) will differ, though the overall healthiness is maintained.

Rich in probiotics – According to an article on the website of the Cenegenics Medical Institute in Jacksonville, kefir contains between 7 and 10 billion colony-forming units of beneficial bacteria. Some of these bacteria, such as Leuconostoc, Lactobacillus caucasus, Torula kefir, and Saccharomyces kefir, cannot be found in yogurt, while the bacteria that kefir does share with yogurt are more potent in kefir.

These important microorganisms help improve digestive health, often by recolonizing the beneficial bacteria in our gastrointestinal systems and by preventing the growth of harmful bacteria in the intestinal tracts. Furthermore, these cultures can aid the production of vitamins B12 and K (which kefir contains).

Good source of protein – One cup of kefir made with whole milk contains approximately 10 grams of protein, including all eight essential amino acids. For this reason, a lot of bodybuilders like to add kefir to their pre-workout smoothies. It mixes especially well with blackstrap molasses, a nutritious sweetener that helps disguise kefir’s sourness.

Improves blood sugar levels – Like milk, kefir is low on the glycemic index (16) and can help regulate the amount of insulin produced by the pancreas. Moreover, low glycemic index foods like kefir have been linked to improve satiety and thus aid weight loss.

Rich in nutrients – Though kefir is primarily consumed for its probiotics and protein, it is also valued for its vitamins and minerals. One cup of kefir, for instance, contains 10 percent of our RDI of vitamin A, 25 percent of our RDI of vitamin D, 30 percent of our RDI of calcium, and 8 grams of fat (of which 5 are saturated). It also contains varying quantities of phosphorus, iron, magnesium, manganese, potassium, and copper. Consequently, long-term consumption of kefir has been linked to improved skin and hair, superior cardiovascular health and immunity, treatment of constipation, and the elimination of unhealthy food cravings.

Fortunately, kefir is really easy (and inexpensive) to make yourself! All you need is some kefir grains, a large jar and some good-quality milk. Then, follow the simple instructions outlined here.