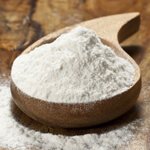 It is not difficult to find research proving that regular white flour is bad for us. Consuming foods made from this popular flour, which has been processed, bleached and stripped of all its essential nutrients, has been linked to cancer, brain fog, acne, constipation, and many other medical conditions. Moreover, due to its extraordinarily high glycemic load, white flour has significantly contributed toward the Western epidemic of diabetes and obesity.

Fortunately, there are a growing number of healthier alternatives to white flour on the market today. One of the best of these alternatives is buckwheat flour, a light-colored flour made from the seeds of the Asian buckwheat plant. As this article will show, there are many good reasons to start cooking with buckwheat flour, particularly if you suffer from a gluten intolerance.

Complete protein source – One cup of buckwheat flour supplies us with whopping 30 percent of our recommended daily intake (RDI) of protein. Furthermore, this protein is high quality: Buckwheat contains all eight essential amino acids (amino acids that our bodies can’t make themselves), making it a rare example of a plant-based “complete” protein source. This makes buckwheat flour a fantastic flour for vegetarians and vegans.

High in flavonoids – Buckwheat flour is a significant source of flavonoids, which are plant antioxidants that possess disease-fighting and anti-aging properties. One of the most significant flavonoids found in buckwheat flour is rutin, which is shown to inhibit the formation of blood clots and guard us from heart disease. Rutin also breaks down in the body to form quercetin and rutinose, two compounds that also benefit the cardiovascular system.

Gluten-free – The seeds of the buckwheat plant are naturally gluten-free, making buckwheat flour a perfect flour for people with gluten intolerance and celiac disease. However, some evidence suggests that gluten is bad for everyone, regardless of tolerance. According to celiac expert Dr. Alessio Fasano, gluten contains a protein called zonulin that can diminish the seal between our intestinal cells, causing intestinal leaks. Gluten is also rich in phytic acid, an indigestible compound that binds itself to nutrients, rendering them bio-unavailable. Therefore, adding more gluten-free foods to our diet, such as buckwheat flour, can benefit everyone in the long term.

Dense in nutrients – Buckwheat flour contains a surprisingly robust nutrient profile and is particularly rich in minerals such as iron, phosphorus, potassium, zinc, copper, and manganese. Moreover, one cup of buckwheat flour contains an impressive 75 percent of our RDI of magnesium, an essential mineral in which up to an estimated 80 percent of the United States population is deficient.

Organic buckwheat flour can be purchased online or in health food stores, and is primarily used to make baked goods such as bread, cakes, cookies, muffins, and pancakes. It also makes a great pasta due to its mild, earthy taste and pleasant, fine texture.