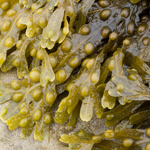 Bladderwrack, also called rockweed, black tang, red fucus, and various other names, is an edible brown seaweed that grows along the coasts of the Atlantic and Pacific oceans and the North and Baltic seas. Like many other seaweeds such as kelp, nori, and kombu, bladderwrack is beloved – especially in East Asia – for its medicinal properties. Indeed, it was the original source of iodine in Europe, and was used in the early nineteenth century to treat goiter, a swelling of the thyroid gland caused by an iodine deficiency.

Rich in iodine – Since bladderwrack was Europe’s original source of iodine, it makes sense to start by pointing out this seaweed’s incredible iodine content. Indeed, 50 grams of bladderwrack contain more than 100 percent of our recommended daily intake of this essential, thyroid-regulating mineral – more than any other seaweed. Moreover, the organic iodine present in bladderwrack is more easily absorbed than the inorganic form found in iodized salt and other iodine-enriched products.

Protection from radioactive iodine – Bladderwrack is able to protect the thyroid from absorbing cancer-causing radioactive iodine in the event of a nuclear disaster, such as the one that befell Fukushima in 2011. This is because the organic iodine found in the seaweed binds with, and fills, the thyroid gland’s receptors, thereby preventing radioactive iodine from doing the same. This should be viewed as a short-term solution, however, since excessive iodine consumption can lead to thyroid dysfunction.

High in fiber – All sea vegetables are great sources of soluble fiber, and bladderwrack is not an exception. Comprised of between 20 and 40 percent fiber (mostly in the form of alginic acid, mucilage, and fucoidan), bladderwrack is a great choice for people suffering from constipation, as well as a good weight loss food since its high fiber content (which helps you feel fuller for longer) is coupled with no fat and few calories. Moreover, soluble fiber also coats the digestive tract and protects it from damage by refluxed stomach acid. For this reason, bladderwrack extracts are often found in health supplements for heartburn treatment (heartburn being a symptom of acid reflux or GERD).

Zeaxanthin – One of the most interesting names in bladderwrack’s extensive list of trace minerals is zeaxanthin. Zeaxanthin is what gives the macula of our eyes its yellow color, and this natural carotenoid – also found in leafy green vegetables, fruits, and egg yolks – helps to guard the eye from oxidative and light-induced harm. A lack of zeaxathin (along with its fellow eye-based antioxidant, lutein) can lead to macular degeneration, so it’s important to regularly eat foods that contain it.

Fucoidan – Bladderwrack contains impressive levels of fucoidan, a sulfated polysaccharide that exists in the cell walls of most brown algae. According to a May 2003 study by researchers Maruyama, Tamauchi, Hashimoto, and Nakano, fucoidan has the ability to inhibit tumor growth. Another study has shown that fucoidan possesses anti-viral properties. These benefits, coupled with the fact that fucoidan regulates the production of AP-I (which, in turn, regulates cell proliferation), makes bladderwrack and other fucoidan-rich foods highly effective at combating cancer.

Aside from the nutrients mentioned above, bladderwrack also contains varying levels of calcium and magnesium (needed for superior bone health), protein (needed for cell growth and repair), and numerous trace minerals such as potassium, zinc, selenium, iron, chlorophyll, phosphorous, bromine, and the much-needed antioxidant vitamin C.