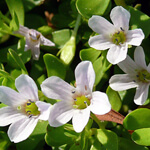 Bacopa monnieri, also called brahmi and water hyssop, is a thick-leafed herb that favors wet and muddy locations in East Asia, Southeast Asia, and southern parts of the United States. It is characterized by its green leaves and white flowers, and has been used in Ayurvedic medicine for centuries thanks to its considerable healing properties, especially in relation to mental health. It is relatively inexpensive to buy from health food stores, and is usually consumed as a powder.

Improves brain function – According to numerous studies, bacopa can noticeably improve cognitive function and mental performance. A study presented in 1996 at the International Brain Research Conference, for instance, demonstrated that a regular consumption of bacopa reduced the time we needed to learn new tasks by almost 50 percent! Another study by researchers at the University of Wollongong in Australia showed that bacopa improves memory and recall abilities, while a similar study – conducted in 2012 by researchers at Khon Kaen University in Thailand – proved that participants who took bacopa for a 12-week period scored far better in mental processing tests than those who took the placebo. According to the University of Michigan Health System, the reason why bacopa is good for the brain is because it contains bacosides, which are chemical compounds that can repair damaged neurons, thus improving nerve impulse transmission.

Prevents mental diseases – According to a study published in the Journal of Alternative and Complementary Medicine, elderly volunteers who took 300 milligrams of Bacopa monnieri daily demonstrated greater improvement in the areas of attention and verbal information processing that those who took the placebo. For this reason, the study authors concluded that a regular consumption of bacopa is an excellent guard against age-related cognitive deterioration, as well as mental diseases like Alzheimer’s disease and dementia.

Improves mood – You’re probably noticing a trend here: Bacopa is good for the mind, period! Yes, bacopa is also linked to improved mood (including relief from depression, anxiety, stress, and nervousness) because its chemical properties support the effects of mood-regulating neurotransmitters such as serotonin and acetylcholine. This makes it an excellent natural anti-depressant that lacks the side effects of conventional mood enhancing drugs like Prozac and Xanax.

Improves digestive health – Though it is best-known for its cognitive improvements, Bacopa monnieri is not a one-trick herb. It also supports the production of beneficial mucus in the gastrointestinal tract, thereby guarding us from stomach ulcers, intestinal dryness, and constipation. Also, since bacopa protects the villi in the intestine (which are responsible for absorbing nutrients), it also helps us to absorb more important vitamins and minerals from our food. For this reason, lots of people like to take bacopa before or during a meal.

Improves respiratory health – Bacopa monnieri has been shown to relax bronchioles, which often become irritated or inflamed from respiratory conditions such as asthma or stress-induced shallow breathing. Bacopa also relaxes the blood vessel muscles around our airway passages, which improves our breathing quality.

The Need for Patience

It’s important to note that, like many other herbs that benefit our mental health (such as St. John’s wort or Ginkgo bilboa), bacopa takes time to work. Taking 150 milligrams of it three times per day over a two or three-month period will provide better results than taking the same amount over a one-month period. So, if you’ve decide to try out bacopa, give it time; most medicinal herbs reward patience.