A List of Foods Rich in Manganese: From Mussels to Hazelnuts 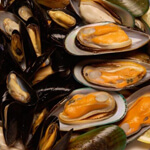 Manganese is a trace mineral that is present in only small amounts in our bodies. It is considered an essential nutrient and is responsible for a large number of biological roles, including proper enzyme functioning, wound healing, nutrient absorption, and bone development. Manganese is also a component of the antioxidant enzyme superoxide dismutase (SOD), which helps fight cell-damaging free radicals.

According to the University of Maryland Medical Center, up to 37 percent of the American population fails to meet the recommended daily intake (RDI) of manganese, which is 2.3 milligrams for adult men and 1.8 milligrams for adult women. Over time, this can lead to deficiency symptoms such as joint pain, poor bone health, and fertility problems. Therefore, it’s important that we eat enough foods rich in manganese to maintain our health.

Nuts – Nuts are one of the best sources of manganese for vegetarians and vegans. One 28 gram serving of hazelnuts, for instance, supplies us with 78 percent of our RDI. Pecans, macadamia nuts, and walnuts also contain over 40 percent of our RDI per 28 grams. Other nuts, such as almonds, cashews, and pistachios, contain fewer (but still high) concentrations of manganese.

Aside from their manganese content, nuts are also a good source of omega-3 fatty acids, vitamin E, plant sterols (which are known to reduce LDL cholesterol), and L-arginine, a semi-essential amino acid that can boost cardiovascular function. Some people like to soak their nuts in water before eating them, since soaking mimics the natural germination process that occurs in nature, which helps neutralize anti-nutrients and activate certain enzymes.

Seeds – Seeds often contain similar nutritional profiles to nuts, so it isn’t surprising that they’re also high in manganese. Pumpkin seeds seem to be the best source, containing 1.3 milligrams of the mineral (64 percent of the RDI) per 28 gram serving. Chia seeds, sesame seeds, flaxseeds, and sunflower seeds are also excellent sources, with one 28 gram serving of each providing us with at least 30 percent of our RDI of manganese.

Seeds also tend to be rich in zinc, magnesium and beneficial plant compounds called phytosterols. Like nuts, seeds (especially chia seeds) benefit from being soaked in water before consumption.

Beans – Beans are one of the longest-cultivated crops and have been an important source of protein throughout the Old and New World. They are also consistently high in manganese. Half of a cup (85 grams) of lima beans and winged beans, for example, contain just over half of our RDI. Chickpeas, adzuki beans, and white beans are packed with manganese as well.

Other excellent sources of manganese include leafy green vegetables such as spinach and kale, most dried herbs and spices (especially cloves), rice bran, garlic, blackstrap molasses, and sun-dried tomatoes. Most whole foods contain small amounts of manganese, however, which is why people who eat a diet rich in organic whole foods are rarely deficient in it.