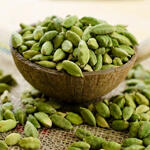 One of the easiest and healthiest ways for us to stay warm during the coldest times of the year is to eat more so-called “warming” foods. Warming foods, which ancient Chinese medicine referred to as “yang” foods, are foods that contain one or more active compounds that help raise our core temperature – often by boosting blood circulation or removing excess water from our tissues. Seeds, nuts, oats, garlic, and onions are classic examples of traditional warming foods.

However, some of the greatest warming foods can be found in the spice kingdom. In fact, a disproportionate number of popular and widely available spices are unusually effective at inducing thermogenesis. The five spices listed below, which can all be consumed in supplemental or whole form, seem to be especially effective in this regard.

The aromatic and fragrant seeds of the popular herb cardamom, which is indigenous to south India and Sri Lanka, are well-known for their high concentrations of natural cineol. A proven expectorant (a medicine that helps loosen mucous congestion in the lungs and respiratory passages), cineol is known to have a stimulating effect on our lungs which, in turn, raises our core temperature. Cardamom also stimulates our digestive system and helps promote the elimination of gas.

Perhaps the most popular warming food in the West today is cinnamon, a sweet and aromatic spice obtained from the inner bark of the Ceylon cinnamon tree. The astringent actions of the tannins in cinnamon have a drying and toning effect on the mucus membranes of our bodies, thus raising our temperature. Additionally, cinnamon is a natural anticoagulant (blood thinner) that can increase blood circulation and boost metabolic activity.

For centuries, the Ayurvedic healing system of India classified turmeric as one of the best warming herbs, and science now understands why. Like cinnamon, turmeric is rich in a huge number of astringent tannins that help tighten tissues and absorb excess water from the body. This results in a “drying” effect that raises our overall body temperature. Moreover, turmeric is high in an active compound called curcumin that is proven to normalize blood circulation and improve blood vessel health.

Though it is most famous for treating nausea and upset stomachs, the rhizome of the popular ginger plant possesses considerable warming effects due to its dense concentrations of heat-producing oils called gingerols and shogaols. Like cinnamon and turmeric, which actually belong to the same Zingiberaceae family as ginger, ginger also improves circulation to all parts of the body.

Cayenne pepper, also called the Guinea spice, is a member of the nightshade family and is usually consumed in powdered form. Its trademark heat and warming effects, which greatly exceed that of most other red peppers, is attributed to its high levels of the active compound capsaicin. For example, a study published in the Journal of Biological Chemistry in 2008 showed that capsaicin possessed thermogenic properties. The study authors also noted that capsaicin is a “naturally occurring vanilloid, the consumption of which is linked with increased metabolic rate and core body temperature.”