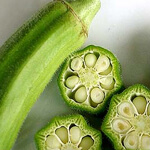 Constipation is one of the most common conditions affecting Americans today. In fact, the American Society of Colon & Rectal Surgeons claims that approximately 80 percent of people will suffer from infrequent bowel movements at some point in their lives. While environmental changes, improper hydration, and a lack of exercise often contribute to short-term constipation, the overwhelming cause of chronic blockages is poor diet. Indeed, since the advent of processed foods, the average American consumes a mere 12 to 15 grams of fiber per day – far less than the recommended 25 to 30 grams.

Though consuming more fiber-rich whole foods is an effective way to treat constipation, there is another type of food that is particularly potent in this regard: mucilaginous foods. These are foods rich in mucilage, a thick, gooey substance that slides down the intestinal tract when consumed and sweeps it of accumulated waste. The three foods listed below are especially high in mucilage, making them a great choice for treating long-term irregularity.

Perhaps the best-known mucilaginous food is okra, a tall, flowering plant cultivated in many warm regions of the world. This plant bears edible green pods which, when cooked, transform into a rather slimy mess – a testament to their dense concentrations of mucilage. This mucilage is proven to lubricate the intestine as it passes through, soothing inflamed areas, absorbing excess water and toxins, and flushing out the colon.

Many studies have proven okra’s intestinal benefits. For example, a study published in the Public Library of Science found that okra pods possessed significant antiadhesive properties (i.e. they can remove the adhesive between bacteria and stomach tissue, preventing destructive bacterial cultures such as Helicobacter pylori from proliferating). Another study published in the Journal of Pharmacy and Bioallied Sciences discovered that the gentle, soft-textured fiber in okra can “stabilize blood sugar by regulating the rate at which sugar is absorbed from the intestinal tract.”

Slippery elm is a species of elm native to eastern North America. As the name suggests, the tree is packed full of mucilage, and its inner bark was used by American settlers for decades to treat gastrointestinal complaints such as indigestion, inflammation, and constipation.

Slippery elm powder is easy to find online or in health stores, and makes a fantastic tea that is a proven demulcent as well as a laxative. One study published in the Journal of Alternative and Complementary Medicine, for instance, found that a formulation comprised of several natural medicines (including slippery elm bark) “significantly improved both bowel habit and IBS symptoms in patients with constipation-predominant IBS.”

Chia seeds are the oval-shaped, multicolored seeds of the Central American chia plant. Despite being being dry and hard in their default state, these highly nutritious seeds contain surprisingly high levels of mucilage. Soaking them in water for at least 30 minutes makes this fact quite evident – the seeds become coated in a slippery gel and start to resemble frogspawn!

Consuming two or three tablespoons of these water-infused chia seeds, ideally first thing in the morning before food, is a great way to hydrate the body and flush out the colon. Their mucilaginous nature also makes them a suitable digestive aid for individuals suffering from stomach discomfort after eating a meal.