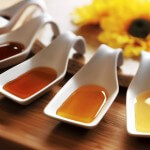 Although molasses is an extremely healthy sugar substitute that has been a staple in the American diet since pilgrims first visited the continent, it is certainly an acquired taste. Depending on the type of molasses you’ve tried, you might find it too sweet, too sour, too sugary, too rich, or simply just too difficult to obtain in the region in which you live. Fortunately, there are several substitutes to consider. Some of the substitutes are better-known than others, but they all have the same qualities in common, namely, that they’re pleasant-tasting and contain a thick consistency that lends them well to desserts and sweeter dishes.

Honey is arguably the healthiest and most popular molasses substitute. A golden-colored liquid produced by bees, honey was used for centuries as both a sweetener and preservative. Aside from having excellent antioxidant and anti-bacterial properties that make it a great immune system booster, honey is an absolutely superb natural energy booster that helps to prevent fatigue during exercise. Probably the biggest reason why honey is considered the best molasses substitute, however, is its taste. Whereas the taste of molasses varies from sweet to bittersweet to downright unpleasant, honey is consistently pleasant-tasting regardless of its source.

Remember, however, that if you want the best honey, you’ll need to get raw honey. Raw honey is honey that wasn’t treated after removal from the hive, meaning that its nutrients remain intact. “Pure” honey and “natural” honey (two misguiding labels beloved by advertisers) are not the same as raw honey – they are inferior, processed types.

Like honey, barley malt is a golden-colored, sweet, thick liquid that is used to sweeten and improve the tastes of foods such as bread, ice cream, baby foods, breakfast cereals, and bagels. It is also used as a sweetener for tonic beverages, and I don’t think we need to elaborate on barley malt’s key role in the brewing of alcoholic and non-alcoholic beer.

Barley malt extract is a great substitute for molasses because, aside from its parallel aesthetic qualities, it is also nutritious. An easily-digestible protein that is high in amino acids and vitamin B, as well as a stool softener that is used to treat constipation in children, barley malt extract can function as a standalone nutrient supplement as well as an important cooking ingredient.

A classic choice of sweetener for generations, maple syrup is a fantastic-tasting molasses substitute that is commonly consumed with pancakes, porridge, French toast, waffles, oatmeal, and much more. Surprisingly, it is also healthy. Commercial maple syrup contains fifteen times more calcium – an important mineral for bone and tooth health – than commercial honey, and it has also been studied for its antioxidant and trace mineral properties.

The three products listed above are arguably the best molasses substitutes when taste, nutritional qualities, and aesthetic similarities to molasses are considered. However, other substitutes are available if you’ve yet to find an appealing one. Consider the following:

Finally, there is one more point to make – the word “treacle” is the British equivalent of molasses. Therefore, if you’re considering purchasing a molasses substitute and find an item called “treacle,” bear in mind that it is molasses under a different name!