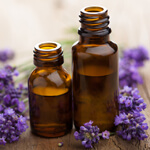 The lavender plant, which is native to the Old World and is characterized by its beautiful hues and invigorating fragrance, has been used for more than 2,500 years as a cosmetic aid. The ancient Egyptians and Phoenicians, for instance, would use lavender as a natural perfume. The Romans loved to use lavender to scent their baths (in fact, “lavender” is derived from the Latin “lavare,” which means “to wash”), while the people of Medieval and Renaissance Europe used lavender to deodorize the stone floors of their castles.

Despite its significant cosmetic benefits, however, lavender is also a medicine of considerable potency. This is especially true of its oil, which is widely regarded as one of the most versatile essential oils in existence.

In 1910, the French chemist Rene-Maurice Gattefosse burned his hand during an experiment and plunged it into the nearest tub of liquid for relief – a liquid that happened to be lavender oil. To Gattefosse’s surprise, the oil both healed his burns and prevented deep scarring. From that point onwards, lavender oil became known across Europe as a potent natural analgesic.

The vapor of lavender oil contains antibacterial properties and, when inhaled, can help soothe respiratory issues, such as sinus congestion, throat infections, whooping coughs, the flu, and tonsillitis. For this reason, lavender oil is often a main ingredient in commercial vaporizers and inhalers.

A Scottish study published in July 2009 found that 44 percent of alopecia patients exhibited new hair growth when they massaged their scalp daily with lavender oil (and other essential oils) for seven months, suggesting that lavender oil could be a promising natural remedy for alopecia, male pattern baldness, and other hair-related problems. Lavender oil is also good at disinfecting the scalp and killing head lice.

Research shows that lavender and its oil can help heal damaged skin. For example, a 2010 study published by the Japanese Society of Anti-Aging Medicine noted that lavender and rosemary “increase scavenging activity against free radicals, thereby showing defensive effects against oxidative stress in the body.”

Since free radicals are major contributors to serious degenerative diseases like arthritis and cancer, it’s possible that lavender oil contains even greater healing properties than we currently appreciate. Unfortunately, research into its disease-fighting properties remains limited.

The same properties that make lavender good for healing damaged skin also make it good for boosting blood circulation. In fact, lavender oil is acknowledged as a “warming” oil and has, at various points in history, been used to treat both high blood pressure and low blood pressure through topical application. Moreover, regularly boosting our blood circulation with lavender oil could also reduce our risk of heart disease, since this life-threatening illness is often triggered by poor blood flow.