Walnuts: The Perfect Food for Our Brains 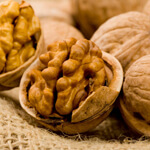 Walnuts are the large, single-seeded fruits of the walnut tree. Though different species of walnut exist, the English walnut, which originated in Persia, remains the most popular species. In fact, virtually all of today’s commercially-produced walnuts are either English walnuts or hybrids thereof. Other species of walnut, such as the black walnut, are seldom cultivated due to their comparatively tough shells and poor hulling qualities.

Walnuts are highly nutritious, and their health benefits have been well-known in China and India for centuries. They are just as revered in the West, however, and a large number of studies confirm the allegations of the ancient healing systems.

Packed with brain-boosting fats – Walnuts are rich in omega-3 and omega-6 fatty acids, particularly the plant-based omega-3 fat, alpha-linolenic acid. These beneficial fats, which are the same fats that comprise our brains and nervous systems, give walnuts considerable brain-boosting properties. For example, a study published in Plant Foods for Human Nutrition in November 2011 discovered that rats that were fed walnuts for 28 days demonstrated a “significant improvement in learning and memory” compared to the control group. A second study, published two years later in Nutritional Neuroscience, showed that the fatty acids in walnut extracts could prevent age-related inflammation and oxidative stress in the brain’s hippocampal cells.

Studies have also linked the regular consumption of walnuts to numerous other brain-related benefits, including the prevention of neurodegenerative diseases such as dementia and Alzheimer’s disease, and improved inferential reasoning, concentration spans, and interneuronal signaling. Just like coconut oil, another food that boosts cognitive function, almost all of these benefits stem from walnuts’ high concentrations of beneficial fats.

Cancer prevention – According to a study published in The Journal of Nutrition in April 2014, mice that were implanted with human breast cancers and fed a walnut-based diet experienced a gigantic 80 percent decrease in tumor growth rate compared to the control group. The study also found that walnuts slowed the growth of colon, prostate, and renal cancers in mice, with whole walnuts providing the biggest benefits. The researchers attributed these results to certain antioxidant compounds in walnuts, such as tocopherols, beta-sitosterol, and pedunculagin, which possess anti-cancer properties.

Strengthen the cardiovascular system – Foods rich in beneficial fats are known to improve our cardiovascular systems, and walnuts are no exception. A recent study published in The Journal of Nutrition, for instance, discovered that walnuts have been shown to decrease “bad” LDL cholesterol and blood pressure. Consequently, the researchers recommend that people add more walnuts to their diets to help prevent cardiovascular disease. Emerging evidence also suggests that walnuts can boost endothelial function, making them a viable treatment for type II diabetes.

Good source of additional nutrients – Though walnuts’ rich supplies of good fats will always be their biggest draw, we shouldn’t overlook their surprisingly high concentrations of nutrients, which include calcium, iron, magnesium, phosphorus, zinc, and most B vitamins. Walnuts are especially high in magnesium, an essential macromineral in which an estimated 50 to 80 percent of the United States population are deficient. Like most nuts, walnuts are also a good source of protein, though the protein is incomplete (i.e. it doesn’t contain all eight essential amino acids).

Walnuts are best eaten raw. While a lot of people dislike their bitter skins, these skins contain up to 90 percent of the fruit’s main cancer-fighting antioxidants, so ensure that they’re eaten too.