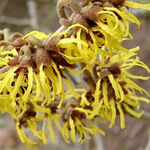 Common witch hazel, also called winterbloom, is a flowering shrub native to the forest margins, woodlands and stream banks of eastern North America. It is characterized by its fragrant, gold-colored flowers, which tend to grow in late fall and continue to expand throughout winter.

Despite its somewhat sinister name, witch hazel is a plant of considerable medicinal value and has been pressed, boiled, and steamed for human usage for centuries. The American Indians were particularly fond of witch hazel and used it to treat swelling and inflammation. Even the Food and Drug Administration, which is not known for being kind to natural remedies, approved the plant as a non-prescription drug ingredient.

Though witch hazel can treat internal conditions such as sore throats, it is best known for treating external skin conditions due to its proven astringent properties.

Treats Acne and Other Skin Disorders

Due to its significant antibacterial and antiseptic qualities, which can make short work of destructive skin bacteria such as Propionibacterium acnes and Staphylococcus epidermidis, witch hazel is a fantastic natural remedy for skin conditions like acne, psoriasis, and eczema. Moreover, the catechol tannins in witch hazel help remove excess oil from the skin, making it effective at treating blackheads and other blemishes caused by an accumulation of dried sebum in the pores.

There’s a good reason why witch hazel extract is a main ingredient in many skin protectant drugs such as Preparation H Cream: This beautiful plant is extremely effective at shrinking blood vessels, which, in turn, tightens our skin. This makes witch hazel the premier natural remedy for discoloration and puffiness under and around our eyes. Additionally, witch hazel can reduce the appearance of, and pain associated with, varicose veins and hemorrhoids. Just soak a cotton pad in organic witch hazel oil and apply it to the affected area for between five and eight minutes.

Witch hazel’s ability to shrink blood vessels and tighten skin also makes it an excellent choice for treating cuts, scrapes and other wounds that lead to minor bleeding. Furthermore, witch hazel can accelerate the speed by which bruises heal, since it helps increase the blood flow near the skin’s surface, thus dispersing any blood that has pooled in the bruised area.

Witch hazel is a potent anti-inflammatory that can help soothe itching associated with insect bites, poisonous plant contact and even diaper rashes. A study published in the International Journal of Trichology in July 2014 even found that shampoos and tonics that used common witch hazel as a main ingredient could reduce the irritation associated with dermatological conditions such as a red or sensitive scalp.

Refreshes and Rejuvenates the Skin

Since witch hazel is usually used to treat existing skin conditions, people often forget that it is also good at refreshing and rejuvenating regular, healthy skin. For example, applying some organic witch hazel oil to our face can help seal in moisture and refine the pores. Aside from improving our looks and providing anti-aging benefits, using witch hazel in this way can also guard us from environmental pollutants and other external toxins that are responsible for so many skin problems in the first place.